Christiane Amanpour: 'Extremists' in America 'Whip Up Hatred' in Libya

ABC journalist Christiane Amanpour on Wednesday compared the rioting and murder that followed Middle Eastern anger over an anti-Islamic movie to yelling "fire in a crowded theater." Regarding filmmaker Sam Bacile and the killing of U.S. ambassador Christopher Stevens in Libya, Amanpour derided, "So, now, one has to, really, try to figure out the extremists in this country and the extremists out there who are using this and whipping up hatred." [See video below. MP3 audio here.]

Amanpour appeared on Good Morning America to discuss Bacile and his little-seen film. Talking to George Stephanopoulos, she asserted that the movie mocks the prophet Mohammed, portraying him as "a womanizer, a pedophile, a thug, and generally denigrate[s] Islam." Seemingly debating the need for some kind of self-censorship, Amanpour added, "There is also 100-year law by the United States Supreme Court, which says you can't cry fire in a crowded theater."

The former This Week anchor described the movie as a "deliberate provocation at a transitional time."

Amanpour has long tried provided a relativistic take on religious intolerance. While at CNN, she created a series called God's Warriors. While the 2007 programs did look at Muslim extremists, she covered a very conservative Christian ministry. After reading off rules such as no short skirts and no dating, Amanpour marveled that this made her think of "totalitarian regimes."

When the evangelical pastor she was speaking to denied such a charge, saying that short skirts distract men, Amanpour slimed, "But, Ron, that's what the Taliban said. They kept women in their house, because men couldn't be trusted around them."

A transcript of the September 12 segment, which aired at 7:05am EDT, follows: 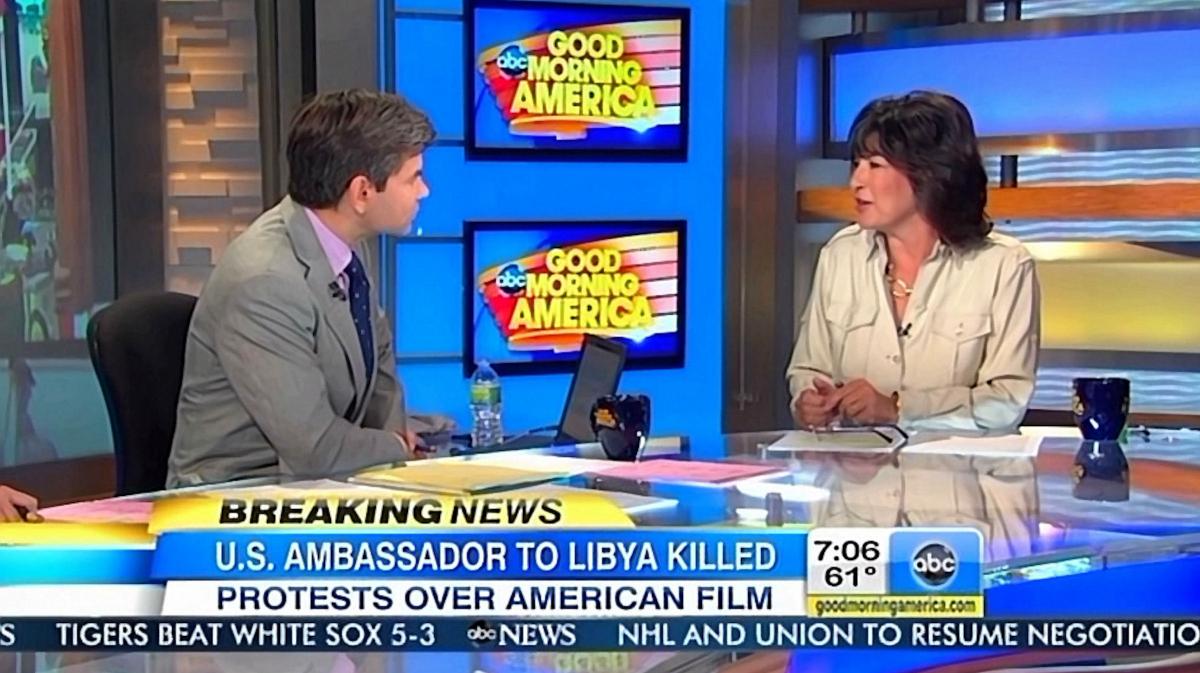 STEPHANOPOULOS: Christiane Amanpour by my side. Just back from the region. Let's start out, what more do we know about this film and the filmmaker?

CHRISTIANE AMANPOUR: Well, not a huge amount. He's been described as a California real estate. He describes himself as an Israeli. He's talked publicly since going into hiding, remaining defiant, saying that Islam is a cancer, as Martha said. And saying this was a deliberately provocative film to show, as he said, Mohammed is a fraud. And clearly the film showed him as a womanizer, a pedophile, a thug, and generally denigrated Islam. Now, there is, obviously, freedom of expression in this country. There is also 100-year law by the United States Supreme Court which says you can't cry fire in a crowded theater. So, now, one has to, really, try to figure out the extremists in this country and the extremists out there who are using this and whipping up hatred.

STEPHANOPOULOS: And, of course, you covered the protests in the Arab Spring. What we're seeing is the consequences of more freedom in the Middle East.

AMANPOUR: Yes. More freedom. I've spoken to the prime ministers of Egypt and the new leader of Libya. They say that they want good relations with the United States. But what's happening here is deliberate provocation at a transitional time. So, while this film came out, and was kind of hidden in the internet, blogosphere for a while, until it got an Arabic subtitle, an Arabic soundtrack. Then it started to became prominent. And local imams started to whip up the fervor against it.

STEPHANOPOULOS: And the current regimes don't have the same kind of control.

AMANPOUR: Well, they do and they don't. In Egypt, there's a military, there's a police out there. It's still standing and they do have control. In Libya, it's slightly more, sort of, chaotic, still, in terms of bringing militants in and trying to arrange the full security process there. But this is something that really has to be watched as we go forward because there is a transition. And by and large, it's pro-American in that region.