All three evening newscasts on Tuesday and the morning shows on Wednesday skipped a new Super PAC ad (run by former Obama spokesman Bill Burton) that blames Mitt Romney for a woman's death from cancer. While ignoring that, NBC, ABC and CBS made sure to highlight negative news for Romney or White House complaints about the Republican's new campaign spots.

By contrast, CNN on Tuesday demolished the Obama super PAC ad as "not accurate." Anchor Wolf Blitzer asserted it was "full of falsehoods." The spot misleadingly claims that Ranae Soptic passed away from cancer shortly after Bain Capital closed down the steel plant her husband worked at. In reality, she died five years later. Instead of investigating this, Good Morning America's Josh Elliott on Wednesday alerted, "Our new ABC News/Washington Post poll finds [Romney's] personal popularity sinking to a new low, the lowest of any presumptive nominee since 1984." 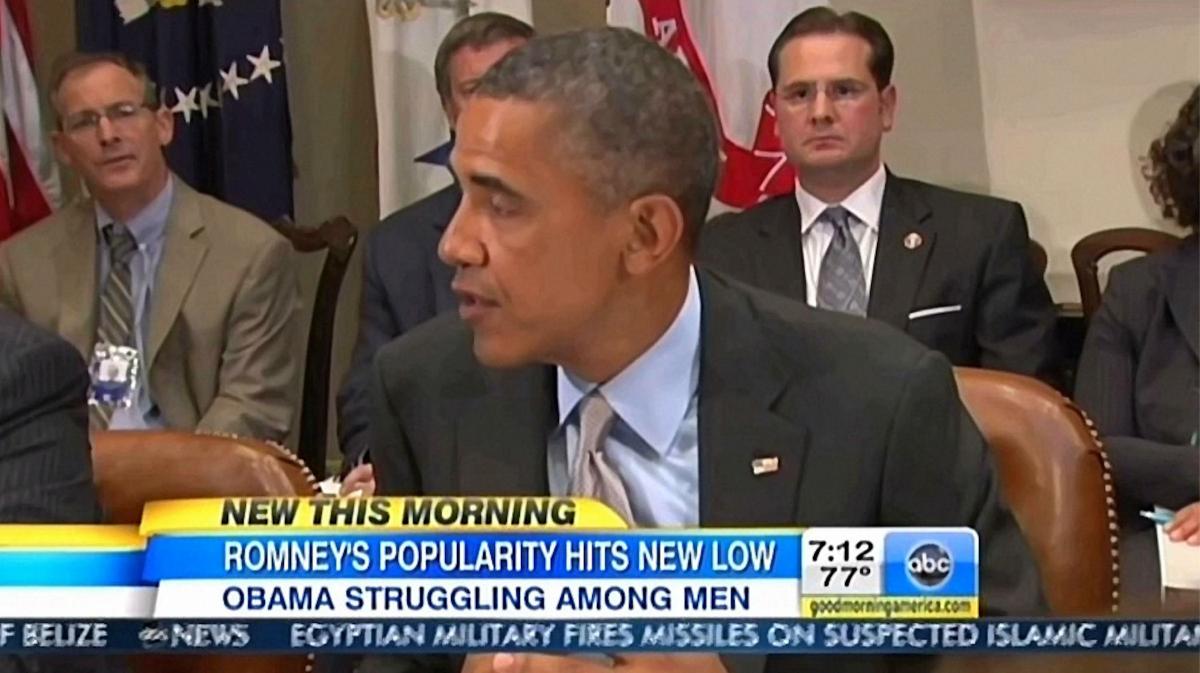 Amazingly, NBC Nightly News anchor Brian Williams portrayed both sides as "getting personal in the race for the president." He added, "Tonight, what the candidates are now calling each other."

Still, there was no mention of Mr. Soptic. In the Priorities USA spot, he says this:

When Mitt Romney closed the plant I lost my healthcare, and my family lost their healthcare," Soptic says in the ad put out by Priorities USA Action, the main pro-Obama super PAC. "A short time after that, my wife became ill. I don’t know how long she was sick and I think maybe she didn’t say anything because she knew we couldn’t afford the insurance.

Williams haughtily lectured, "Now to the campaign trail, where the dialogue has become a bit less than presidential in the past few days."

Here's CNN's debunking of the ad:

It's a very heart-wrenching story, but it’s not accurate. Here is the actual timeline:

Romney stopped his day-to-day oversight at Bain Capital in 1999 when he left to run the Salt Lake City Olympics, though he officially remained CEO until 2002. Bain Capital shut down GST Steel in 2001, costing Soptic his job.

According to Mr. Soptic, his wife received her primary insurance through her employer – a local thrift store called Savers – and retained it even after his layoff. Soptic's policy through GST Steel was her secondary coverage. 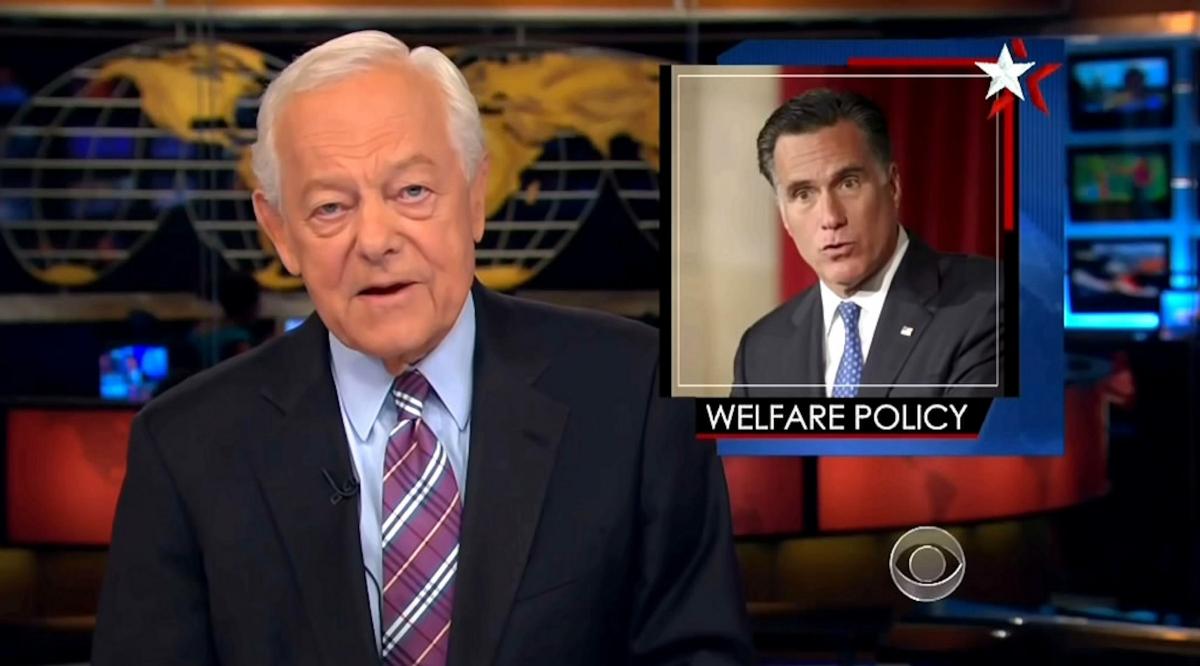 On the CBS Evening News, anchor Bob Schieffer ignored the vicious spot by Obama supporters and instead noted Romney's assertion that "if elected he will make sure that welfare recipients are required to work." Schieffer added that the Republican slammed the President for "creating a culture of dependency. The host made sure to parrot the White's House's complaints about Romney's"categorically false and blatantly dishonest" assertions.

On Wednesday, Jan Crawford also skipped the "Romney-killed-my-wife" commercial and highlighted Obama's defense of changes to welfare: "The White House says the order gives states flexibility in how they provide welfare to low-income residents."

Crawford went on to point out spokesman Jay Carney's denunciation of Romney's claims, as well as Bill Clinton's.

NBC's Today, Wednesday, avoided the presidential race all together. World News on Tuesday offered a Jon Karl report on vice presidential speculation. The hosts of Morning Joe did press former Obama aide Robert Gibbs to denounce the ad. He refused.

Is anyone unclear as to what would happen if a conservative, Romney-related super PAC released an ad falsely implicating Obama in a woman's death?

A transcript of the August 8 GMA news brief and the August 7 Evening News report can be found below: 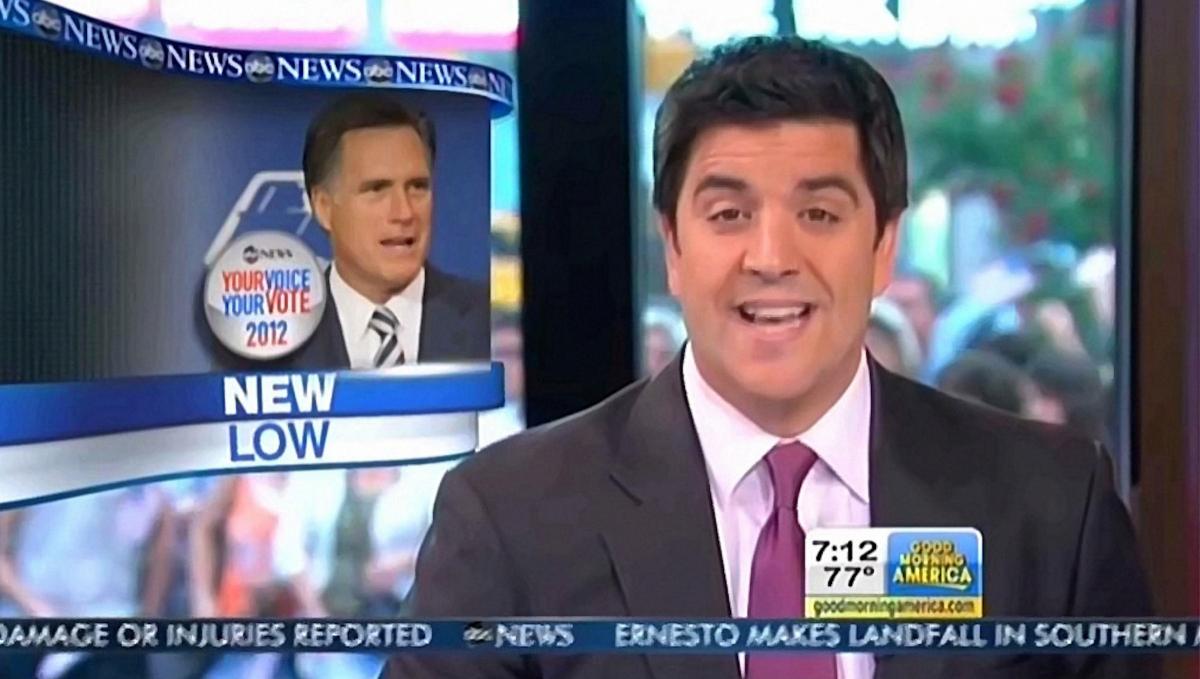 JOSH ELLIOTT: Turning now to politics. A new challenge for Mitt Romney this morning. Our new ABC News/Washington Post poll finds his personal popularity sinking to a new low, the lowest of any presumptive nominee since 1984. President obama enjoys higher popularity, but still faces a major challenge among men.

BOB SCHIEFFER: In the presidential campaign, Republican Mitt Romney vowed today that if elected he will make sure that welfare recipients are required to work. He criticized President Obama for giving states more leeway on that, saying the president is creating what he called a culture of dependency. The White House called Romney's accusation "categorically false and blatantly dishonest" noting that as governor of Massachusetts Romney himself had asked for waivers on the work requirement.