Birtherism really makes Jake Tapper mad. The Good Morning America journalist on Wednesday angrily attacked the untrue conspiracy theory as "bizarre," "fact-free" "nonsense." Tapper highlighted Donald Trump's support of Mitt Romney and warned that Republicans think the real estate mogul "undercuts his seriousness and suggests [Romney is] not willing to stand up to even the most offensive and false nonsense from that wing of his party."  [See video below. MP3 audio here.]

Yet, while Tapper appeared shocked at Trump's comments and dropped his objectivity to report on them, he has not covered (on air) the offensive statements spewed by comedian/political analyst Bill Maher, who donated $1 million to Barack Obama's campaign. Maher has mocked Mitt Romney's Mormonism as a "cult." This past weekend, he speculated that the presumptive Republican presidential nominee has multiple wives. GMA and Tapper haven't corrected these "bizarre" comments from a major Obama donor.

Tapper lectured, "...Romney risks being overshadowed by Donald Trump who keeps bizarrely attacking the President, falsely, for not being born in the United States."

He continued, lamenting, "Overnight, Mitt Romney was raising money with Donald Trump, who is on a fact-free tear, spewing birther nonsense, alleging the President was not born in the U.S."

Clearly, Tapper views Romney campaigning with Trump as a gaffe. Yet, Obama made a major gaffe, Tuesday, falsely referring to "Polish death camps" when he meant Nazi camps. Tapper covered this online, but not on GMA.

Tapper has repeatedly gotten indignant over birtherism. On April 12, 2011, he describe it as "non-reality-based." Yet, 9/11 Truther Rosie O'Donnell has appeared on GMA a number of times. The hosts on the ABC program failed to question O'Donnell on her conspiracy theory, a theory that Tapper might call "bizarre."

A transcript of the May 30 segment, which aired at 7:07am EDT, follows:

GEORGE STEPHANOPOULOS: We're going to go to the presidential race right now. Mitt Romney went over the top last night, formally clinching the nomination with a win in Texas. But those over the top comments from Donald Trump stole some of the headlines. And Romney is facing a new attack this morning from the Obama campaign. It's your voice, your vote with ABC's Jake Tapper. Good morning, Jake. 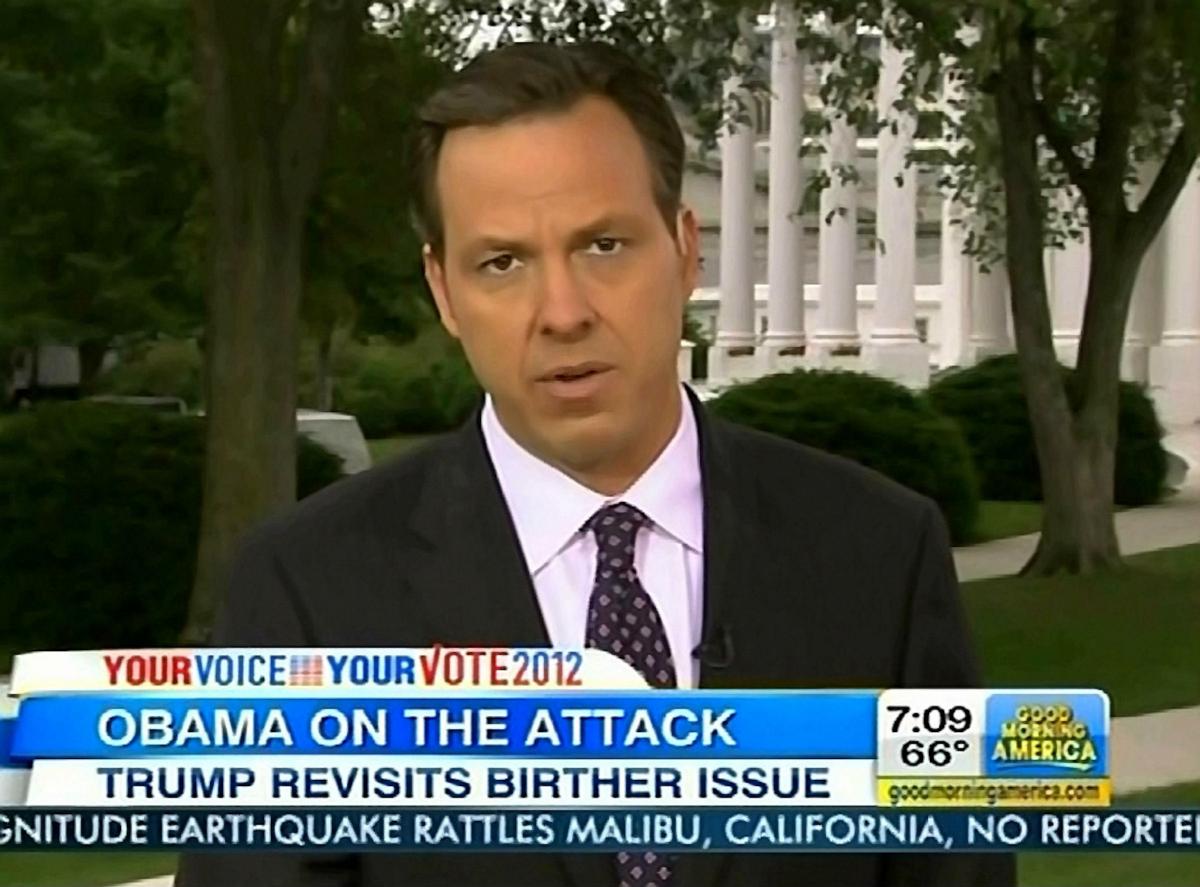 JAKE TAPPER: Good Morning George. That's right. ABC News has learned that starting this morning, the Obama campaign will open up a new front in their attacks on Mitt Romney, going after his record as governor of Massachusetts, when the state of Massachusetts ranks 47th in the nation in job creation. This comes at the same time, as you mentioned, when Romney risks being overshadowed by Donald Trump who keeps bizarrely attacking the President, falsely, for not being born in the United States. Overnight, Mitt Romney was raising money with Donald Trump, who is on a fact-free tear, spewing birther nonsense, alleging the President was not born in the U.S.

DONALD TRUMP: A lot of people do not think it was an authentic certificate.

WOLF BLITZER: How can you say that if-

TRUMP: You won't report it, Wolf, but any people do not think it was authentic.

BLITZER: Donald, Donald, you're beginning to sound a little ridiculous. I have to tell you.

TAPPER: Republicans say it's risky for Romney to continue to appear with Trump, since it undecuts his seriousness and suggests he's not willing to stand up to even the most offensive and false nonsense from that wing of his party.

MITT ROMNEY: You know, I don't agree with all the people who support me. And my guess is they don't agree with everything I believe in. But I need to get 50.1 percent or more. And I'm appreciative to have the help of a lot of good people.

TAPPER: For their part, this morning, the Obama campaign will launch a new line of attacks. Saying Romney made all of the same promises when he ran for governor ten years ago and the results were less than stellar. Take job creation, for instance. He told this to college students in 2002.

ROMNEY:  This is a critical election for you. This may determine whether or not there's a job waiting at the end of your graduation.

ROMNEY: When you get out of college, if I'm president, you'll have a job. If President Obama's re-elected, you will not be able to get a job.

TAPPER: The attack, as Obama campaign adviser David Axelrod tweeted last week, quote, "He sold the same hooey in Massachusetts ten years ago. And then turned in one of the worst performances as any governor in the USA. 47th in job creation."  Then, as now, Romney sold himself as a conservative businessman who could right the economic ship.

ROMNEY: I have experience in the private sector, building and creating thousands of good jobs and I want to bring that skill for you here in Massachusetts.

TAPPER: And the Obama team will use officials from Massachusetts to make that attack, starting tomorrow. In response,  the Romney campaign says, George, "Romney created more jobs in the state of Massachusetts than President Obama has for the entire nation. We're happy to compare the 4.7 percent unemployment rate Mitt Romney was able to accomplish any day  against President Obama's failure to meet his own goal of six percent right now."

STEPHANOPOULOS: And, Jake, the Romney campaign, in their ads, keeping the bull's eye on the President's jobs record. Take a look.

ROMNEY AD: To create jobs. How is he doing? You've heard of Solyndra. They took $535 million in taxpayer loan guarantees and went bankrupt.

STEPHANOPOULOS: They saying this is the response to the President's teams attacks on Bain Capital.

TAPPER: That's right. They're trying to make it appear as though President Obama is a venture capitalist and the stimulus and the auto bailout were his funds for investing and he failed as well. You're going to see the Romney campaign focus laser-like on the economy. And the Obama campaign try to make Mitt Romney an unacceptable alternative, even as the President is under water in his approval rating, George.