The journalists at Good Morning America on Friday altered a quote from an ESPN reporter, turning a question about Tim Tebow into a declaration that the faith of the quarterback is why he's such an "astonishingly polarizing," "divisive figure."

GMA's Elliott played clips of the ESPN interview during the segment and Bayless did explore this line of discussion. In a later question, he challenged, "So, being that guy, that polarizing figure, doesn't really bother you?"

However, it's disingenuous for ABC to edit out the words "do you believe," thus distorting a question into a declaration, changing Bayless's meaning.

Earlier in the segment, Elliot chided that Tebow is "drawing criticism from some corners. Some saying Tim Tebow has made his faith too visible." 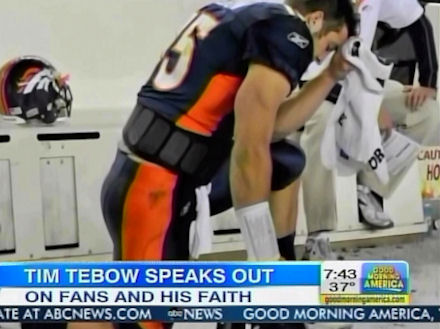 ABC did include a snippett of Tebow's "astonishingly polarizing" answers, such as this one on the practice of Tebowing: "...Whether I win or lose, hero or goat, I'm still going to be the same person. I'm going to treat others the way I want to be treated. I'm going do my best and I'm going to do what's right."

The full ESPN interview can be found here. Go to two minutes and 48 seconds in to see the unedited question.

A transcript of the February 3 Good Morning America segment, which aired at 7:45am EST, follows:

ROBIN ROBERTS: Denver Broncos quarterback Tim Tebow had a super story to tell this NFL season. His electrifying, last-minute wins on the field made him popular, grabbing headlines all fall. Now he's speaking out about critics, his faith and dealing with all this fame. And Josh has so much more, rejoins us  there in Indy. Josh? 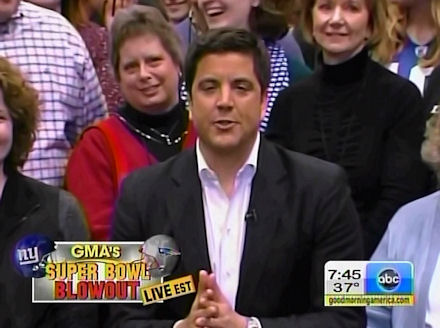 JOSH ELLIOTT: That's right, Robin. Tim Tebow, of course, one of the most decorated and celebrated college football players of all time. But, there were questions as to whether his game would translate to the professional level. Well, this year, with win after improbable win, he answered those questions, even as his celebrations raised others. He is the man behind the miracle season.

ANNOUNCER: They win it on the first play of overtime!

ELLIOTT: Denver Broncos quarterback Tim Tebow, hailed for a string of improbable wins and so beloved, his name and the signature celebration of prayer have become a verb. Tebowing. Transcending football. Done by crowds across the globe, even under the sea. But also drawing criticism from some corners. Some saying Tim Tebow has made his faith too visible. Something he's now addressing in an interview with Skip Bayless of our sister network, ESPN.

SATURDAY NIGHT LIVE, JESUS: I, Jesus Christ, am indeed the reason you won the past six football games.

BAYLESS: How much of a role does God play in winning or losing a football game?

TIM TEBOW: I mean, that's a good question. I think, for me, when I'm praying before games and during game, when I get on a knee in what's become Tebowing is, you know, I'm asking the Lord for strength whether I win or lose, hero or goat, I'm still going to be the same person. I'm going to treat others the way I want to be treated. I'm going do my best and I'm going to do what's right. Part of taking a knee is humbling yourself and putting the Lord first and that's why I do it.

BAYLESS: Your faith is the biggest reason you're such an astonishingly polarizing figure, a divisive figure in the country.

TEBOW: I'm sure my faith has- is a part of that. And I'm thankful for the support I've received. You're always going to have critics. I've always have them and I'll always have them for the future. And I'll use that as motivation. But more than anything, the support is what drives me the most.

ELLIOTT: Another motivation, one day making passes here in the biggest of games. But until then, he's left only to make predictions.

TEBOW: I think it will be a close game. But it's also hard to go against Tom Brady, as I found out. He's pretty good. And, um, you know, if I had to choose, I would probably go with the Patriots in a close one.

ELLIOTT: And, of course, you can see much more of Tim Tebow's with Skip, today, ten eastern this morning on ESPN 2's First Take. Robin?