ABC's GOP presidential debate on Saturday overflowed with liberal questions. Of the 48 queries by George Stephanopoulos, Diane Sawyer and others, 20 came from the left, three were from the right and 25 were neutral or horse race questions. A whopping 25 percent (12 questions) revolved around contraception-related subjects or gay rights. 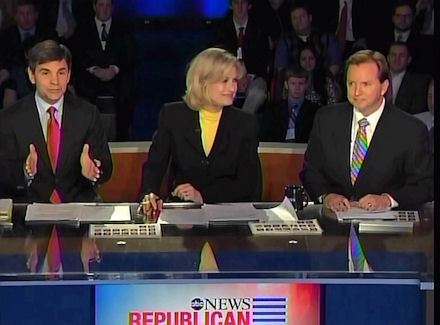 When the ABC journalists weren't grilling the Republicans on birth control, the subject was gay marriage and homosexual issues in general (five questions). Josh McElveen, of New Hampshire's WMUR spun the candidates as unfeeling for not supporting the rights of gays to adopt.

To Santorum, he chided, "Your position on same-sex adoption, obviously, you are in favor of traditional families, but are you going to tell someone they belong in -- as a ward of the state or in foster care, rather than have two parents who want them?"

Co-moderator Sawyer read a question e-mailed from "Phil in Virginia." She sympathetically quoted, "We simply want to have the right to...form loving, committed, long-term relationships." Sawyer added, "In human terms, what would you say to them?"

Only three questions came from the right. One of those was when McElveen hit Ron Paul for not being in sync with the party's stance of a strong national defense: "You have said that you wouldn’t have authorized the raid to get Osama bin Laden. You think that a nuclear Iran is really none of our business. How do you reconcile that, when part of your job as president would be" to defend America?

The bias grew so bad that Newt Gingrich, again, spoke out, slamming the moderators. In relation to the focus on gay rights, he ripped:

NEWT GINGRICH:  I just want to raise a point about the news media bias. You don’t hear the opposite question asked. Should the Catholic Church be forced to close its adoption services in Massachusetts because it won’t accept gay couples, which is exactly what the state has done? Should the Catholic Church be driven out of providing charitable services in the District of Columbia because it won’t give in to secular bigotry? Should the Catholic Church find itself discriminated against by the Obama administration on key delivery of services because of the bias and the bigotry of the administration? The bigotry question goes both ways. And there’s a lot more anti-Christian bigotry today than there is concerning the other side. And none of it gets covered by the news media.

Shouldn't the point of a Republican debate be to inform Republican voters who is the authentic conservative? All Stephanopoulos and Sawyer did was badger the candidates with liberal talking points.

Some of the questions from Saturday's debate: 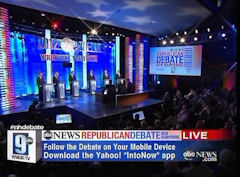 GEORGE STEPHANOPOULOS: Senator Santorum has been very clear in his belief that the Supreme Court was wrong when it decided that a right to privacy was embedded in the Constitution. And following from that, he believes that states have the right to ban contraception. Now I should add that he said he’s not recommending that states do that-

STEPHANOPOULOS: Governor Romney, do you believe that states have the right to ban contraception? Or is that trumped by a constitutional right to privacy?
...

STEPHANOPOULOS: [I'm] asking you, do you believe that states have that right or not?
...

STEPHANOPOULOS: Hold on a second. Governor, you went to Harvard Law School. You know very well this is based on-

STEPHANOPOULOS: Yes, they have. In 1965, Griswold v. Connecticut.

STEPHANOPOULOS: But you’ve got the Supreme Court decision finding a right to privacy in the Constitution.

...
STEPHANOPOULOS: I understand that. But you’ve given two answers to the question. Do you believe that the Supreme Court should overturn it or not?

DIANE SAWYER: I want to turn now, if I can, from the Constitutional and the elevated here, to something closer to home and to maybe families sitting in their living rooms all across this country.

Yahoo! sends us questions, as you know. We have them from real viewers. And I’d like to post one, because it is about gay marriage. But at the level -- and I would really love to be able to ask you what you would say personally, sitting in your living rooms, to the people who ask questions like this.

This is from Phil in Virginia. “Given that you oppose gay marriage, what do you want gay people to do who want to form loving, committed, long-term relationships? What is your solution?” And, Speaker Gingrich?

JOSH MCELVEEN: I’d like to go to Senator Santorum with a similar topic. We’re in a state where it is legal for same-sex couples to marry. Eighteen hundred, in fact, couples have married since it became law here in New Hampshire. The legislature passed it a couple of years ago. And they’re trying to start families, some of them. Your position on same-sex adoption, obviously, you are in favor of traditional families, but are you going to tell someone they belong in -- as a ward of the state or in foster care, rather than have two parents who want them?

MCELVEEN: Well, let me ask you to follow up on that, if you don’t mind, Senator. With those 1,800 -- if you -- we have a federal constitutional amendment banning same-sex marriage, what happens to the 1,800 families who have married here? Are their marriages basically illegitimate at this point?

SAWYER: If I could come back to the living room question again, Governor Romney, would you weigh in on the Yahoo question about what you would say sitting down in your living room to a gay couple who say, “We simply want to have the right to,” as the -- as the person who wrote the e-mail said -- “we want gay people to form loving, committed, long-term relationships.” In human terms, what would you say to them?