The network evening newscasts on Tuesday and the morning shows on Wednesday continued to hype the Herman Cain "firestorm," creating 12 more stories in less than 24 hours. Good Morning America's George Stephanopoulos led the show on Wednesday by trumpeting, " Republican front-runner Herman Cain changes his story again as one of his accusers now says she wants to go public on charges of sexual harassment."

On NBC's Today, Chuck Todd hyperbolically announced, "Struggling to move beyond the firestorm that is engulfing his candidacy, Herman Cain again denied he sexually harassed anyone." On that same program, guest Chris Matthews recklessly speculated that the Republican harassed women while drunk. 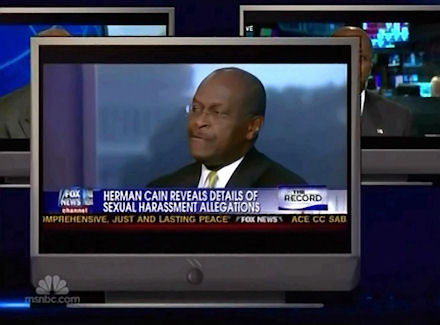 Lauer teased the show by wondering, "So, what's next for Herman Cain? What effect will this drip, drip, drip of information have on his campaign?

She spun his statements on Monday and Tuesday as "serial explanations" and promised, "For Cain, this problem just became a lot more complicated."

Over the last 24 hours, the three major networks have devoted 12 stories to the Cain controversy. World News and Evening News on Wednesday both had anchor briefs. Nightly News offered a full report. On Wednesday, Good Morning America included both a full report and an anchor brief.

Today had the most coverage: Two full reports and two briefs.

See a MRC Reality Check on how the networks ignored much more serious charges against Bill Clinton.

A transcript of the November 2 Today segment can be found below:

MATT LAUER: So, what's next for Herman Cain? What effect will this drip, drip, drip of information have on his campaign? 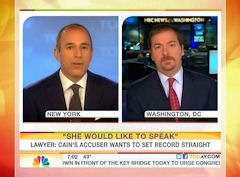 MATT LAUER: Let us begin, though, with this controversy swirling around GOP presidential candidate Herman Cain and word one woman who claims she was sexually harassed by him wants to speak out. Chuck Todd is NBC's chief white house correspondent. Chuck, good morning.

CHUCK TODD: Good morning, Matt. You know, today was supposed to be the culmination of Herman Cain's attempt to start rallying official Republicans in Washington. Instead he's now in a full fledged he said/she said as the lawyer for one of the accusers is making it clear to NBC News, she is upset and wants to respond to Mr. Cain publicly.

HERMAN CAIN: I absolutely agree we could have been better prepared and in the future we probably will be.

TODD: Struggling to move beyond the firestorm that is engulfing his candidacy, Herman Cain again denied he sexually harassed anyone. But, now, Joel Bennett the lawyer for one of the accusers says it was not one isolated incident.

JOEL BENNETT: There was more than one incident that my client perceived as sexual harassment.

TODD: He said she wants to tell her side of the story.

BENNETT: She would like to speak out for the record only because Mr. Cain has stated that he didn't sexually harass anyone, there wasn't any substance to the allegations and basically made it look like she was some type of frivolous claimant, just looking for money.

TODD: Bennett says his client hasn't gone public so far because of a confidentiality agreement that was signed 12 years ago as part of a financial settlement, but he says Cain's comments this week may have changed that.

BENNETT: But I do believe that his remarks are a violation of the confidentiality provision of the settlement agreement.

TODD: Specifically, Bennett says Cain violated a clause prohibiting any of the parties from making disparaging marks when he said this Monday:

CAIN: I do recall that her performance, it had been told to me by her boss, was not up to par.

BENNETT: I think she's upset about his statements and would like the record to be balanced and clear.

CAIN: I just started to remember more. Remember, you know, 12 years, a lot of stuff can go through your head.

TODD: By Tuesday night on Fox, he said he wanted his supporters to know he wasn't ducking the issue.

CAIN: So, no, I don't believe it's hurt my campaign at all, just based upon, not only the volunteers and the phone calls, but the fund-raising has just really gone up dramatically.

TODD: Cain's campaign said it raised nearly half a million dollars on Monday alone, the day the story broke. But, Tuesday, the group Americans for Herman Cain, a so-called super PAC not directly affiliated with the campaign, turned up the heat by invoking race and hearkening back to the Clarence Thomas hearing, sending out an e-mail an e-mail which read "Don't let the media lynch another black conservative." They are engaging in a high tech lynching by smearing his reputation and attacking his character." Asked on Fox whether race has played a factor in the story, Cain said yes.

CAIN: I believe the answer is yes but we do not have any evidence to support it.

TODD: And this morning, the New York Times is reporting the first woman to accuse Cain of inappropriate behavior during his tenure at the National Restaurant Association was paid a one year's severance package to leave $35,000. Now, another source told NBC News the figure might have been closer to $40,000. Matt?