According to MSNBC's Andrea Mitchell, Clarence Thomas' accuser, Anita Hill, is a "living legacy." The cable anchor on Wednesday fawned over the woman who, 20 years ago, charged the now-Supreme Court justice with sexual harassment. At no point did she offer a tough question or challenge the honesty of Hill.

Instead, Mitchell treated the Brandeis professor as a larger than life figure, wondering, "How is it to live with this, this history? You are now part of history. You have been for 20 years." 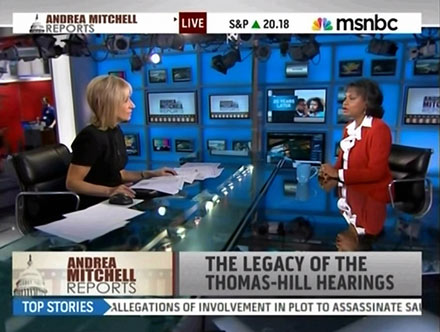 Mitchell reminisced about her own role in covering the 1991 confirmation hearings, remembering, "I was a correspondent sitting right behind you. It was three days of hell. It must have been excruciating for you to do through that, excruciating for everyone involved, on both sides."

Back on the October 15, 1991 Today, Mitchell groused, "...The Republicans did a great job of hammering [Hill]. It's basically what happened in the '88 campaign. The Republicans know how to fight dirty."

On Wednesday, Mitchell had zero skepticism for Hill, touting her talking points: "Now, you took a lie-detector test, a polygraph exam, privately administered from a former FBI official and that was not paid any attention to. There were other corroborating witnesses who were not permitted to testify."

Of course, what the host didn't point out is that the Democrats controlled the Senate in 1991. Mitchell might have speculated as to why the Democrats wouldn't permit these women to testify.

Also, an October 14, 1991 USA Today poll found that 47 percent of Americans believed Thomas. Only 24 percent found Hill to be telling the truth.

Mitchell added, "How did you feel at the time about the way the hearings treated you?"

Hill has written a book about the experience and also appeared on Tuesday's Good Morning America. There, co-host Robin Roberts speculated about the "legacy" of the "quiet" law professor.

A transcript of the October 12 segment, which aired at 1:30pm EDT, follows:

ANDREA MITCHELL: Anita Hill is a professor and senior adviser to the provost at the Heller School for Social Policy an Management at Brandeis University. And she's the author of the new book Reimagining Equality: Stories of Gender, Race and Finding Home. Very interesting subtitle. I want to get to that in a moment. Let's talk about what we just saw, because it brings me back. I was a correspondent sitting right behind you. It was three days of hell. It must have been excruciating for you to do through that, excruciating for everyone involved, on both sides. And unresolved in the end.

ANITA HILL: Well, I think there was a resolution in the end. Clarence Thomas was confirmed to the Supreme Court so there was a resolution of sorts but that did not resolve the issue of sexual harassment. In fact, what happened was that the pundits all said "Look what happened to Anita Hill? Women will never come forward having that in their mind of that experience and they were absolutely wrong. So in that case, in that situation or in that instance, no, there was not a resolution and even if people thought that women were not going to come forward they were proven absolutely wrong by women who came forward in record numbers after the hearing.

ANDREA MITCHELL: Now, you took a lie-detector test, a polygraph exam, privately administered from a former FBI official and that was not paid any attention to. There were other corroborating witnesses who were not permitted to testify. How did you feel at the time about the way the hearings treated you?

HILL: I believed they were trying to portray the situation as a he said-she said. Two individuals just having a disagreement when, in fact, there was, as you say, much evidence about Thomas' behavior. Three other women. One woman got out of the hospital in order to testify. They were not called to testify. There were other individuals who knew Thomas who were able to talk about his propensities to discuss pornography and those individuals were not called to testify. But in addition, it would have been helpful to have had an expert testify about sexual harassment to talk about sexual harassment, what it is to help the Senate and the public to really understand what the problem was. That was not available either.

MITCHELL: In your book, you talk about the genesis of the book and you write that you "began to feel more at home in America than I had since 1991 when the public rejected the testimony of my life experience." Talk about that about that and how this evolved into Reimagining Equality: Stories of Gender, Race and Finding Home."

HILL: I look at "Reimagining Equality," really, as a compilation of if things that I have learned through the experience of the hearing but my training before as a lawyer and as a law professor in researcher as well as the many years since then. And I look at it through the lens of the current crisis we have the foreclosure crisis and the millions of people who are insecure about whether or not they are going to be able to find a home in America.

MITCHELL: And do you think the economic crisis has exacerbated workplace tensions or are we at a stage where the relationships between men and women, or other sexual harassment issues, are really dealt with more seriously in the workplace?

HILL: Both of those things are true. Yes. The issue of sexual harassment is dealt with more seriously. I have heard from a number of woman who say after that testimony things changed in my work place overnight. But I also know the problem does still exist. So, in fact, yes, they do still exist and we have to be vigilant about enforcing the laws and women coming forward. But the other question, part of your question, part of your question, was about the economy. We know that the economy has had a disparate impact on women in particular women who are in- not high paying jobs.

HILL: More vulnerable women, single women in particular, with families, heads of households. The housing industry or housing collapse really has hit them hard, just as they were getting a foothold into real estate and property ownership.

MITCHELL: I want to ask you about Clarence Thomas, as we have seen over 20 years now, the fact that he acknowledged not disclosing his wife's earnings, some $200,000. He said he didn't understand the form or something. What do you think about the ethics issue? Some argued that the Supreme Court polices itself and he has been tone deaf to conflicts of interest involving his wife's activism. I don't know how you feel about that.

HILL: I don't want to comment on that, because that is not an issue I have looked at. But for me, my testimony at the hearing in 1991 was really about the integrity of the individual, Clarence Thomas as a nominee for the Supreme Court. My testimony, as you'll recall, I testified about behavior that took place while thomas was chair of the EEOC.

HILL: The Equal Employment Opportunity Commission. He was, as the chair, charged with enforcing enforcing sexual harassment laws and I believe what I said during those hearings really reflected on his integrity and his respect for the law and its application to everyone including himself.

MITCHELL: How is it to live with this, this history? You are now part of history. You have been for 20 years. Do you get past that, just personally?

HILL: On a day-to-day basis, I don't experience it sort of in visible ways as I have in the last few days. I turned on the TV the other day and there I was on History TV, a picture of me 35-year-old me 20 years ago. So that doesn't happen every day. But you know what I do get regularly that reminds me of how important that moment was for so many people what I get every day, not every day, probably once a week or routinely, are letters and e-mails from individuals saying, specifically, what the hearings meant to them. And that reminds me not only that it was important then, but that it is important now and that we must keep pushing forward on the issues until we really feel that we have eliminated sexual harassment in the workplace.