Over a span of just four days, the three major networks devoted 12 minutes and 59 seconds to highlighting the "campaign controversy" of Michele Bachmann's migraines. The report first appeared online and then was quickly picked up on ABC, NBC and CBS. On Wednesday, Good Morning America's Robin Roberts warned, " But now a new story is raising questions about her health."

On NBC's Today, Kelly O'Donnell insisted, "A report on Michele Bachmann's struggle with migraines is a political headache on the campaign trail." In total, the story of a relatively minor medical condition was featured  on GMA, Today, World News, Nightly News and CBS's Early Show. 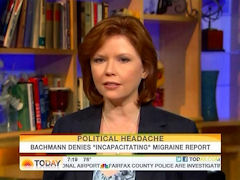 O'Donnell allowed, "Doctors say migraines are common and treatable with medication but can be brought on by stress."

On the July 20 World News, David Muir solemnly wondered, "And here's the question. Have they gotten in the way of her job before? Would they get in the way if elected president?"

In the same show, Jon Karl made sure label the Daily Caller, the source of the story: "The issue was first raised Monday be the conservative Daily Caller website, which quoted anonymous sources saying Bachmann frequently suffers from incapacitating headaches."

Both Today and Early show used the same description os the site as a "conservative" web page. "Liberal" is an ideological tag not as freely thrown around.

On the Early Show, Jan Crawford highlighted a possible double standard: "And some liberals said the entire report was sexist, because its tone implied that as a woman, Bachmann was weak and physically unfit for the job. As the only woman in the race, Bachmann has already gotten questions some say wouldn't be asked of a man."

(Joe Biden, it should be pointed out, has previously suffered from repeated brain aneurisms.)

A transcript of the July 20 Today show segment can be found below: 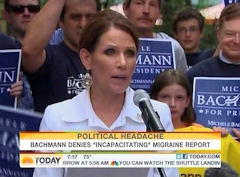 MATT LAUER: Congresswoman Michele Bachmann is surging in the early presidential polls, but today she's facing some questions about her health and how it might affect her campaign and possible presidency. Kelly O'Donnell is NBC's Capitol Hill correspondent. Kelly, good morning.

KELLY O'DONNELL: Good morning, Matt. Well you know, Michele Bachmann is somewhere between contender and front-runner and with that comes a lot of attention and some negative stories. Now what's interesting is Bachmann and her campaign have often avoided or refused to comment about some of that criticism. But when it came to her health, she responded quickly.

MICHELE BACHMANN: Don't give up!

O'DONNELL: This time the questions have nothing to do with her politics.

BACHMANN: I prescribe medication that I take on occasion whenever symptoms arise, and they keep my migraines under control.

O'DONNELL: A report on Michele Bachmann's struggle with migraines is a political headache on the campaign trail.

O'DONNELL: In South Carolina on Tuesday...

BACHMANN: This is a bold step.

O'DONNELL: ...Bachmann faced questions about that report, saying her migraines can be, quote, 'incapacitating.' A conservative website, The Daily Caller, based its story on accounts from anonymous former Bachmann aides.    Reporter Jonathan Strong:

JONATHAN STRONG: The headaches have resulted in her going to the hospital at least three times that we know of. And in one case, she missed congressional votes on the day that she was hospitalized.

O'DONNELL: Bachmann chose to take this head on, insisting migraines do not harm her candidacy.

BACHMANN: Since entering this campaign for the presidency, I have maintained a full schedule.

O'DONNELL: Strong said his unnamed sources have their own political agenda.

STRONG: These are Republicans who worry that Barack Obama could skate away with re-election if this blew up during the general election campaign.

O'DONNELL: Campaigning last summer, Bachmann's hometown paper reported that she cancelled an event and was hospitalized briefly with an undisclosed illness. Tuesday, Bachmann tried to offer an upbeat spin, making this about public education rather than damage control.

BACHMANN: The many questions I have received on this subject have allowed me to discuss this important condition that impacts many Americans and individuals in nearly one in four American households.

O'DONNELL: Doctors say migraines are common and treatable with medication but can be brought on by stress.

PERRY RICHARDSON [DOCTOR, GEORGE WASHINGTON UNIVERSITY HOSPITAL]: The body is telling you, you need sleep or needing to eat or needing to reduce the stress levels.

O'DONNELL: And that's where the politics comes in.

STUART ROTHENBERG: It goes to the heart of the question of her ability to serve. And her condition may not be a problem, or it may be a big problem. That's why she has to come clean.

O'DONNELL: And the health of candidates is often a subject in campaigns. I was in the room when medical records were shown to reporters for John McCain or John Kerry, but it usually doesn't happen this early. Bachmann and her campaign say that they may be pressured to provide more information, like what types of medication she takes, but they say it's not an issue now. Matt.