"60 percent Of Americans, according to the AP, now think the President is doing a good job," he added. But, the poll is really an outlier. Rasmussen has Obama at 48 percent. Gallup finds 52. However, Stephanopoulos ignored those numbers and focused on the AP data: "And for the first time in that poll, a majority of Americans, 53 percent, say he deserves re-election."

In a follow-up segment, Stephanopoulos reiterated, "And the White House did get that good news this morning, that 60 percent approval rating for the President in that latest poll." 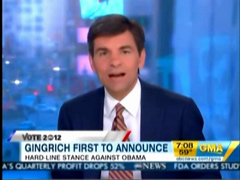 He did allow that the White House knows, with regard to 2012, "this is going to be a close race."

Unlike ABC, CBS didn't mention the AP poll. NBC only referenced it in a news brief in the 9am hour.

The former Democratic operative turned journalist has a habit of spinning polls on ABC. On August 02, 2010, he focused on low Republican favorability an in ABC News poll. Stephanopoulos skipped the same survey's finding that likely voters wanted the GOP to take control of Congress by a margin of 56 to 41.

A transcript of the first segment, which aired at 7:07am EDT on May 11, follows:

GEORGE STEPHANOPOULOS: Now, to politics. And a new poll out just this morning shows President Obama with his highest approval rating in two years. 60 percent Of Americans, according to the AP, now think the President is doing a good job. And for the first time in that poll, a majority of Americans, 53 percent, say he deserves re-election. This comes as one of the highest-profile Republicans is officially entering the race, former House Speaker Newt Gingrich. So, let's bring in Jon Karl on that. And, Jon, he's doing it in a brand new way.

JON KARL: Yeah, that's right, George. Newt Gingrich will make it official today. I am told he will announce he is running for president, via Twitter. George, we believe  this will be the first major presidential candidate ever to announce he is running via a tweet. He's been one of the most influential Americans for more than generation. Now, Newt Gingrich wants to be president.

NEWT GINGRICH [montage]: Courage to tell the truth. The Obama administration is wrong. We need to return power from Washington to the states.

KARL: In a way, the campaign is already there. Since leaving Congress more than a decade ago, Gingrich has built something of a conservative empire. A network of advocacy groups that has raised more than $32 million over the last two years. And he's taken a hard line against President Obama.

GINGRICH: We need a commander in chief with the courage to tell the truth not a spectator in chief, whose confused whether his job is kicking a soccer ball or leading the United States.

KARL: Newt's strategy will be to position himself as the conservative with experience, hearkening back to his role in the last Republican revolution.

GINGRICH: We're offering the boldest, most decisive, clearest contract in the history of the United States.

KARL: His Contract with America back in 1994, helped Republicans win control of the House for the first time in 40 years. As Speaker of the House, his battles with Bill Clinton led to two government shutdowns. Newt's biggest problem may be baggage. Political and personal. He's been through two divorces and had an odd explanation for his marital infidelity.

GINGRICH: There's no question that at times in my life, partially driven by how passionately I felt about this country, that I worked far too hard. And that things happened in my life that were not appropriate.

KARL: Newt's campaign begins with a sprint. He's already set up a campaign headquarters in Georgia. Hired a campaign manager. And set up speeches over the next week in Washington, Atlanta, Illinois, and Iowa, where he will have campaign events over four days.