Hardball's Chris Matthews on Thursday slammed Fox News as a "roach motel" for possible presidential candidates, knocking the chances of that network's analysts, Newt Gingrich and Sarah Palin. Yet, the MSNBC anchor, who obsesses daily about the so-called birther issue, admitted he hasn't been as tough on Donald Trump as he could. (Trump, of course, hosts The Apprentice on parent channel NBC.)

After Time magazine's Michael Scherer contrasted Palin and Gingrich with NBC's Trump, Matthews blurted, "Well, that's why I've sort of been nice to him, if he hasn't noticed that."

When Scherer relayed that the reality star has people telling him to stop talking about Barack Obama's birth certificate, Matthews further explained the connection to his network colleague: "...I'm one of those guys. I was on the phone with him a couple weeks ago: 'Stop it!' I can't tell him what to do."

According to the Hardball anchor, he "likes" Trump, attended one of his weddings and defended the businessman as "not crazy," in contrast to another surprise candidate, Ross Perot.

If Matthews really is as disgusted as he claims about the birth certificate issue, than he shouldn't let the business of being pro-NBC get in the way of his beliefs.

A partial transcript of the April 14 segment can be found below: 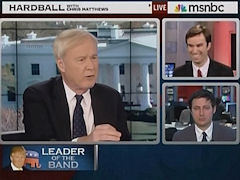 CHRIS MATTHEWS: I like Donald Trump, like most people. I went to his wedding, I think, he's as a person- I think this is a ludicrous thing he's doing. But, here he is. It's a free country. Here's trump telling Christian  Broadcasting Network's David Brody, his new friend, about his church-going habits, such as they are.
...

CHRIS MATTHEWS: By the way, working at Fox has turned out to be kind of the roach motel. I mean, anybody who's gone over there to work seems like they haven't been able to get the sticky stuff on the floor over there. They haven't been able to come back. I'm going through these people. Gingrich is not doing well. Palin seems to have vagued out into the sunset. The people that work over there don't seem to be doing too well as presidentials.

MICHAEL SCHERER (Time): And Trump's an NBC guy. So, we'll see about that.

MATTHEWS: Well, that's why I've sort of been nice to him, if he hasn't noticed that. Let me ask you this, do you think he will back track from the birther stuff once he's gotten himself- feet on the ground? And say I sent out some investigators- Some producers here think all he has to do is say, I sent some investigators out there, the guy's clean, let's move on.

MATTHEWS: Yeah, I'm one of those guys. I was on the phone with him a couple weeks ago: "Stop it!" I can't tell him what to do.