According to ABC's Christiane Amanpour, the assassination of President John F. Kennedy is "eerily relevant" to the attempted killing of Congresswoman Gabrielle Giffords less than two weeks ago. Talking to President Kennedy's sister on Thursday's Nightline, she wondered if the "political atmosphere" between the two acts of violence was the same.

Amanpour, the host of This Week, was highlighting the 50th anniversary of JFK's inaugural address and offered the standard liberal praise for Kennedy, asserting that his "face still has a powerful grip on the American psyche." Interviewing Jean Kennedy Smith, the journalist connected, "It's an episode eerily relevant today in the wake of the assassination attempt against Gabrielle Giffords less than two weeks ago."

Like many other journalists, Amanpour indicated that even if gunman Jared Loughner wasn't motivated by politics, a connection could still be made: "A congresswoman was targeted. No matter what the reason, how would you describe the atmosphere, the political atmosphere today in the country?"

Kennedy Smith refused the opportunity to offer political blame: "Well, I really think that was done by one individual...I don't think we should blame a whole group of people for it." (Nowhere in the segment did the reporter point out that President Kennedy was killed by a communist.)

Amanpour, who was a guest at Barack Obama's state dinner for China on Tuesday, spun the President as an heir to JFK's legacy. She speculated, "Do think that hope and idealism has been galvanized today by President Obama?"

Regarding the complete lack of Kennedys in elected office today, Amanpour opined, "For now, President Obama may very well be the closest thing the Kennedys have to one of their own in Washington."

January 20, 2011 was also the 30th anniversary of Ronald Reagan's first inaugural. That occasion was not highlighted by Amanpour or Nightline.

A transcript of the segment, which aired at 11:56pm EST on January 20, follows:

BILL WEIR: "We observed today not a victory of party, but a celebration of freedom." And so began the inaugural speech of John F. Kennedy, 50 years ago today. No one there could imagined what would happen to that man, his family and his country in the coming years, but the words he spoke will live forever. Jean Kennedy Smith is his only living sibling and tonight Christiane Amanpour gathers her memories in the Nightline interview. 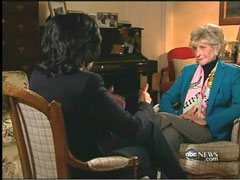 CHRISTIANE AMANPOUR: It was the clarion call for a new era. The youngest ever elected president and the first Catholic, a moment bursting at the seams bursting with hope. Kennedy's youngest sister, Jean Kennedy Smith, his only surviving sibling, remembers it well. What was it like, listening to that speech?

JEAN KENNEDY SMITH: Well, what we all remember is that very famous line about, "ask not what your country can do for you, ask what you can do for your country." And I think that that sort of sums up his philosophy. That was very strong sentiment that he believed deeply in.

AMANPOUR: [Pictures of JFK on screen.] 50 years later, that speech and that face still have a powerful grip over the American psyche. Renowned Kennedy historian Robert Dallek says it's not just because his life was cut so brutally short.

ROBERT DALLEK: In a recent Gallup poll, people asked to assess the last nine presidents. John F. Kennedy had 85 percent approval rating. The only one close to him was Ronald Reagan, with 74 percent. I think a lot of it has to do with the sense that he was so young, so attractive, so witty, so charming. And, of course, we have Kennedy on tape. We can evoke his memory.

JOHN F. KENNEDY: The torch has been passed to a new generation of Americans.

KENNEDY SMITH: This was a picture that he gave us after we- after the inauguration.

AMANPOUR: For Jean Kennedy Smith, that memory of her brother's call to service lives on. Your father was ambassador?

KENNEDY SMITH: That's true. And we are the first father-daughter ambassadors. My father was always a very powerful influence, well, always through my life. And he taught us very much that we were very lucky and that we should make a contribution to our country. We were very fortunate to live in America. And that was instilled in us in a very early age, all of us.

AMANPOUR: How was it instilled in you?

KENNEDY SMITH: Their whole life was their family. I mean, I don't ever remember a dinner party, a cocktail party in our house. Ever.

AMANPOUR: You mean, with outsiders?

KENNEDY SMITH: Yeah.  It was always the family.

AMANPOUR: A family bound tightly together be power and later, grief. John F. Kennedy was assassinated less than three years after his inauguration, in November 1963. His brother, Bobby, in 1968. Two acts of political violence so traumatic that the country has never fully recovered. It's an episode eerily relevant today in the wake of the assassination attempt against Gabrielle Giffords less than two weeks ago. A congresswoman was targeted. No matter what the reason, how would you describe the atmosphere, the political atmosphere today in the country?

KENNEDY SMITH: Well, I really think that was done by one individual. And I think that that could happen. It's happened, we all know, in the past. And I don't think we should blame a whole group of people for it. I think it probably- it calls our attention to our country and are we doing the best we can for everybody? And if we cross the aisles, as my brothers did, and try to see another person's point of view- I think it can be done.

AMANPOUR: You were talking about your brothers and they were partisan. How did they deal with that in their political lives?

KENNEDY SMITH: I think they honestly felt that people march to their own drummer and that they have a point of view and their point of view should be respected. Teddy, of course, is well known for crossing the aisle and working out things. I think coming from a big family helps you to keep your sense of humor about certain things.

AMANPOUR: And politics is still very much the family business. Case in point, Ted and Caroline Kennedy's influential endorsements of then-candidate Barack Obama in 2008.

JONATHAN ALTER: Caroline Kennedy and Ted Kennedy not only endorsed Barack Obama but say explicitly that he was the heir to John F. Kennedy.

AMANPOUR: Jonathan Alter is the author of The Promise about Obama's rise to power and his first year in office.

ALTER: And that was not something that any of them had said about any politician in the intervening 50 years. He would not have beaten Hillary Clinton in the Democratic primaries on Super Tuesday without the help of the Kennedy family.

AMANPOUR: Tell me about why the family put their support behind Senator Obama.

AMANPOUR: Do think that hope and idealism has been galvanized today by President Obama?

KENNEDY SMITH: I think he's trying to galvanize it and he has in some areas. He's doing what he feels is the right thing and I think we should support him.

AMANPOUR: For now, President Obama may very well be the closest thing the Kennedys have to one of their own in Washington. For the first time in 63 years, there is no Kennedy serving in national office. But it may not stay that way for long. Today there are no Kennedys in office.

AMANPOUR: For the first time in decades. How do you feel about that?

KENNEDY-SMITH: I don't even think about it, because I know one is going to crop up.

AMANPOUR: You know one is going to crop up?

KENNEDY SMITH: And I'll have to give another fund-raiser.

WEIR: Our thanks to Christiane Amanpour for that report.