Of the three morning shows, only ABC's Good Morning America on Wednesday singled out New Jersey governor Chris Christie, chiding the "rising star of the Republican Party" for being out of the state when a blizzard hit. At the same time, reporter Sharyn Alfonsi praised Newark's Democratic Mayor Cory Booker for helping with the clean-up. She enthused, "Wow! A mayor with a shovel."

Regarding Christie, Alfonsi critiqued, "Meantime, anger also boiled over into New Jersey, where Chris Christie, the state's brash and often outspoken governor,...was nowhere to be found." To underline the segment's sarcasm, Alfonsi played a clip of the governor asserting, "Accountability is important now more now than ever."

For good measure, she added, "Christie, a rising star of the Republican Party, was at Disney World." In contrast, Alfonsi highlighted Booker, alerting, "In fact, about the only politician to weather the blizzard may be Newark Mayor Cory Booker, who spent the day responding to tweets from stranded residents, Personally helping shovel sidewalks and dig out cars."

Both CBS's Early Show and NBC's Today covered the anger in the New York/New Jersey region over the blizzard and the problems with the recovery. Neither of them, however, mentioned Christie.

It also should be pointed out that, generally, mayors, and not governors, have more operational responsibilities when it comes to snow storms. The move to blame Christie has been pushed heavily on liberal and Democratic blogs.

A transcript of the GMA segment, which aired at 7:05am EST, follows:

ROBIN ROBERTS: And as you were saying earlier, Chris, too, the politics of snow getting pretty heated here in New York. Much of the city still waiting for the plows to clear snow-clogged streets. Sharyn Alfonsi is right outside and has more on this. Good morning, Sharyn. 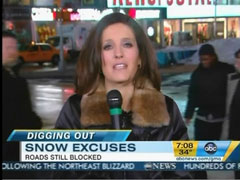 SHARYN ALFONSI: Good morning, Robin. Well, what a mess. The fire department here in New York says they haven't dealt with this many 911 calls since 9/11. Everybody is stuck. There are roads that are still not plowed. Others look pretty good. But, there's also buses stuck. Ambulances stuck. Cars stuck. The mayor is now urging patience. But, New Yorkers are not known for their patience and they want heads to roll. If only hot tempers could melt snow.

MARTY MARKOWITZ (Brooklyn Borough President): This was a royal screw-up, to use the current terms.

ALFONSI: Up and down the east coast, but especially in New York City, people furious their streets are snowed over, and they are snowed in. And now, they are looking for someone to blame.

UNIDENTIFIED MAN: We need an answer. Where the hell are the plows? We have been forgotten.

ALFONSI: City leaders say this was a perfect storm at an imperfect time, a holiday weekend. Private tow truck and plow operators are on vacation. So, there aren't enough trucks to clear roads.

MAYOR MICHAEL BLOOMBERG (New York City): We cannot do everything all the time. And we are doing the best we can. I think this city has pulled together. I don't think that we should sit around and think that the end of the world is here.

SECOND UNIDENTIFIED MAN: Mayor, wear my shoes. Wear my shoes to try to walk down here, do my job.

ALFONSI: Some are questioning if Manhattan, the city's wealthier borough is getting special treatment, a point made by the New York Times blog. Pointed to in this treatment, and this one in Brooklyn. Something echoed loudly by the borough's president live on WABC late Tuesday.

MARKOWITZ: Move it out of Manhattan into Brooklyn! Every available vehicle you've got, to clean this place up!

CHRIS CHRISTIE: Accountability is important now more now than ever.

ALFONSI: -was nowhere to be found. Christie, a rising star of the Republican Party, was at Disney World.

ALFONSI: In fact, about the only politician to weather the blizzard may be Newark Mayor Cory Booker, who spent the day responding to tweets from stranded residents, Personally helping shovel sidewalks and dig out cars. Wow. A mayor with a shovel. How many times have you ever seen that before? Back here in New York, our mayor says, listen. He hopes that most streets will be plowed within 24 hours. But he refuses to promise, saying, he doesn't want to anger more residents. Robin? Chris?