Sloppy ABC Misleads on Estate Tax Being 'Slashed'; It Will Actually Increase 35 Points

In reality, the so-called death tax is currently at zero. Under the deal, it will increase to 35 percent. Karl mangled, "Even Democratic leaders are fuming, especially unhappy with the provision that slashes the tax on inheritances."

On the CBS Early Show, news anchor Jeff Glor spun, "One of [the Democrats'] major objections, that proposal to lower estate taxes." Again, an increase from zero to 35 percent is not "lowering." (If no action had been taken the rate would have returned to 55 percent for individuals worth more than $1 million.) This may be slowing the rate of increase and increasing the exemption rate, but it's hardly "slashing."

In an earlier piece, reporter Nancy Cordes was more specific, but still managed to confuse, proclaiming that Harry Reid and "others think the estate tax compromise is too generous to the very wealthy, dropping the tax on inheritance from 55 to 35 percent." At no time did anyone on CBS or any of the networks explain the current rate is zero.

Over on NBC's Today, reporter Kelly O'Donnell was vague, but still careless with her wording: "But [Democrats are] fighting with the White House over giving high earners a break on income and estate taxes."

An example of the impact of the estate tax: Yankees owner George Steinbrenner died in July of 2010. His family paid no federal estate tax. Had he died in 2011, the legislation now before Congress would result in his heirs owing 35 percent, hundreds of millions of dollars.

Now, is that "slashing" a tax?

A transcript of the Jon Karl segment, which aired at 7:02am EST on December 9, follows:

GEORGE STEPHANOPOULOS: But, we begin with the Democratic revolt against the President's proposed deal on tax cuts. Jonathan Karl starts us off at the Capitol this morning, Jon? 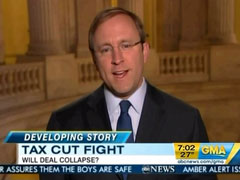 JON KARL: Well, George, the Vice President sure did get an earful last night. But, the White House is making a big push to rescue the deal that the President struck with Republicans. Warning, that if it doesn't pass, we could see another recession. The White House dispatched Joe Biden to Capitol Hill with a tough sales mission last night. Convincing unhappy House Democrats to support the deal. But, even as Biden spoke, one Democratic congresswoman tweeted, "Listening to the VP Making the case for the House tax cut deal. I'm still opposed." Even Democratic leaders are fuming, especially unhappy with the provision that slashes the tax on inheritances.

REP. CHRIS VAN HOLLEN (D-MD): The super, super break on the estate tax is a choking point for a lot our members.

KARL: The President has been working the phones, too. Telling Democrats the deal is necessary to give the economy a boost.

BARACK OBAMA: Get this done. The American people are watching. And they're expecting action on our parts.

KARL: And the President has an unlikely ally on that, Senate Republican leader Mitch McConnell.

MITCH MCCONNELL (R-Kentucky): We've reached a bipartisan agreement. It's time Democrats in Congress reach a similar conclusion and enable us to act for the good of the whole country.

KARL: But McConnell may have some work of his own. Not all Republicans like the deal. Oklahoma's Tom Coburn blasted it for including more deficit spending.

TOM COBURN (R-OK): We just want to take our shot of morphine and go on down the road. Have another martini on the deck of the Titanic.

KARL: And Erskine Bowles, the chairman of the President's deficit commission, said he was, quote, "deeply disappointed, with the plan because it failed to deal with the debt." The Vice President spent almost two hours talking to House Democrats last night. I am told that about 20 of them rose to speak. Almost all of them against the deal. Some of the most pointed comments came from Congressman Anthony Weiner, who said the President just has to show stronger leadership in taking on the Republicans. George?