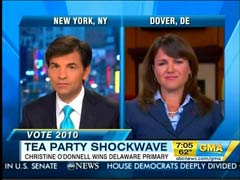 Stephanopoulos also played up charges by Delaware's Republican Party Chairman Tom Ross that O'Donnell is a "liar" and "mentally unhinged." The ABC host wondered if her primary victory could "help the Democrats."

Stephanopoulos noted only negative news for the surprise winner of the Delaware senatorial primary, asserting that "...The national Republican Party is not going to give you any funds." (This later turned out not to be true.)

During Wednesday's interview, Stephanopoulos never mentioned Castle. Instead, he parroted, "We saw that the Republican Party chairman in Jon Karl's piece there, he went on to say, that you're 'not a viable candidate.'"

Piling on, the host continued, "...You 'cannot be elected dog catcher in Delaware.' [Ross] went on to say that you're either a liar or mentally unhinged." Stephanopoulos then played a clip of Rove, on Fox News, slamming O'Donnell.

A transcript of the September 15 segment, which aired at 7:04am EDT, follows:

STEPHANOPOULOS: Another Sarah Palin mamma grizzly wins, this time in Delaware. But, could this victory help the Democrats?

STEPHANOPOULOS: And the big winner joins us now. Christine O'Donnell from Delaware. Good morning. Thank you for getting up so early. And congratulations. Did Sarah Palin make the difference here?

CHRISTINE O'DONNELL: Thank you, George. Yes, she did. All summer we've been working very hard to get out there. Give the voters an opportunity to meet me, to know me. So that I've been asking them that when you vote for me, I want you- I want the vote to mean something. I want it to be a vote of confidence. So, when the mud-slinging started, I was very encouraged that what a lot of people said was, "We knew what your opponent was putting out wasn't reflective of who we know you to be." And when Governor Palin stood up and so boldly made a statement that she supported me, it allowed them to get past the politics of personal destruction, to look at the message and look at the fact that I wanted to make this race about the issue. How we're going to get jobs back in Delaware. How we're going to defend the homeland of our security. And she helped to get it back on track.

STEPHANOPOULOS: You're going to need all the help she can give right now. She's going to need to raise some money for you. 'Cause we just heard Jon. Karl say the national Republican Party is not going to give you any funds.

O'DONNELL: Well, that's a shame. But they never thought I could win this race. And I believe that we can win without them. This is about giving the political power back to we, the people. And we proved the so-called experts wrong. So, I think a few of them, perhaps, may have their pride hurt this morning. But, you know, I didn't count on the establishment to win the primary. I'm not counting of them to win the general. I'm counting on the voters of Delaware. And we're going to work hard to make sure that we take our message to them.

STEPHANOPOULOS: But- But you are going to have to answer some questions. We saw that the Republican Party chairman in Jon Karl's piece there, he went on to say, that you're "not a viable candidate." That you "cannot be elected dog catcher in Delaware." He went on to say that you're either a liar or mentally unhinged. And Karl Rove, President Bush's former political adviser, was on Fox News, very tough, talking about your checkered background.

STEPHANOPOULOS: Saying you say some nutty things. And, listen, he went on to say, you have to answer these questions.

KARL ROVE: Why did she mislead voters about her college education? How come it took her nearly two decades to pay her college bills so she could get college degree? How did she make a living? Why did she sue a well-known and well-thought-of conservative think tank?

STEPHANOPOULOS: Can you answer those questions?

O'DONNELL: Yeah. Everything he's saying is unfactual [sic]. And it's a shame. Because he's the same, so called political guru that predicted that I wasn't going to win. And we won. And we won big. So, I think, again, he's eating some humble pie and he's just trying to restore his reputation. But, again, I'm counting on the voters in Delaware. Like I said this, is about giving the political process back to the people. People are tired of what's going on in Washington. These failed policies that don't represent them. My Republican opponent did not have a record to stand on. He supported the Democrats more than he supported the Republicans. And when we started gaining momentum and we started gaining credibility in this race, it made the Republican establishment look like lazy people who did not care about their principles. But I hope that we can put that behind us because if they're really serious about winning, I was ahead in the general election, according to Rasmussen, before this Republican cannibalism started. So, if they were serious about winning, we could repair the damage done and move forward. And that's the challenge I put out to them. But, if not, I truly believe we can win.

O'DONNELL: That is not true.

O'DONNELL: That's simply not true. We addressed all this stuff. Absolutely. Absolutely. And first of all, they also said that Ronald Reagan wasn't electable. We've addressed all of this stuff on our website. It took me 12 years to pay off my college loans. I'm not a trust fund baby. Most Delawareans can relate to having to work hard to pay for their own college education. I was never dishonest about that. They made up an accusation about an IRS tax lien. The IRS said, "Oops, it was a mistake." They cleared it up right away. We presented my opponent and the republican administration, showing them that the IRS had admitted to a computer error. They chose to ignore the truth because they don't have a record to stand on. And it's humiliating when the party gets behind this guy who they say is the only one who can win. But doesn't stand for anything that the Republican Party stands for. So, they have to cling to these baseless accusations. And it's a shame because I want to go into this general election telling the Delaware voters the proposals that I want to introduce in Washington to get jobs back into Delaware, to get our economy back on track. To take care of our veterans. And as we move forward, I hope that my Democratic opponent learns the same lesson that my Republican opponent learned. That dirty politics will backfire. In a state like Delaware, where it's small enough to get to know all of the voters, that's exactly what we intend to do this next month and a half. It didn't work for Castle. It won't work for the Democrats.

STEPHANOPOULOS: And we will be watching. Congratulations again. Thanks for your time this morning.