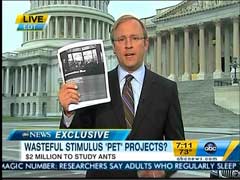 Good Morning America's Jon Karl on Tuesday highlighted a new report by two Republican senators on extreme examples of waste in the stimulus bill. Karl rattled off some eye catching data: "$71,000 for researchers at Wake Forest University to see how monkeys react under the influence of cocaine."

The ABC journalist informed viewers that Senators John McCain and Tom Coburn released their new report "exclusively to Good Morning America." Now that the information is public, will CBS and NBC follow up on the story?

Karl shined a spotlight on other examples of stimulus waste, such as "nearly $1 million for the California Academy of Sciences to study exotic ants."

The network correspondent balanced his piece with White House criticism of the report: "There are errors in the report. It cites nearly $300,000 to study the use of yoga to reduce hot flashes for women in menopause. In fact, the program studies symptom management for cancer survivors."

Earlier: On July 16, CNSNews.com reported on more government funding of cocaine use to animals. This time, $181,000 to investigate how the drug enhances the sex drive of Japanese quail.

A transcript of the segment, which aired at 7:11am EDT on August 3, follows:

GEORGE STEPHANOPOULOS: And, meanwhile, though, George, the President's stimulus bill is under fire yet again. This time, in a new report by two Republican senators, released exclusively to Good Morning America. The report takes dead-aim at the bill, blasting it as wasteful and largely unsuccessful in creating jobs. Jonathan Karl has the latest for us. All the details from Washington. Good morning, Jon..

JON KARL: Good morning, Robin. Well, the report by Senators Tom Coburn and John McCain lists 100 separate stimulus projects that these senators say are wasting taxpayer money. The Forest Service is spending more than $500,000 to replace the windows at this Mt. St. Helens visitors center. It could sure use a facelift, but-

KARL: The visitors center is closed and there's no plans to reopen it. The Forest Service told us, they are fixing it up to sell it. It's one of the projects highlighted in the McCain-Coburn Report, that they said adds up to $1.7 billion in stimulus waste.

JOHN MCCAIN: I think none of them really have any meaningful impact on creating jobs and, of course, some are more egregious than others.

KARL: Among the highlights, nearly $1 million for the California Academy of Sciences to study exotic ants. The academy says the money created four research jobs. $71,000 for researchers at Wake Forest University, to see how monkeys react under the influence of cocaine. Important research, the school says. And the biggest ticket item on the report goes to a joint venture of none other than BP. $308 million for a clean energy hydrogen power plant to be built in California. BP may not be popular, but the Energy Department say this is a cutting-edge project to create 1,600 jobs and the private sector is putting in seven times as much time as the government. The White House dismisses the report, arguing it focuses on a relative handful of projects and misses the overall impact of the stimulus.

JARED BERNSTEIN (Chief Economic Advisor for VP Biden): Unfortunately, Senators Coburn and McCain have a bad track record on this type of report.

KARL: There are errors in the report. It cites nearly $300,000 to study the use of yoga to reduce hot flashes for women in menopause. In fact, the program studies symptom management for cancer survivors. The White House says if you add up all 100 of these projects, the total funding represents less than one quarter of one percent of the stimulus. Just a tiny fraction, Robin, of the overall projects.

ROBERTS: Yeah, but still raising a lot of eyebrows. Before you go, Jon, I want to ask and get your thoughts about another high-profile democrat facing charges in the House. What's the latest with Maxine Waters?

KARL: Well, the Ethics Committee has decided to go forward with conflict of interest charges against Maxine Waters. This is from a meeting she set up that her husband has a bank an investment in. And she is insisting, Robin, that she is absolutely innocent, that she did nothing wrong. This is going towards a public trial, right in the middle of the campaign.