ABC's weekend coverage of a tough immigration bill in Arizona focused mostly on the anger and outrage against it, minimizing supporters of the legislation. Talking to Sheriff Joe Arpaio, a fierce critic of illegals, Good Morning America co-host Bill Weir on Sunday berated, "But with this new law, will you ramp it up?...Will you grab people on street corners? I mean, what will you do with this new law?" [Audio available here.]

He also challenged Arpaio about his own fight against illegal immigration and derided, "...How is it possible to enforce these sorts of laws without sweeping up innocent citizens in the process?"

On Saturday's GMA, reporter Mike Von Fremd filed a report on the law, which instructs the police to stop anyone suspected of being illegal. The segment featured Eleanor Pelta of the American Immigration Lawyers Association, President Obama and a Hispanic man from Arizona. All opposed the legislation. Only Governor Jan Brewer was highlighted in defense of the bill.

Von Fremd also described it as a "sweeping anti-immigration" law, rather than anti-illegal immigration.

A segment by correspondent Clayton Sandell on Saturday's World News followed a similar pattern. He observed that the Bishop of Los Angeles assailed the legislation as "Nazism." Conservative senatorial candidate J.D. Hayworth appeared briefly in a clip, but the show mostly focused on liberal complaints, such as those of Obama and of Phoenix's Democratic Mayor Phil Gordon.

On Saturday's GMA, Weir talked to Gordon and wondered if the Mayor would even enforce the law: "But, if this is still hung up in a lawsuit in some form in August, what will you tell your police chief who is essentially under orders to enforce this?"

In fairness, he did twice press Gordon on what his "fix" for the problem was. Weir also pointed out, "And the supporters of this, they'll point to the fact that a rancher was murdered near the border by a suspected smuggler just last month. And there some 460,000 illegal immigrants in your state."

Clearly, however, ABC's initial coverage of the bill has been slanted towards those who angrily oppose the legislation, allowing those who support it to be portrayed as fringe.

A transcript of Weir's interview with Sheriff Joe Arpaio on the April 25 GMA, which aired at 8:34am EDT, follows: 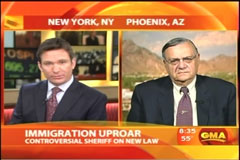 BILL WEIR: Now, to the battle over the toughest illegal immigration law in the land. Last night saw another vigil to protest this new law in Arizona which gives police power to stop anyone suspicious, demand proof of citizenship. There were protests Friday. More expected today. But, one man who is solidly behind this sort of enforcement and used it to reach international renowned as America's toughest sheriff. Maricopa County's Joe Arpaio. He joins us from Phoenix. Sheriff, thanks for being with us. Good morning.

WEIR: Good morning. The mayor of Phoenix was our guest here yesterday. And he says this law is going to drive a dangerous wedge between police and the lawful Hispanic citizens of your county. Here's what he had to say.

PHOENIX MAYOR PHIL GORDON: It's just hateful and spiteful and is going to make the state and city much less safe than safe.

JOE ARPAIO: Well, you know, he's been after me for three years. We've been enforcing the illegal immigration law with illegal immigration law. 38,000, we investigated and detained. No problems, except with the Justice Department. The mayor went to the Justice Department two years ago. They've launched an investigation against me and my officers about a year and a half ago. Nothing has happened on this alleged racial profile. So, they can talk and do everything they want. We're enforcing the laws, and I'm very comfortable with it.

WEIR: But, as you know, there have been several lawsuits, one in particular, Julio Mora, a U.S. citizen, and his father, a 30-year legal resident. They claim your deputies stopped them for no good reason, held them handcuffed for three hours. The merits of this particular case aside, how is it possible to enforce these sorts of laws without sweeping up innocent citizens in the process?

ARPAIO: I'm not going to comment on that law. It's a frivolous lawsuit. We'll see what happens. Our people are well trained. We act on reasonable suspicion. We act on probable cause and I'm very, very comfortable on how we operate and how law enforcement will operate under this new law.

WEIR: When we followed you over the years, you seemed to defend the actions of your officers, only pulling over speeders or those who violate traffic laws. You do have a lot of traffic stops. But with this new law, will you ramp it up? Will you- will you grab people on street corners? I mean, what will you do with this new law?

ARPAIO: Well, you know, we don't go on street corners and round up people and we won't do it under this new law, unless we have probable cause. We will continue our operations, nothing will change, we have been enforcing two other new state laws and federal laws. We're well trained. The Homeland Security trained 100 of my deputies. Of course, because of political reasons they took the authority away. But it doesn't matter. We've been training our deputies to enforce all of the federal and state illegal immigration laws.