Arizona officially joined the South this month. In other words, it became for our Northeastern media elitists a state dominated by backward, slack-jawed racists. The Associated Press marked the passage of a tough new anti-immigration law with the leftist version of a Welcome Wagon: “The furor over Arizona's new law cracking down on illegal immigrants grew Monday as opponents used refried beans to smear swastikas on the state Capitol.”

Disagreeing with the left – and more importantly, handing them a political defeat – brings a lot of ugliness these days from the forces of “tolerance.” Character assassination is required. A citizen of Arizona cannot be concerned about higher rates of crime and strained government budgets without being Mexican-food-smeared as an adorer of Adolf Hitler.

But what’s truly outrageous if not surprising is that the same media that visibly quivered with anger that anyone would draw a Hitler moustache on their hero Barack Obama now present these Nazi smears as not an embarrassment to the left, but as a way of augmenting the left. The “furor was growing” over the tough new law, they dutifully report.

On Saturday's Good Morning America, reporter Mike Von Fremd downplayed the violence of protesters against Arizona's new immigration law. He spun, "Riot police were called in to try and control demonstrators protesting outside the capital. Most were peaceful. A handful threw bottles at police and were arrested." Yet, ABC derided March's Tea Party rallies as "very ugly," despite the fact that there were no arrests.

In contrast, on March 20, World News host David Muir scolded, "Protesters against the [health care] plan gathered on the streets of the capital where late today we learned words shouted turned very ugly, reports of racial and homophobic slurs, one protester actually spitting on a Congressman." Continuing to fret over those opposed the bill, he complained, "Late word from Washington tonight about just how ugly the crowds gathered outside the Longworth office building have become."

ABC's weekend coverage of a tough immigration bill in Arizona focused mostly on the anger and outrage against it, minimizing supporters of the legislation. Talking to Sheriff Joe Arpaio, a fierce critic of illegals, Good Morning America co-host Bill Weir on Sunday berated, "But with this new law, will you ramp it up?...Will you grab people on street corners? I mean, what will you do with this new law?" [Audio available here.]

He also challenged Arpaio about his own fight against illegal immigration and derided, "...How is it possible to enforce these sorts of laws without sweeping up innocent citizens in the process?" 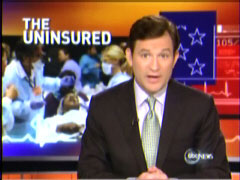 On Saturday, ABC’s World News Saturday and the NBC Nightly News each ran a story touting the high number of patients arriving at a free clinic in Los Angeles, operated by Remote Area Medical, as evidence of the need for health care reform. For the NBC Nightly News, it was the third such story on the facility of the week.

While ABC’s World News with Charles Gibson had run one story on Friday that focused on the generous work of the organization and its founder, Stan Brock, Saturday was the first time World News had touted the clinic as evidence of the need for reform, or compared America’s poor to the Third World, as stories on the CBS Evening News and the NBC Nightly News had already done previously. And on Saturday, ABC and NBC again failed to inform viewers that patients who arrived at the free clinic were not required to prove financial need to receive service, but were merely accepted on a first-come, first-serve basis.

In Inglewood, California, tonight, a vivid demonstration of the health care crisis: A clinic that provides free health care has been inundated with patients. Almost 46 million people in this country do not have health insurance, but the problem is a lot bigger than that. Many people who do have insurance still cannot afford the care that they need. 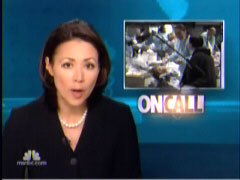 All three broadcast networks this week have reported on the charity Remote Area Medical's offer of free medical care at a temporary facility in Los Angeles, citing the arrival of many patients as a sign of how many Americans there are who need "free health care," and even relaying the words of program volunteers who compared the health care challenges of some Americans to problems in Third World countries like Guatemala and India.

But only by watching ABC's Good Morning America did one see a soundbite of program founder Stan Brock informing viewers that the free clinic does not even screen patients to learn if they really are in need financially. Brock:

It's first-come, first-served basis, no questions asked, no financial information required. There are a lot of good programs in this country, but they tend to have hurdles that the patient has to leap through in order to get the care.

Reporters seemed shocked that thousands of people would stand in line for hours to receive hundreds -- or even thousands -- of dollars worth of free medical care.

When a horrible tragedy happens, media reports try to find a place to point the finger. Although, this time a company name is being tacked on to something they had nothing to do with.

Heparin is a generic drug made by many different companies that is used to thin blood. It has recently been involved in two accidents involving babies and media reports have unfairly connecting one company to both incidents.

Actor Dennis Quaid and his wife Kimberly are suing Baxter Healthcare Corp. They claimed the heparin blue labels could be confused with a less potent derivative, which reportedly led to the injury of their newborn children, according to Bloomberg.

On July 6, 17 babies in a hospital in Corpus Christi, Texas, were given an overdose of the drug, resulting in the death of a set of twins. Although their deaths are still being investigated.

Media reports of the incident at Christus Spohn Hospital South in Texas have been tied in with Quaid's lawsuit against Baxter over heparin even though the two cases are unrelated and Baxter has confirmed it did not manufacture the heparin used in the Texas accident.