ABC Leaves Ideology Out of Investigation Into 9/11 Truthers: 'They Come From All Over the Political Spectrum' 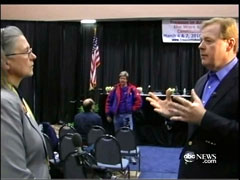 Nightline's Chris Bury on Monday investigated the so-called 9/11 Truth movement, but made no effort to look at the ideological make up of those who believe that the government was behind the 2001 terror attacks. Reporting from the group's convention, he asserted, "Over the weekend hundreds of Americans calling themselves 9/11 Truthers gathered at Valley Forge, Pennsylvania. They come from all over the political spectrum."

However, according to a 2007 poll by Rasmussen, 35 percent of Democrats believed that President Bush knew about the terrorist attacks of September 11, 2001 in advance. Yet, Bury blandly explained, "They are an eclectic group with widely different agenda, including war protestors, first responders who feel neglected and families of some 9/11 victims."

Bury did highlight one attendee, Sander Hicks, noting, that he "want[s] treason charges brought against members of the Bush administration." However, there is no mention of the Rasmussen poll about Democrats. Now, Truthers don't reside only on the left, but why ignore the fact that many do?

On the February 02, 2010 edition of MSNBC News Live, host David Shuster asserted that "Most Republicans are birthers," referring to the conspiracy theory that Barack Obama wasn't born in America.

To his credit, Bury did at least explain, "Former Obama environmental czar Van Jones forced out after signing an online petition for 9/11 truth that he later repudiated."

In an interesting exchange, the reporter noted that a former Time magazine Person of the Year appeared at the 9/11 Truth convention: "Others such as former FBI whistleblower Coleen Rowley, one of Time's 2002 Persons of the Year, are convinced that the government is still covering up what it knows."

She repeatedly refused to say whether the U.S. government murdered its own citizens on September 11. (Time Magazine sure knows how to pick their Person of the Year.)

A partial transcript of the March 9 segment follows:

CYNTHIA MCFADDEN: The three Pentagon police officers who killed gunman John Patrick Bedell during his attack on the Pentagon last week spoke publicly today for the first time. One officer described Bedell's demeanor as, quote, "one you know from combat." But why did Bedell do it? Before the shooting, authorities say he had posted anti-government rants online, including his belief that 9/11 was a vast government conspiracy. As Chris Bury now reports, he is hardly the only person to feel that way.

UNIDENTIFIED MAN #1: Our government is absolutely complicit in a grand cover-up.

UNIDENTIFIED MAN #2: The United States orchestrated, facilitated the death of my son.

UNIDENTIFIED MAN #3: It's extremely important that we know the whole truth about 9/11.

CHRIS BURY: Over the weekend hundreds of Americans calling themselves 9/11 truthers gathered at Valley Forge, Pennsylvania. They come from all over the political spectrum. What they share is a deep and unbending distrust of the official explanation. Many believe the 9/11 attacks were an inside job.

BURY: The driving force here, a housewife from suburban Philadelphia who plunked down $20,000 of her own money to stage the convention. A lot of people are going to look at this and wonder are you part of kind of a lunatic fringe.

METZ: There is a lunatic fringe, absolutely. But, we're trying to keep the crazies out of here, because we're just average Americans. I'm just a housewife and mom that wants the truth.

BURY: Such doubts have spawned an entire cottage industry of 9/11 conspiracy. The movement is knitted together on the internet, a viral community of true believers. It's gospel, the film Loose Change is the most downloaded videos in Google history. Its young producers, stars in this convention, disavow any connection to violent extremists such as John Patrick Bedell, killed in that Pentagon shootout last week.

DYLAN AVERY (DIRECTOR): We know that the news said that he might have been a truther, but that's it. That's all we know. I don't support violence. It's that simple.

KOREY ROWE (PRODUCER): They're trying to already equate us with this man and trying to say that the 9/11 truth movement is a militia, gun toting, you know, anti-government conspiracy. It couldn't be any farther from the truth.

[Loose Change clip]: And we are told that these massive structures were destroyed by 10,000 gallons of jet fuel.

BURY: They are an eclectic group with widely different agenda, including war protestors, first responders who feel neglected and families of some 9/11 victims. Some of the truthers including Sander Hicks want treason charges brought against members of the Bush administration. What do you do in your day job?

SANDER HICKS: I play music in the church.

BURY: Do you consider yourself a conspiracy theorist?

HICKS: That is a loaded question, Chris, because the word conspiracy theorist tends to mean discredited whacko. I consider myself a scientist and a historian. I would not base any of this 9/11-

BURY: A scientist and a historian? I thought you were a musician?

HICKS: I am an author and researcher. I rely on science and history in my work on 9/11.

COLLEEN: ROWLEY (Ex-FBI): Well, you know, of course, anytime you get a group together, I don't care what group it is-

BURY: So do you believe it or not?

ROWLEY: Do I believe what?

BURY: Yeah. Do you believe that the American government helped kill innocent Americans?

ROWLEY: Well, when you - again, let me - you're kind of trying to almost put me on an interrogation.

ROWLEY: You know what you me of is when I was an FBI agent.

ROWLEY: No, what I believe is that the full truth, and actually the 9/11 commissioners now say this too, is not known. Absolutely.