ABC's Robin Roberts Tosses Softballs to Michelle Obama: 'How Do you Feel' When Sarah Palin Makes 'Light' of Barack? 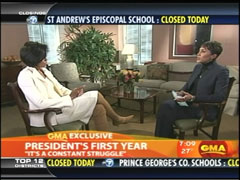 Good Morning America co-host Robin Roberts tossed softballs to Michelle Obama in an interview on Tuesday, asking the First Lady to explain how she "feels" when people like Sarah Palin make "light" of her husband's efforts to "make a better world."

After referencing Palin's speech to the tea party convention on Saturday, Roberts played a clip of the former Alaska governor mocking, “How's that hope-y, change-y stuff working out for you?”  The GMA co-host offered this aggrieved question: "How do you feel when people are making light of something that was very important to the campaign and had every intent, and still do, to bring hope and change and make it a better world for people?"

A sympathetic Roberts then allowed the First Lady another chance to attack those who would criticize her husband. She empathized, "But, does it sting? Does it sting when you hear those things?"  The journalist then simply sat quietly as Mrs. Obama proceeded to blame the Republicans for incivility in Washington.

The President's wife lectured, "You keep your hand held out. You keep that smile on your face. You stay open to the possibility of partnership and one day there will be another hand out there to accept yours. That is the beauty of Barack Obama. His hand stays out, positive and focused. It’s a gift."

This isn't the first time Roberts has gushed over Michelle Obama. On March 13, 2009, she searched for answers to these fascinating questions: "'What does she [the first lady] do for relaxation in the evening, away from the public?' and also '...How can she stay so positive about the economy?'"

On May 19, 2008, in a joint interview with Barack and Michelle Obama, she offered the couple a question that featured the same deferential tone displayed on Tuesday. Roberts wondered about Republican negative campaigning: "Should you get through this process and you have the general election ahead of you, that this is what you can expect more and more of. Are you prepared for that?"

A transcript of the February 9 segment, which aired at 7:07am EST, follows:

ROBIN ROBERTS: Not easy to get to Washington, but I did for our exclusive interview with First Lady Michelle Obama. Later today, she'll unveil her biggest program yet, a nationwide campaign to combat childhood obesity called Let's Move. $10 billion will be spent over 10 years, with the goal of ending childhood obesity in a generation. And, yes, it was a very snowy White House for our conversation.

ROBERTS: Kids love them. Parents are like, "Oh."  So, what are you doing?

OBAMA: They had friends over the other day. And right now, they're working on Valentine's Day cards and a little homework.

ROBERTS: Are you anxious as most parents? Because it kind of effects your day.

OBAMA: Well, I have a little more help. [Laughs.] My mom is still here. So, it doesn't, really completely stop things. That's the beauty of living in the White House. You got a lot of people who help out.

ROBERTS: Now Michelle Obama's days are focused on helping to combat childhood obesity, launching a national campaign to get kids healthy. Tell us about this latest initiative concerning that.

OBAMA: The overall goal, Robin, is very ambitious. We want to eliminate this problem of childhood obesity in a generation. One in three kids are overweight or obese and we're spending $150 billion a year treating obesity-related illnesses. So, we know this is a problem and there's a lot at stake. So, we know that we need to do something big and get moving on it. So, we're launching a nationwide campaign called Let's Move, because we need to get this done. My kids have to get up and move. They can't sit in front of the TV. I have my girls involved in sports because I want them, as young women, to understand what it feels like to compete and to win and to run and to sweat. That's all- this is about all of that as well.

ROBERTS: It's very ambitious and this is something I know that you are intent in seeing through. There are some people that say, "I don't want you, I don't want anyone telling me what I should or should not eat."

ROBERTS: And they feel it is personal responsibility and the government should not have a role. How do you respond to that?

OBAMA: I completely agree. There is no expert on this planet who says the government telling people what to do actually does any good with this issue. So, I completely agree. This is going to require an effort on everyone's part. So, we have to tailor, have a tailored approach to this. We want to get parents information so they can make good decisions. We want to improve the quality of food in our schools and make food more affordable and accessible because we have food deserts for more 3.5 million Americans, folks who don't live anywhere near a supermarket so they can't get access to good, fresh produce.

ROBERTS: A focus on simple, important changes. Capping off a whirlwind first year in the White House. Now, you’re starting the second year. Now, instead of everybody looking back at the first year, you're looking ahead to the second year. But in looking back, this weekend Sarah Palin at the tea party convention-

SARAH PALIN: How's that  hope-y change-y stuff working out for ya?

ROBERTS: There are a lot of people that feel that way, that a year ago, they were full of hope. How do you feel when people are making light of something that was very important to the campaign and had every intent, and still do, to bring hope and change and make it a better world for people?

OBAMA: Oh, this has been a tough year for this country. You know, my husband entered office when this country was on the brink of a depression and fortunately because of some really smart decisions and quick decisions, we're not there yet. We're not even looking down that path. But still, people are struggling and rightfully so, people are frustrated, right? But, one of the things that Barack Obama said and continues to say is, "change ain't easy."  And it doesn't happen overnight. And it certainly doesn't happen in a year. And hope, with that, comes faith. And consistency and persistence, perseverance, all of that tough stuff. And we have that in this country. I think my husband has done a phenomenal job staying on course, looking his critics in the eye, coming up with clear solutions and, again, staying the course. But people have a right to criticize the President of the United States.

ROBERTS: But, does it sting? Does it sting when you hear those things?

OBAMA: You know, what stings is continued high unemployment rates. What stings is knowing that American families are struggling. What stings is to know that we still don't have quality health reform bill. What stings is we need our kids educated and healthy. Those are the stings, right? But you- you keep moving to solve them. And every day our President wakes up serious and focused and committed to pushing this stuff through. I am proud of my husband. And I think he's had a phenomenal first year. I think we have lots of work to do in this nation. We do.

ROBERTS: The peaks and valleys of this year, there were successes and some shortcomings and the rhetoric the last few months, is there ever a time you look to your husband and say, "We got to fix this?"

OBAMA: Well, you know, it's a constant struggle. You know, the coarsening of Washington and politics has always been here. We had hoped that more progress would have been made. But, as I say, you just keep holding the hand out, you know? You never give up on the possibility of more civility. You never walk away from that, right? You keep your hand held out. You keep that smile on your face. You stay open to the possibility of partnership and one day there will be another hand out there to accept yours. That is the beauty of Barack Obama. His hand stays out, positive and focused. It’s a gift.