ABC’s Good Morning America on Tuesday devoted two stories to whether the "controversial" Rush Limbaugh would be able to buy an NFL team, but skipped any discussion of the false quotes that have been circulating about the radio host. Co-host Robin Roberts buried that lede and instead fretted, "Opponents say Limbaugh has a history of making racially offensive comments, some directed squarely at NFL players."

As reported previously on NewsBusters, several media outlets have repeated fake Limbaugh quotes about how "slavery had it merits." GMA hosts and reporters didn’t appear to be interested in correcting the slanderous charges. Roberts even compared Limbaugh to a baseball owner who made favorable remarks about Hitler. [audio available here]

Bizarrely, correspondent David Muir played a quip of the conservative defending himself, but didn’t explain the context: "They have to go somewhere to find concocted quotes, which are now bordering on slander, libel, whatever it is, that I never said." What were the concocted quotes? Muir didn’t mention the false slavery quote.

He simply moved on and asserted, "But more than a half-dozen NFL players point to actual quotes." As evidence, he cited New York Giants player Mathias Kiwanuka who told the New York Daily News he wouldn’t play for Limbaugh. Kiwanuka is also one of the players spreading misinformation about the host:

All I know is from the last comment I heard, he said in (President) Obama's America, white kids are getting beat up on the bus while black kids are chanting 'right on,'" Kiwanuka told The Daily News.

As the MRC’s Matthew Balan explained, Limbaugh was actually making a satirical point about Newsweek, Obama and the tendency for journalists to repeatedly play the race card when it comes to the President.

In a second segment, Roberts interviewed Mike Greenberg and Mike Golic, hosts of the radio show Mike and Mike in the morning. The ABC journalist compared Limbaugh to Marge Schott, the late owner of the Cincinnati Reds, who also made sympathetic remarks about Adolf Hitler. (She once asserted that he was "good at the beginning," but went "too far.")

Drawing a parallel, Roberts mused, "But, guys, you remember in the 1990s, Marge Schott was banned From baseball for two years for what some considered racial comments. And she was an owner at the time. Could the NFL do something similar?" MSNBC's Tamron Hall on Monday’s News Live made the same comparison.

Continuing her attack, Roberts read a quote from the head of the NFL players union about how sports should oppose "discrimination and hatred." She queried, "If the bid goes through. If he does becomes a part-owner, what kind of message do you believe this sends?"

The priorities of Good Morning America’s journalists seem upside down. If someone is having false, slanderous quotes attributed to him or her, shouldn’t that be the lede of any story on the topic?

A transcript of the October 13 segment, which aired at 7:15am EDT, follows: 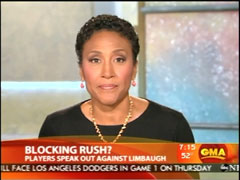 ROBIN ROBERTS: And we’re going to move on now to Rush Limbaugh’s controversial bid to buy the St. Louis Rams of the NFL. Opponents say Limbaugh has a history of making racially offensive comments, some directed squarely at NFL players. Here's David Muir.

DAVID MUIR: On his radio show, Rush Limbaugh fought back against the growing controversy, surrounding his bid to become part owner of the St. Louis Rams, saying he couldn’t talk about his football bid directly. He did offer his own criticism of the media.

RUSH LIMBAUGH: They have to go somewhere to find concocted quotes, which are now bordering on slander, libel, whatever it is, that I never said. And they believe it.

MUIR: But more than a half-dozen NFL players point to actual quotes. To Limbaugh's short-lived run as an ESPN sports analyst. There was this about quarterback Donovan McNabb.

LIMBAUGH: I don't think he's been that good from the get-go. I think what we have here is a little social concern in the NFL. I think the media has been very desirous that a black quarterback do well.

MUIR: Limbaugh said at the time, people were making a mountain out of a molehill. Six years later, Donovan McNabb has not forgotten.

DONOVAN MCNABB: If he’s rewarded to buy that, congratulations to him. I won’t be in St. Louis no time soon.

MUIR: And among the players now arguing against Limbaugh's bid, New York Giants defensive end, Mathias Kiwanuka, who said, "He can do whatever he wants. It's a free country. But if it goes through, I can tell you where I'm not going to play."

MUIR: But those critical comments are drawing fire as well.

STEPHEN A. SMITH: Those black ballplayers that are saying that, I'm here on national television, telling you, they're lying through their stinking teeth. Please. The New York Jets offer me $10 million, but Rush Limbaugh offers me $20 million, I'm going to have a problem with it? Please, they’re lying.

AL SHARPTON: Rush Rush out of the NFL.

MUIR: The Reverend Al Sharpton is now asking the NFL to block Limbaugh's bid. But even some of Sharpton's own listeners are asking why? Some said it’s good for business.

UNIDENTIFIED MALE CALLER: Him owning a team would be good for the sport. And I say that because somebody to hate puts people in the seats.

MUIR: The NFL doesn't talk publicly about the sale of teams until the league’s owners decide. Football fans on both sides already have. For Good Morning America," David Muir, ABC News, New York.

ROBERTS: For more on the controversy, moments ago, I spoke with Mike Greenberg and Mike Golic of ESPN's Mike and Mike in the Morning. What are your listeners saying this morning, Greeny?

MIKE GREENBERG: It's amazing, Robin. The reaction is overwhelming. And it just goes to show that Rush Limbaugh is one of the most polarizes figures in American society. And I would say it is somewhere in the vicinity of 50/50 split. With half of our listeners that are calling us and e-mailing and saying, guys, give Rush Limbaugh a break. A lot of the things being said about him are inaccurate. And then others saying, if Rush Limbaugh owns the St. Louis Rams, I would never buy tickets to another pro football game again. So, I think it's an indication of just how polarizing a figure he is.

ROBERTS: And, Golie, so, you don't believe some of the players who are saying "Hey, I will not- if I'm a free agent, I will not play for the Rams if Rush Limbaugh's a part-owner?

MIKE GOLIC: Listen, Robin, there are some superstars in this league. Most are foot soldiers. I was a foot soldier. If I was in the situation, you know, what am I going to do? I'm not going to play for you? Oh, yeah. Nobody else wants me in the league. So, listen, it's a job to some people. Certainly, Rush, as Greeny said, is polarizing. And everybody knows his business. But, I guarantee you, and I don't know if what this says about players in the league, there's a lot of players in the league, who probably don't even know Rush Limbaugh. And that's the absolute truth. Or they don't care what he does. He's the owner of their team. But they're getting their paycheck for their job.

ROBERTS: But, guys, you remember in the 1990s, Marge Schott was banned From baseball for two years for what some considered racial comments. And she was an owner at the time. Could the NFL do something similar?

GREENBERG: I would be absolutely stunned if he winds up a member in this group. Because, the National Football League is one of the very few businesses in America that does not need to subscribe to the any publicity is good publicity theorem. They are a machine. They are so overwhelmingly popular. They are, by far, the most popular and important sport and business in American sports right now. They don’t need the additional attention. Rush Limbaugh comes with huge numbers of fans. But, I don't think the NFL is sitting, thinking, if we could get the Rush Limbaugh audience to pay attention to the National Football League- I don't see that there’s a whole lot of upside for them. It's obvious, what some of the downside could be.

ROBERTS: Golie, of course, you played in the NFL for many seasons. And I want to tell you what the directive director of the players association said. "Sport in America is at its best, when it unifies, gives us all of a reason to cheer, and when it transcends. Our sport does exactly that when it overcomes division and rejects discrimination and hatred." If the bid goes through. If he does becomes a part-owner, what kind of message do you believe this sends?