MSNBC on Monday featured the Nation magazine’s sports editor to rant against Rush Limbaugh as a "unreconstructed racist," a "swine" and also lobby that the conservative host shouldn’t be allowed to purchase the St. Louis Rams football team. Morning Meeting guest host Contessa Brewer completely ignored the left-wing affiliation of Dave Zirin and identified him only as "sports writer." [Audio available here.]


Raging against the idea that the Limbaugh might soon own a football team, Zirin asserted that the issue is "about having somebody in an NFL owners box who [players] know views them with naked and open contempt because of the color of their skin." He fumed that the radio star is someone who "has made hundreds of millions now on the issues of hatred and division."

Zirin even used a dubious, disputed quote that he assigned to Limbaugh: "[Players] don't want an owner who has said slavery was a good thing because it made the streets safer." A Google News search finds this supposed comment attributed to the host: "I mean, let's face it, we didn't have slavery in this country for over 100 years because it was a bad thing. Quite the opposite: Slavery built the South. I’m not saying we should bring it back; I’m just saying it had its merits. For one thing, the streets were safer after dark."

The "quote" can be found in liberal Jack Huberman’s 2006 book "101 People Who Are Really Screwing Up America." However, according to Google Books, there is no date given. Is MSNBC a reputable news outlet? Or do they just allow guest to make wild accusations and require no proof? (Another absurd "quote" in the book has Limbaugh asking for the medal of honor to be given to the assassin of Martin Luther King.)

Host Brewer simply played along, wondering, "Is there anything the NFL commissioner, or anybody else for that matter, can do to stop it?" She later queried, "Do you think that if the NFL leadership doesn't stop this in its tracks that you're going to see players walking off the field in protest?"

Continuing to smear Limbaugh, Zirin claimed that NFL players "don't to see a swine owning a ram." He closed the interview by deriding the radio host as someone who has "open, publicly-stated contempt for people with dark skin."

On August 18, 2009, Zirin appeared on MSNBC. He trashed Palin, but at least was identified as a writer for the Nation.

At the very least, MSNBC and Contessa Brewer should have informed viewers that this "sports writer" was, in fact, a hard-left ideologue. Then those in the audience might be more skeptical when such a guest offers dubious quotes.

A transcript of the Morning Meeting segment, which aired at 10:09am EDT on October 12, follows: 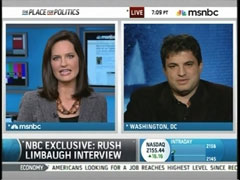 CONTESSA BREWER: The NFL Players Union is trying to derail Rush Limbaugh's bid to buy the St. Louis Rams. In an e-mail to the players, the union chief writes, "Sport in America is at its best when it unifies, gives all of us reason to cheer, and when it transcends. Our sport does exactly that when it overcomes division and rejects discrimination and hatred." And new this morning, the Reverend Al Sharpton is lending his voice asking to meet with NFL Commissioner roger Goodell. Sharpton writes, "Rush Limbaugh has been divisive and anti-NFL on several occasions with comments about NFL players, including Michael Vick and Donovan McNabb and his recent statement that the NFL was beginning to look like a fight between the Crips and the Bloods, without the weapons, was disturbing." Sharpton probably won't like some of the comments Limbaugh made to NBC’s Jamie Gangel in her exclusive one-on-one with the conservative radio king. It aired this morning on Today.

JAMIE GANGEL: Beyond politics, were you moved in any way to see an African-American elected president?

RUSH LIMBAUGH: Yeah. But, I got over it very quickly. I mean, he is President of the United States. His skin color doesn't matter to me. His policies are what matters. The idea we had a very historic thing was wonderful when it happened, absolutely. But I'll be honest with you, I predicted it was going to exacerbate racial problems and it has. Any criticism of President Obama is going to be said to be on the other hand in racism and if you don't like his health care bill, it's racist. And I opposed when Clinton and Hillary were trying to do it and they aren’t black. It's all about ideas. I think these are dark days for the country. I think his economic policies are- I think he is shepherding the decline. He is not observing it.

GANGEL: Is there anything good he's done?

LIMBAUGH: Maybe. I can't think of it. But let's see.

GANGEL: Anything good you would say about him?

BREWER: Limbaugh talks about the NFL, in the part two of Jamie Gangel’s exclusive. We are joined by sports writer Dave Zirin. Dave, good to see you.

DAVE ZIRIN (Sports writer): Hey, great to be here, Contessa. I gotta tell you, it’s Zirin [stressing pronunciation], though. Just so you know.

BREWER: Okay, Zirin. Well, thanks for the correction there. I appreciate that. We're talking about Rush Limbaugh. What’s really the sticking point for the guys in the NFL who don't want him to have any stake in team ownership?

ZIRIN: Well, it's simple. The NFL is 70 percent African American. They've attempted to make real steps in recent years with hiring more African-American coaches and front office personnel. And Rush Limbaugh is an unreconstructed racist. They don't want an owner who has said slavery was a good thing because it made the streets safer. They don't want an owner who has said that the NAACP should practice looting and rioting. And it's not about criticism of Barack Obama. It's about having somebody in an NFL owners box who they know views them with naked and open contempt because of the color of their skin.

BREWER: My- my reading of this is he is part of an investors group here. Is there anything the NFL commissioner, or anybody else for that matter, can do to stop it?

ZIRIN: Absolutely. The NFL owners reject ownership groups all the time and they normally they do it because of concerns about character. It's a private ownership group and the character of Rush Limbaugh- this is somebody who has made hundreds of millions now on the issues of hatred and division- and NFL owners have already talked anonymously about concerns about, let's say, his extracurricular pharmaceutical habits- and they've said that, not me, about a reason why he shouldn't be owner. But, I’ll tell you what, what it comes down to, more than anything else, is more and more people in the players union and in NFL locker rooms are saying- they've said it to me- that they don't to see a swine owning a ram.

BREWER: Yeah. Well, let's see, he has said certainly derogatory things about Donovan McNabb, among other specific players. What is your prediction at this point? Do you think that if the NFL leadership doesn't stop this in its tracks that you're going to see players walking off the field in protest?

ZIRIN: I think you could. You've already had bart Scott who is a Pro bowler, Donovan McNabb, who is a Pro-Bowler, Mathias Kiwanuka, who is a terrific player on the Giants, have all said- they said, "Look, my character means more than to me than my paycheck. There is no way I would play for this person." It’s not about him being a conservative. Most NFL owners are conservative. It's a question about his open, publicly-stated contempt for people with dark skin. That's what it comes down to and NFL owners should not have him as part of their exclusive fraternity.

BREWER: Dave Zirin. Thank you so much for your time. I appreciate that.