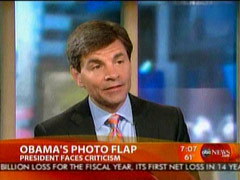 "Good Morning America" co-host Diane Sawyer worried on Thursday that Barack Obama backtracked "on his pledge to release pictures of U.S. soldiers allegedly torturing terror suspects," fretting that this might be a "cave-in to Dick Cheney and the political right."

Later in the show, former Democratic aide-turned journalist George Stephanopoulos appeared on the program to put the best possible spin on the Obama administration's decision to appeal a court decision ordering pictures of alleged abuse released. Talking to co-host Robin Roberts, he offered talking points that could have come straight from White House Chief of Staff Rahm Emanuel.

Stephanopoulos generously theorized, "So, by appealing this case right now, even if the White House doesn't win down the line, they bought themselves some time. And the President has shown he's on the side of the troops." At no point did Sawyer, who teased the segment, Roberts or Stephanopoulos talk about the pressure the political left put on Obama to release the photos. Speaking of Dick Cheney, the "This Week" anchor did allow that the former Vice President's opposition against releasing the pictures "is starting to get some traction."

Prior to the Stephanopoulos piece, reporter Jake Tapper did manage to highlight the fury on the left, mentioning "disappointed liberal activists." He also featured a quote from ACLU lawyer Amrit Singh, who complained, "It [refusal to release the photos] only confirms that the Obama administration's promise of transparency and accountability is essentially meaningless."

A transcript of the May 14 Stephanopoulos segment, which aired at 7:07am EDT, follows:

DIANE SAWYER: Presidential reversal. President Obama backtracks on his pledge to release pictures of U.S. soldiers allegedly torturing terror suspects. Did he cave-in to Dick Cheney and the political right?

ROBIN ROBERTS: We're going to get the bottom line now. We're joined by chief Washington correspondent and host of "This Week," George Stephanopoulos. Good to see you, George, this morning.

ROBERTS: Let's pick up on what Jake was saying. Because, just over a week ago, they had agreed to release the photos. And now, the administration is saying no. What more is behind the reversal?

STEPHANOPOULOS: Well, those commanders on the ground. Commanders Petraeus, McKiernan, Odierno in Iraq. All coming in and saying, if you were to do this, you are going to hurt our troops. And it's a perilous time. We're at this period now where we trying to move troops out of the cities in Iraq. The violence has gone up. We're about to face a new offensive in Afghanistan right now. Elections in Afghanistan, as well. A very dangerous time. So, by appealing this case right now, even if the White House doesn't win down the line, they bought themselves some time. And the President has shown he's on the side of the troops.

ROBERTS: Now, the timing of this, some folks are saying that he's given in a bit to former vice president Dick Cheney, who has been very vocal about the administration, not making us as safe as the previous administration. Let's take a look a bit at what Cheney said.

DICK CHENEY: Bottom line is, we successfully defended the nation for seven and a half years, against a follow-up attack to 9/11. That was a remarkable achievement. Nobody would have thought that was possible. But it was. I believe it was possible because of the policies we had in place, which they're now dismantling.

STEPHANOPOULOS: He is everywhere. There's no question about that. And Dick Cheney isn't the most popular messenger. But his argument is starting to get some traction. And you're seeing the President move more toward siding with the military on this thicket of issues. I would expect, for example, today, very likely today, the President will approve reinstituting the military commissions to try detainees coming out of Guantanamo and other prisons. That is something he criticized during the campaign. Now, it looks like he's instituting it.

ROBERTS: Of course, the President has a great deal on his plate, including Justice Souter, his retirement. And wanting to have somebody in place by the time the Senate goes on recess in August. Any short list any more names that you're hearing, George?

STEPHANOPOULOS: What we're getting now is the President would like to lay out the nominee probably in the week between Memorial Day and the first week of June, when he goes off to Europe. They're vetting a handful of candidate. Although, the White House is taking great glee, saying not all of the candidates are out there. It still looks like the top three candidates are Elaine Kagan, the solicitor general, Sonia Sotomayor, who is a federal appeals court judge in New York, Puerto Rican background, Diane Wood, another appeals court judge out of Chicago. Some of the new names being talked about right now. California Supreme Court Justice Carlos Moreno. A woman named Teresa Roseborough out of Met Life. She used to clerk for Justice Stevens. And the Homeland Security secretary Janet Napolitano. But, as I said, the White House is taking great glee in saying there's some secrets out there none of you know about.