Contessa Brewer: Will Liberal Meghan McCain Be the 'Voice' of the GOP?

"MSNBC News Live" host Contessa Brewer on Monday speculated as to whether the liberal-leaning Meghan McCain could become "the voice of the Republican Party." Brewer, who was talking to Washington Times reporter Christina Bellantoni about the daughter of the 2008 GOP presidential nominee, ignored the fact that Ms. McCain has admitted she supported Democrats John Kerry in 2004 and Al Gore in 2000. [audio available here]

Instead, referencing the 24-year-old blogger's speech to the Log Cabin Republicans on Saturday, Brewer queried, "...Is it time for the Republican Party to be more inclusive of people from all different orientations?" She then asked Bellantoni, "...We talk about Limbaugh, Michael Steele, Sarah Palin, is it possible Meghan McCain becomes the voice of the Republican Party?" How bizarre is it that Brewer was asking if a woman who supported Gore and Kerry, and spoke to an organization of gay Republicans that refused to endorse George W. Bush in 2004, will one day lead the GOP? (In her latest Daily Beast blog, McCain attacked the "creepy" Karl Rove.)

At one point, Brewer theorized, "When Meghan McCain...says this is the party of old ideas and these guys are scared out of their wits about what the future of the Republican Party holds, does that resonate within the conservative crowd?" At the very least, Brewer should have acknowledged the liberal voting record of Ms. McCain and provided some skepticism about this young woman's potential as a leader of the GOP.

A transcript of the April 20 segment, which aired at 10:17am, follows: 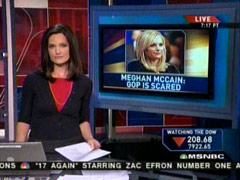 CONTESSA BREWER: You know, Meghan McCain says the party her father led through last year's election is divided between the past and the future. Now, she insists she is still a proud member of the GOP. But, Meghan says it's members can no longer be the parties of old ideals.

MEGHAN MCCAIN (Speech to Log Cabin Republicans): Most of our nation wants our nation to succeed. Number two, most people are ready to move on to the future, not live in the past. And number three, most of the old school Republicans are scared [bleep] of that future.

BREWER: Christina Bellantoni is a White House correspondent for the Washington Times. When Meghan McCain, who is in her early twenties and has made a lot of news for some of the non-political cat fights, recently, that she's been in, um, when she says this is the party of old ideas and these guys are scared out of their wits about what the future of the Republican Party holds, does that resonate within the conservative crowd?

CHRISTINA BELLANTONI (Washington Times): Well, whether or not it resonates within conservatives is to be determined yet, but I think this is more of a generational thing. I mean, she's using young words, words like old school. Words like we've got to be the cool party again. And you've heard, even Michael Steele use those same words, the chairman of the Republican Party. So, I think that they recognize, in addition to the fact that the Republican Party is in danger of becoming a regional party, they did not attract young people in the last election. Guess who did? President Barack Obama.

BREWER: All right. Let me play something else that she said in the process of giving this speech.

MCCAIN: I believe government should always be efficient and accountable. I have lots and lots of gay friends and, yes, I am a Republican.

BREWER: We know that there are Log Cabin Republicans, but is it time for the Republican Party to be more inclusive of people from all different orientations?

BELLANTONI: Well, I think that is where a lot of Republicans are moving towards. They've always claimed that they are a big tent party. You know, Log Cabin Republicans have always had a place, but I think some of them felt a little marginalized. This is why you're hearing Meghan McCain give this talk. This is why Steve Schmidt said last week, "We cannot be in danger of becoming a party just revolving around social issues. So, I think that they kind of learned this message from Barack Obama's campaign that led him to become president. And they're trying to reach out to more people. They're trying to decide, really, what kind of a party they are going to be. And I think we have some time before they need to figure it out. But, you're going to hear all these players start to determine which direction the party is heading.

BREWER: Hey, Christina, we talk about Limbaugh, Michael Steele, Sarah Palin, is it possible Meghan McCain becomes the voice of the Republican Party?

BELLANTONI: Uh, well, that would certainly help her book sales. She does have a book coming up. So, that is not an accident, either, that you're hearing more from her.

BELLANTONI: Because, the more people know her and don't think of her, as, you know, her 72-year-old father's daughter, that think of her as a young, fresh face with Republican ideas, that will help her.