Andrea Mitchell: Dumb Americans Might Not Get 'Sophisticated' Cartoon

On Monday's "MSNBC News Live," journalist Andrea Mitchell and Washington Post editorial writer Jonathan Capehart discussed whether Americans are not "sophisticated" enough to understand the attempted satire in the cartoon featured on the cover of the current New Yorker magazine. According to Mitchell, "...The only question there is whether [the cover] is too sophisticated to actually be perceived the way it is intended."

The image in question features Barack Obama in Muslim clothing with a flag burning in the background and is an obvious parody and an example of the liberal contention that conservatives are questioning the patriotism of the Democratic presidential contender. The Post's Capehart suggested that the uneducated voters in Middle America might not comprehend the high minded satire: "...The folks at the New Yorker are very smart, very learned, learned people, but once you get outside of the confines of Manhattan and the Upper West Side, you sort of begin to wonder if anyone-- if there was a conversation around the table about how will this be viewed by people who won't necessarily get the joke."

Mitchell, it needs to be pointed out, has a history with snobbery. This is the same woman who in June was forced to apologize for bashing rural Virginia as "real redneck." During Monday's "MSNBC News Live," she also asserted that "critics" say the cartoon cover "depicts almost every false stereotype that Republicans have been launching against Barack Obama, plays into all the fears that are being generated on the web."

Of course, one might point out to Capehart and Mitchell that much of Middle America might not read the New Yorker. And that it's the members of the liberal media who seems to be most bothered by the "satire." 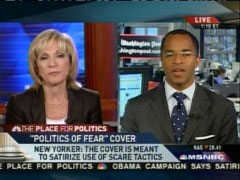 A transcript of the exchange, which occurred at 1:07pm, follows:

ANDREA MITCHELL: And now let's turn to Washington Post editorial writer Jonathan Capehart for more on this controversial New Yorker cover. Critics say that it depicts almost every false stereotype that Republicans have been launching against Barack Obama, plays into all the fears that are being generated on the web. Jonathan, do you think this is a big deal? Are we making too much of it or is this something the Obama campaign has to push back against?

JONATHAN CAPEHART (Washington Post): Good afternoon, Andrea. I think it's a big deal up to a point. Look, no one does satire better than the New Yorker, perhaps maybe the Onion does better satire. But the New Yorker is terrific at that and that cover is an example of that, every negative thing that has been floating around the internet for months now, even more than a year is depicted in that, in that cover. Things from more than a year ago and things right up to the most recent being the fist bump from the night when he-- when Senator Obama clinched the nomination. But here's the problem: And it remind me of another famous New Yorker cartoon, where you have the island of Manhattan, huge. It's a very famous map. Huge island of Manhattan, Hudson River, and then it's just the rest of the country is a sliver with California at the end. And I think that, you know, the folks at the New Yorker are very smart, very learned, learned people, but once you get outside of the confines of Manhattan and the Upper West Side, you sort of begin to wonder if anyone-- if there was a conversation around the table about how will this be viewed by people who won't necessarily get the joke. I mean, even with an American flag burning in the fireplace, I don't know if those folks, those 12 percent of people polled in that poll you just showed still believe that Barack Obama is, is Muslim. What is that cover going to do for their beliefs and whether he is a Muslim, whether he is truly an American, whether Michelle is this secret Angela Davis militant, I think it pushes-- it pushes the line on what's acceptable and what's offensive. And here's the one time you see the Obama campaign and McCain campaign agreeing on something. And they both said that the New Yorker cartoon cover, the New Yorker cover was offensive.

MITCHELL: You know, maybe we're dating ourselves. That iconic New Yorker cartoon was, I think, Steinberg, from the '70s and one of our associate producers here last night said in looking at that picture of Michelle and Barack Obama as depicted in the New Yorker, they said, she said, well, I don't get it. Why does she have the afro? What is she supposed to look like? 'Cause Angela Davis is a reference point, but not for everyone in the demographic.

MITCHELL: Right. No, I get it. David Remnick, the editor of the New Yorker, who is a brilliant editor and has really done extraordinary things with the magazine, was interviewed by Rachel Sklar on Huffington Post today and said, "Obviously, I wouldn't have run a cover just to get attention. I ran the cover because I thought it had something to say. What I think it does is hold up a mirror to the prejudice and dark imaginings about Barack Obama's-- both Obamas-- past and their politics. The fact is, it's not a satire about Obama. It's a satire about the distortions and misconceptions and prejudices about Obama." So the only question there is whether it is too sophisticated to actually be perceived the way it is intended.