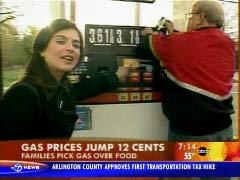 Various media outlets have jumped on the comments of Phil Gramm, an advisor to John McCain's presidential campaign, that when it comes to the economy, "we've sort of become a nation of whiners." However, these same organizations, such as ABC News, have done their part to promote such things as fretting over no more Christmas presents. For instance, on the November 12, 2007 "Good Morning America," reporter Bianna Golodryga hyperbolically warned that "some people are foregoing routine visits to the doctor and are opting for cheaper foods, like pasta and peanut butter, as opposed to protein, fruits and vegetables, in order that they can save as much money as possible." She added that for certain individuals, "Even holiday gift shopping won't be the same."

Now, this is the same program that on Friday's show observed that "conservative icon" Phil Gramm's "words have been damaging at a time when McCain is trying to convince voters he feels their pain." Certainly, GMA has done everything possible to assure viewers that the economic situation, which isn't a recession, is destroying their lives. On April 22, 2008, Ms. Golodryga (see file photo above) showcased a man who had been forced to skip church because of gas prices. She then intoned, "Some people even say that they are changing their diets, cutting down on costly prescription drugs or walking instead of driving to the local grocery store."

On July 3, 2008, previewing Fourth of July barbequing, GMA reporter Sharyn Alfonsi argued that hot dogs "could take a big bite out of [Americans'] wallets." As MRC intern Lyndsi Thomas pointed out, this was at a time when hot dogs were routinely on sale for less than a dollar, buy one, get one free.

CBS's "Early Show" has also gotten into the whining act. On July 2, 2008, the program covered the announced closing of 600 Starbucks and correspondent Ben Tracy asserted that with the economic slowdown, "After filling up their gas tanks, some coffee lovers don't have enough left to fill up their cups."

So, when discussing former Senator Gramm's comment about whining, media outlets should examine their own role in this debate. After all, telling viewers that Christmas and church are cancelled and hot dogs and coffee are unaffordable might have an impact on how Americans view their economic situation.