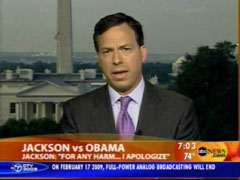 Over the course of three segments, various "Good Morning America" reporters and hosts attempted to understand and explain away Reverend Jesse Jackson's vulgar assertion that he would like "to cut [Senator Barack Obama's] nuts off." During the show open, co-host Diane Sawyer referred to the comments, made while Jackson was prepping to do an interview on Sunday and not aware his mic was on, as "colorful and cutting remarks."

Co-host Chris Cuomo interviewed the reverend and bizarrely insisted, "Clearly, you're a big supporter of Barack Obama..." Clearly? Again, Jackson's assertion was that he would enjoy cutting the "nuts" off the presumptive Democratic presidential nominee. Would a conservative be given such leeway in dismissing any consideration of real anger? The ABC program acted as though Jackson's meaning and intent were unclear. During a second segment, which featured "This Week" host George Stephanopoulos discussing the issue, an ABC graphic read, "Jackson vs. Obama: What Did Jesse Jackson Mean?"

Reporter Jake Tapper repeatedly called for looking at the "cut his nuts off" statement in a broader context. He asserted, "Jackson's vulgar language notwithstanding, he is far from alone in thinking Obama needs to put the struggles of black America within a larger societal context." Tapper also observed that Jackson "gave voice to a frustration among some in the black community with Obama's Cosby'esque, tough love approach to black America."

After remarking that Jackson's comments most likely won't hurt Obama as he tries to appeal to whites and moderates, Tapper reiterated, "On the other hand, Obama will address the NAACP next week and he might want to keep in mind that Jackson's frustrations are not just Jackson's."

During an interview with the civil rights activist, Cuomo also attempted to see the broader scope of the reverend's vulgar phrasing. He queried, "Let me ask you a question about context here. Is the emotion that you betrayed in your comments about Barack Obama, is that represent [sic] a larger frustration with him within the African-American community?" And he closed the segment by asking how embarrassing the whole controversy was when, clearly, Jackson would rather be talking about the "bigger issues." 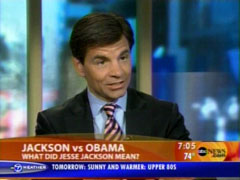 The "What Did Jesse Jackson Mean?" graphic from George Stephanopoulos's segment can be found at right. And a transcript of the Jake Tapper segment, which aired at 7:01am and a partial transcript of the Cuomo interview, follow:

DIANE SAWYER: This morning, Jesse Jackson caught on an open mic with colorful and cutting remarks about Barack Obama. A new interview this morning and we have it here.

SAWYER: But let's begin right now with the race for '08 and those words about Barack Obama from Jesse Jackson, one of his main boosters and of course one of the most prominent leaders in the African American community. Senior political correspondent Jake Tapper is in Washington to launch it all. Jake?

JAKE TAPPER: Good morning, Diane. Well, you know it's said in Washington a gaffe is when a politician accidentally tells the truth. Well, I think we need a new term for when an open microphone catches the private conversations of a public official as happened with Jesse Jackson talking privately, or so he thought, about his view of how Obama talks to the black community.

JESSE JACKSON: See, Barack been talking down to black people on this faith based-- I want to cut his [bleep] off.

TAPPER: Unaware his microphone was on before an interview, Jesse Jackson expressed anger that Barack Obama has, in Jackson's view, been overly critical of the African-American community in a video that aired on "The O'Reilly factor." Listen again to Jackson's comments.

JACKSON: See, Barack been talking down to black people on this faith based -- I want to cut his [bleep] off.

JACKSON: They were hurtful and wrong. That's the whole point. And that when you make mistakes, you should not equivocate. You should be quick to go on the offensive and not try to be evasive.

TAPPER: But Jackson also gave voice to a frustration among some in the black community with Obama's Cosby'esque, tough love approach to black America.

SENATOR BARACK OBAMA: More than half of all black children live in single parent households. Only we, as parents, can make sure that when our sons grow up, they treat women with respect.

TAPPER: Jackson's vulgar language notwithstanding, he is far from alone in thinking Obama needs to put the struggles of black America within a larger, societal context.

TAPPER: Obama's campaign said the senator accepted Jackson's apology, but Congressman Jesse Jackson Jr. was not so forgiving, saying of his father, quote, "I'm deeply outraged and disappointed in Reverend Jackson's reckless statements about Senator Barack Obama. He should keep hope alive and any personal attacks and insults to himself." Now, the politics of this are complicated. It probably does not hurt Obama as he tries to appeal to white independents and moderates to be seen as alienating Jackson for doling out tough love to the black community. On the other hand, Obama will address the NAACP next week and he might want to keep in mind that Jackson's frustrations are not just Jackson's. Diane?

CHRIS CUOMO: And a big political headline this morning: Jesse Jackson is in a TV studio, on mic but not on camera yet. Heard discussing Barack Obama, accusing him of talking down to the black community.

SAWYER: Yes, it was another one of those comments, caught when he thought he was off microphone and we are going to get a chance to talk to Reverend Jackson. He is standing by an exclusive interview coming up now.

CUOMO: Clearly a big supporter. Wants to clear this up as soon as possible.

CHRIS CUOMO: Reverend Jackson is at our Indianapolis affiliate, WRTV standing by to try and speak to us today. Technical difficulties. Hopefully, he's hearing me on a phone. Reverend, can you hear me?

JESSE JACKSON: Good morning, I can hear you.

CUOMO: Beautiful. Great to have you here. The situation is obvious. Clearly, you're a big supporter of Barack Obama, but clearly you used some very tough language. Basic question, do you like Barack Obama?

JACKSON: Very much. And I'm a long-standing supporter and because of my commitment to what he represents and the campaign, I was quick to apologize for any offense, any harm, any hurt. He was quick to respond very graciously and that's the good thing. My anguish is over. The limitations of the most fervent faith-based programs, because there is the issue of faith, hope and substance. With bridges collapsing and levees being overrun we need to focus on the cause item of some real commitment to reinvest in urban and rural America.

CUOMO: You're bringing up --

JACKSON: And that would be government-based and in some sense private sector based.

JACKSON: I don't think so. I think he enjoys great support because he is the leader in this rather transformative, redemptive moment and yet within the black community there are some severe structural crises-- Infant mortality rate is higher. Life expectancy is shorter. The most children in school with teachers less than three years experience, the highest murder rate and now the need to revive a ban on assault weapons, I mean, these things of great substance must be addressed, I think, with more passion and he is committed to that proposition. I think it deserves to have a greater emphasis.