Ex-Journalist Linda Douglass Returns to ABC to Shill for Obama 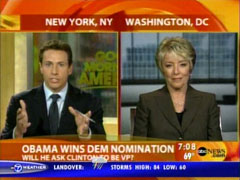 Former journalist Linda Douglass returned to ABC and appeared on "Good Morning America" Wednesday in her new role as a strategist and spokesperson for Barack Obama. Expressing no surprise or conflict that a longtime reporter would segue from recounting the news to representing a Democratic presidential candidate, GMA news anchor Chris Cuomo breezily introduced, "We're going to begin with someone representing Obama, whom we know very well here at ABC News. Linda Douglass, a former, respected journalist, a longtime ABC News family member. But now Linda is an Obama campaign strategist and spokesperson."

Wednesday's GMA featured a gaggle of journalists turned Democrats, Democrats who became journalists and also those with famous liberal families. Cuomo is the son of a former Democratic governor of New York and the brother of the current Democratic Attorney General from that state. And his segment with Douglass followed one with "This Week" host George Stephanopoulos, a former top aide to Bill Clinton. Cuomo, provided some Democratic spin of his own when he asserted that Senator John McCain, by giving a tough speech on Tuesday, did not revel in Obama's history-making moment. In a tease early in the show, he lamented, "But on the Republican side, the nominee John McCain was all business. He was not basking in history last night." While interviewing Douglass, he reiterated, "On a night that was history-making for Obama, McCain did not dwell on history."

The MRC's Brent Baker, in a May 21, 2008 NewsBusters post, summarized Douglass's years of liberal bias as a journalist. This included referring to Senator Jim Jeffords as a "moderate" and this December 23, 2000 critique of George W. Bush:

"George W. Bush's rhetoric is very inclusive. He means to be inclusive, and he's used very soft rhetoric in trying to reach out to minorities. But the fact is he's proposed no federal programs for minorities. He hasn't talked about using the federal government to broaden the safety net."

So, perhaps her new job isn't so different than the old one.

(Special thanks to MRC intern Peter Sasso for transcribing the segment.)

A transcript of the June 4 segment, which aired at 7:08am, follows:

CHRIS CUOMO: This morning we have two political insiders who are close to the Clinton and Obama campaigns. We're going to begin with someone representing Obama, whom we know very well here at ABC News. Linda Douglass, a former, respected journalist, a longtime ABC News family member. But now Linda is an Obama campaign strategist and spokesperson. Linda, a pleasure to see you this morning.

LINDA DOUGLASS: Good morning. Thanks for having me

CUOMO: Alright Linda, the niceties are over. Now let me ask you this--

CUOMO: Now last night obviously Hillary did not concede. The big question for you and your candidate this morning- is there a better chance that Obama will ask Hillary to become Vice President or that he will ask her to pull out?

DOUGLASS: [Laughs]: I -- I doubt that he's going to do either of those things right away. You know, they did talk on the phone last night. They had a very cordial conversation, he told her that he would like to get together and talk to her when she feels that it's right. You know, he's been saying all along, you know, It's up to her, when its comfortable for her. You know, he praised her lavishly in his speech last night. She ran an amazing campaign which he has been saying over and over and over again and he has nothing but the highest respect and admiration for Hillary Clinton.

CUOMO: And yet Linda, this is something that he has to deal with, right? I mean, this is, almost, you could almost see it as his first big test, going forward. How he deals with the situation last night, that Hillary did not appoint, you know -- did not endorse him as the nominee, pointed out that her 18 million people, that they needed to be heard. Do you have any other names on the list that you want to share? Could you think of another woman would who go before Hillary as vice president?

DOUGLASS: Well, [Laughs]-- There is no short list, there is no long list. There are many, many Democrats out there, many people out there in this country that he would certainly be looking at but this is a moment he just clinched the nomination. I mean he just became, this morning, the general election Democratic candidate. So this is something that's going to be worked on certainly in the next days and weeks but it certainly isn't worked on now. This is, a moment where he turns his focus to the general election campaign and John McCain and drawing the very sharp contrast that George was just talking to you about, the contrast, in you know in health care. Whether the tax cuts goes to the rich as John McCain wants, or to the middle class as Barack Obama wants, and getting out of Iraq and certainly spending our money in ways that don’t have to do with $10 billion a month in Iraq. These are the kinds of things he wants to be focusing on now.

CUOMO: And very interesting points to be made there as well. On a night that was history-making for Obama, McCain did not dwell on history. He went right at his experience. The obvious issue here, how does Obama prove that he is not anointed as McCain suggested in his speech, but that he's equipped to be president?

DOUGLASS: Well, I think he demonstrated he's equipped to be President in many ways. He has a long record already. He's been in public office for 12 years and has accomplished much, both in the Illinois State Senate and in the United States Senate. He's certainly the champion of ethics, ground breaking ethics legislation and he's been very active in leading the Senate to finding ways to try to convince President Bush to get troops out of Iraq and what he has demonstrated above all is great judgment. I mean, this is the candidate who understood before the war in Iraq that it was a war that shouldn't be authorized and shouldn't be waged and John McCain, you know, has embraced the policies of George Bush on the war, ah throughout. So this is going to be a very, very sharp contrast, and it is a debate that Senator Obama looks forward too having.

CUOMO: All right, Linda, appreciate the suggestions this morning and I look forward to talking to you going forward as well.