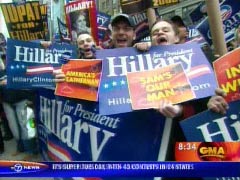 Taking a break from chanting slogans for Obama and Clinton, the crowd momentarily held signs, given to them by ABC, reading "In Sam We Trust" and "Sam's Our Man." Co-host Diane Sawyer couldn't have been more pleased at the synergy. She extolled, "It's the Sam surge, taking over the race to '08!" 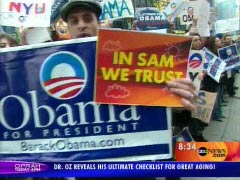 It shouldn't be particularly surprising that liberal followers of the two Democratic presidential contenders would be so eager to tout Sam Champion. After all, this is the man who once hosted a segment that wondered, "Will Billions Die from Global Warming? New Details on Thirst and Hunger." Additionally, in April 0f 2007, he featured activist Laurie David, an extreme leftist, as well as outspoken anti-Bush singer Sheryl Crow to promote their "Stop Global Warming College Tour."

Finally, Champion, in May of 2007, solemnly reported on a "serious experiment" of a liberal environmental activist who was forgoing toilet paper in order to save the planet. Of course, Champion never actually used the L-word.