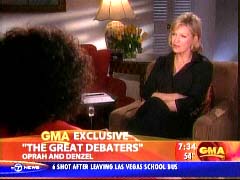 ABC host Diane Sawyer used an exclusive interview with Oprah Winfrey and actor Denzel Washington to gossip about liberal politics, to ask whether the talk show host would support Hillary Clinton as a backup to Senator Barack Obama and also to prompt Washington on the subject of which Democrat he's supporting.

In the interview, which aired during Wednesday's edition of "Good Morning America," Sawyer demanded to know, "Have you heard from the Clintons? Have you talked to the Clintons?" "What would you say to Hillary," she asked. After Winfrey simply reiterated her support for Obama, Sawyer pressed on and asked if the talk show host had decided "if Senator Clinton is nominated whether you'll show up for her or not?"

Sawyer also quizzed Mr. Washington, who was appearing with Winfrey to promote a film that he directed/starred in and that she produced, to declare his political allegiance. The GMA host prompted, "...Would Denzel ever pull an Oprah and go out campaigning?" Continuing the theme of Democratic loyalty, Sawyer insisted, "So you're going to say whether you're for [Obama] or not?"

Although Sawyer did press the question of what connection race has to do with the talk show host's endorsement, the ABC journalist generally served up softball queries. After wondering about serving in government, Sawyer suggested, "Secretary of Education in the Obama administration?" Sawyer also mentioned a moment in one of Winfrey's speeches for Obama, where the entertainer asserted that, in the past, she had voted for as many Democrats as Republicans. The GMA co-host asked the obvious, "Everyone says which Republicans?" However, when Oprah didn't respond, Sawyer didn't force an answer.

[UPDATE, 12:25 AM EST Thursday 12/13: Much of the Sawyer session with Winfrey and Washington re-ran on Wednesday's Nightline.]

It should be noted that on Monday, "Good Morning America" reporter David Wright gushed over Winfrey and even repeated talking points. Winfrey, Wright claimed, is "urging her fans to vote the dream, not just to settle for the inevitable."

A partial transcript of the segments, which began at 7:10am and continued into the 7:30 hour, follows:

DIANE SAWYER: And now we talk to Oprah about the Oprah factor in the race to '08. I was able to catch up with her yesterday in California to ask some of the questions from her weekend on the trail with Barack Obama. Did she get the political bug herself? Is race a factor in her support of him? And does she care that the polls show she did, indeed, give him a surge. As you'll see, she's sitting with Denzel Washington. In the next half hour, they'll talk about a movie they made together. But we start with her marathon political trip. As she said, a trip out of her pew.

SAWYER: You going to do more? 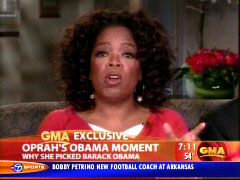 WINFREY: I don't know. I don't know. I mean, you know, one of the things I ask myself all the time is how can I be used in service? And I think that this, this past weekend was a really good use of my service.

SAWYER: Ads or anything?

SAWYER: But you had written the speech, which was unusual for you.

WINFREY: I've written a speech because I didn't trust myself just to stand up there and talk and this is too important of an issue I thought for me to be up there rambling around. The night before I was-- 3:00 A.M., I was still working on my speech. Yes, I was. And then I heard somebody say that his staff helped me write the speech, which insulted me, since I was, like, doing my homework late at night working on it myself. I didn't appreciate that. You know, I started out in Iowa in Des Moines, and I was really a nervous wreck. I was nervous. By the time I got to the next state, South Carolina, I was like, this is pretty good. Everybody--

SAWYER: Did you get the bug?

WINFREY: I did not get the bug. I didn't get the bug. I can't wait to go home. So at the end of the day, I'm really glad to be able to go back to my house and sit in my pew.

WINFREY: Well, I'm a little -- I get a little -- I can't -- well maybe the word is offended. To think that I would just be in support somebody because of the color of their skin would mean we hadn't moved very far from Dr. King's speech in 1963 saying that we want people to be judged by the content of their character and not by the color of their skin. And as I said in my, my opening speech in Iowa, I, over the years, have voted for as many Republicans as I have Democrats.

WINFREY [Clip from speech]: Over the years, I have voted for as many Republicans as I have Democrats.

SAWYER: Everyone says which Republicans?

WINFREY: Wait a minute-- Yes, they want to know that. And then, which didn't go over very well in that crowd. 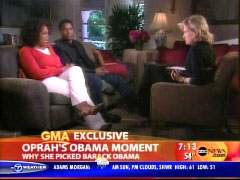 SAWYER: Are you going to be studying the polls to see if they've moved?

WINFREY: This is the thing. I feel this -- I did this because this is what I was supposed to do at this time. That's why it was so exciting for me to be out there, 'cause I'd never experienced that kind of energy. Everybody is there because they are concerned about the country.

WASHINGTON: What are they saying? I'm sorry, I'm --

WASHINGTON: What are they saying? What, what, what does -- what are they most afraid or concerned about?

WINFREY: I think what their there concerned about is people don't want to have to continue to work so hard and still be poor. They don't want to have to work so hard and still have to struggle so much. And that -- that is a basic concern of everybody. You're spending more and more and more money and feeling like you're further behind. And that's sort of the deepest sentiment.

WINFREY [Clip from speech]: So many of our schools don't serve the genius of our children.

SAWYER: Secretary of Education in the Obama administration?

WASHINGTON: I'll do your show while you're gone. I'll keep it going for four years.

WINFREY: No, I like my job and I'm not interested in being a part of government at all.

SAWYER: Which brings us back, would Denzel ever pull an Oprah and go out campaigning? If somebody said, come do that for me, would you do it?

WASHINGTON: They'll be calling now. We'll see. As I said earlier in the week, you know, Oprah can get people in the room, Obama has to keep them in the room.

SAWYER: So you're going to say whether you're for him or not?

WASHINGTON: Am I going to say that today? I'm going to say with my vote, yes. Yeah. Because I think, also, people should -- and I like Barack Obama. I do. In fact, I don't like anybody else more than I like him. And we're a year away. So I'm going to see what's going to happen.

SAWYER: And, again, the real Wiley debate team, out of more than 75 debates, lost only one. And the movie opens a week from Friday. Tomorrow, we'll have more footage of the real debate team and the real story. But, as we said, yesterday, in the interview, at a fancy hotel in Beverly Hills, I asked Obama's supporter, Oprah, what she would say if she ran into, say, Hillary Clinton. Have you heard from the Clintons? Have you talked to the Clintons?

WINFREY: No, I haven't heard from the Clintons.

SAWYER: What would you say to Hillary?

WINFREY: But I hear she's here.

WINFREY: I was hoping to run into her at the gym this morning. I'd say hi, how's things going?

SAWYER: Anything in particular though --

WINFREY: No, no, no, no. Because I've always said this. That my being in support of Barack Obama is not me being against Hillary Clinton or anybody else. It's just that for this moment in time this is what I know I am supposed to be doing. I feel compelled to do this. So my vote for is not a vote against anybody. It's just a vote for.

SENATOR BARACK OBAMA: We have the chance to come together --

SAWYER; And if you made up your mind if Senator Clinton is nominated whether you'll show up for her or not? Go out on the trail?

WINFREY: Well, obviously, I'm in this race because I'm believing that the person I'm speaking up for is going to take it all the way. And if that doesn't happen, I might have to readjust my thinking.