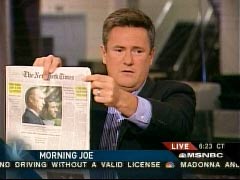 On Wednesday, nationally syndicated radio show host Mark Levin picked up and expanded on the story of MSNBC host Joe Scarborough lauding Al Gore, first reported in NewsBusters. Levin described "Morning Schmo," what he calls "Morning Joe," as "a program I rarely watch" and railed against Scarborough's declaration that "Al Gore wins" on global warming. The host also cited "our friends at the Media Research Center and NewsBusters" for bringing the comments of the "MSLSD" host to light.

Levin derided Scarborough's assertion that Gore has been proved right. He exclaimed, "We have zero control over [weather cycles] and in about 15 or 20 years, the cycle will slowly be pushing in the other direction and Al Gore and all the other freaks will be very, very embarrassed..." A transcript of the segment can be found below. Audio can be found on Levin's website (about 15 minutes into the October 17 program.):

MARK LEVIN: "Now, I often comment on a program I rarely watch, 'The Morning Schmo,' on MSLSD. 'Well, Mark, how can you comment on something you haven't watched?' 'Cause other people watch it and they grab the audio and I listen to it, like our friends at the Media Research Center and NewsBusters. And we have 'The Morning Schmo,' AKA Joe Scarborough on MSLSD and they're talking about Al Gore and I've told you this guy is a weasel sell-out. He was a Republican congressman, now he spends a lot of time putting down Republicans, not because they're being too liberal, he puts them down when they're actually right. Here's an example, and he's got a sidekick. Her name is Mika Brzezinski. I assume that is of the famous family of the failed Secretary of State, what's-his-ass Brzezinski? Anyway, listen to this exchange. Listen up for Al Gore and 'we Republicans.' He's always talking for 'we Republicans' now over there at MSLSD. Joe Scarborough, AKA 'The Morning Schmo.' Cut three. Go:"

JOE SCARBOROUGH: [Holding up copy of October 17 New York Times]: "You've got Republicans who are split now on global warming. It looks like it's inevitable soon enough. I think by the next presidential campaign, every candidate will be saying global warming is a phenomenon. Al Gore wins."

MIKA BRZEZINSKI: "I think so. We're getting there."

SCARBOROUGH: "Yeah. We called him an idiot in 1992, we Republicans, and about 16 years later, we agree with him. It's the great thing about being a Republi--"

BRZEZINSKI: "Yeah, there you go. Well, it takes you guys a while."

SCARBOROUGH: "You know what the good thing about being a Republican is? Never having to say you're sorry."

SCARBOROUGH: "We'll be back with more 'Morning Joe' in a minute."

BRZEZINSKI: "You just don't, do you?"

SCARBOROUGH: "No. Not at all."

LEVIN: "Now, what a rambling buffoon. Rambling buffoon. Quite the contrary, 'Morning Schmo.' The meteorologist that used to run the Hurricane service, you may be familiar with that, he's all over the place making the statement that many have made, which is, This is baloney, 'Morning Schmo.' Yes, it gets a little warmer. Then it gets a little cooler. These are natural cycles. We have zero control over them and in about 15 or 20 years, the cycle will slowly be pushing in the other direction and Al Gore and all the other freaks will be very, very embarrassed. But they don't get embarrassed, but they will look stupid, nonetheless. You know, Al Gore, he's a guy that has a background in zippo, that is quasi-average intelligence, and he's an expert on this subject. And the 'Morning Schmo' is right with him! We'll be right back."