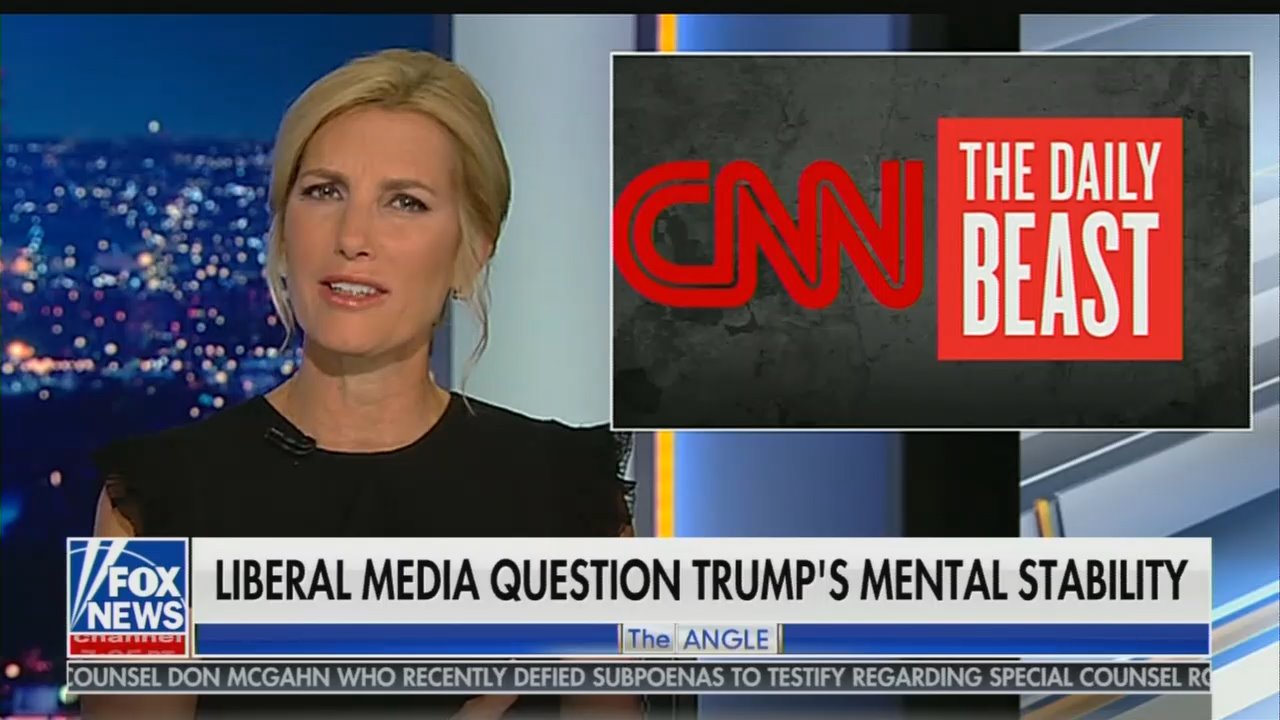 After playing some recent clips of 2020 Democratic frontrunner Joe Biden slurring his words, Ingraham addressed Cillizza’s op-ed during her opening monologue Tuesday night. Cillizza probably would not have appreciated Ingraham’s decision to play those clips, as his op-ed took aim at Fox News and President Trump for “daring to question the former VP’s health,” lecturing that “even partisanship should have its limits.”

Ingraham remarked “this is rich coming from CNN,” before pointing out that “CNN was a network where for more than two years, whenever the President comes up, nearly every anchor seems to be auditioning for Dr. Sanjay Gupta’s job.” In other words, many CNN on-air personalities have attempted to play the role of doctor by diagnosing President Trump despite the fact that they have no medical background whatsoever.

Ingraham proceeded to play clips of CNN personalities calling President Trump’s mental health into question, including James Clapper questioning “his fitness to be in this office” and Brian Stelter asking “is the President of the United States suffering from some sort of illness?” Since these comments surely qualify as raising “unfounded questions” about President Trump’s health, perhaps Cillizza should direct his lecture about “partisanship” towards some of his colleagues. Don’t bet on it.

In addition to calling out CNN’s hypocrisy, Ingraham also addressed a double standard by the liberal Daily Beast website. Ingraham read aloud an excerpt from a Daily Beast article by Justin Baragona declaring that “In the news business, it is considered irresponsible to spread baseless, potentially damaging rumors about public figures.”

The folks at The Daily Beast appear to have very short memories.

A transcript of the relevant portion of Tuesday’s edition of The Ingraham Angle is below. Click “expand” to read more.

LAURA INGRAHAM: Well, the well-being, the health of Biden, of course, has been a focus recently of, you know, many people in the public eye who watch these things, owing most likely to moments like these.

INGRAHAM: Well, in his column today, CNN’s Chris Cilizza raps the President and this network for daring to question the former VP’s health. Here’s the quote. “Even partisanship should have its limits. And one of those limits should be raising entirely unfounded questions about a presidential candidate’s health.” Entirely unfounded? Well, this is rich coming from CNN. Now, CNN was a network where for more than two years, whenever the President comes up, nearly every anchor seems to be auditioning for Dr. Sanjay Gupta’s job.

JAMES CLAPPER: I really question, question his ability to…his fitness to be in this office.

BRIAN STELTER: His actions have been described as unpresidential, as unhinged and sometimes even crazy. This brings me back to those questions that are tough to ask out loud on national television. Is the President of the United States suffering from some sort of illness?

INGRAHAM: Now, I have always found these questions about Trump’s mental acuity to be kind of self-defeating for Democrats and here’s my thinking. If Trump is supposedly not operating with both oars in the water, what does that say about the Democrats? I mean, they couldn’t beat him in 2016 despite spending, what, double the money and having almost the entire media, the entire entertainment establishment and Wall Street against Trump. And with Hillary. So, what does that say about their abilities?

Over at The Daily Beast, that’s a really moderate, very objective group, well their hypocrisy was also on full display. Yesterday, with Biden in the race, they ran this piece. “In the news business, it is considered irresponsible to spread baseless, potentially damaging rumors about public figures.”

Really? Well, is Rod Serling standing in the wings somewhere? This is The Daily Beast from March of 2018. “How Close Is Donald Trump to a Psychiatric Breakdown?” Or how about this from October 2017? “These 27 Top Shrinks Think Trump Might Be Nuts.” Well, maybe the rules of the “news business” have changed since then.