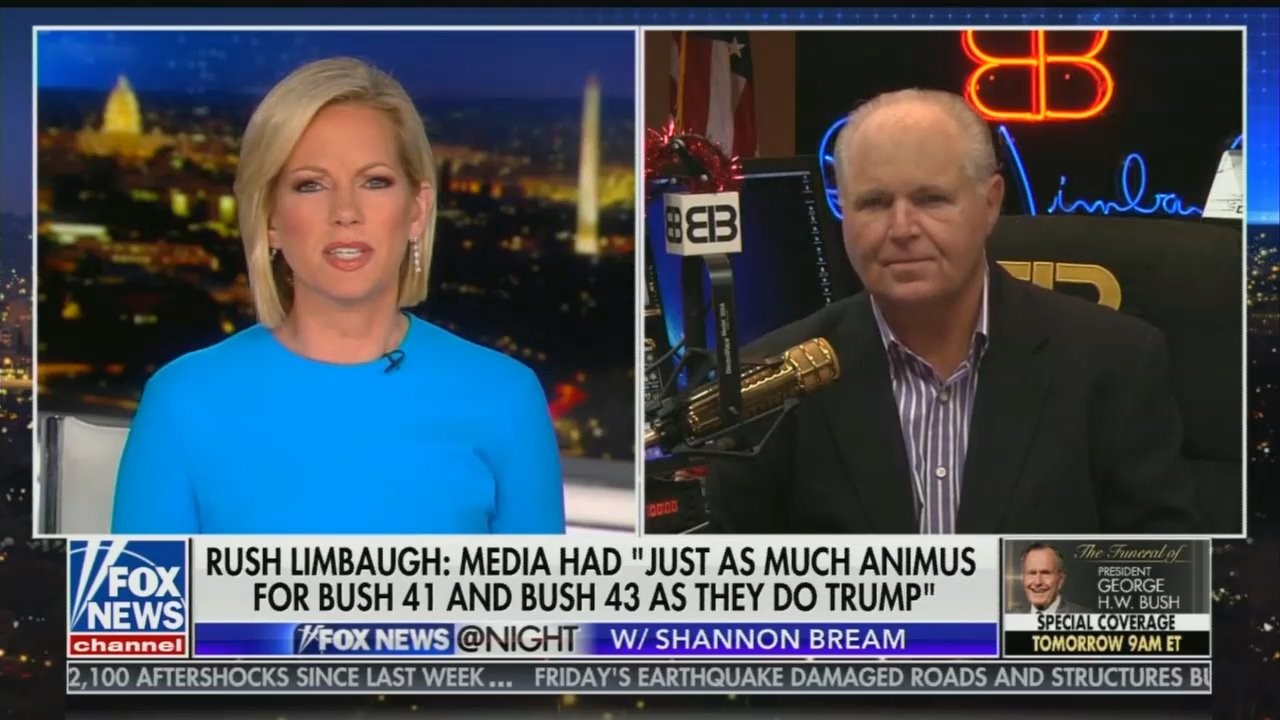 Nationally syndicated talk radio show host Rush Limbaugh made a rare television appearance on Tuesday’s edition of Fox News at Night With Shannon Bream. Bream asked Limbaugh to weigh in on the media’s coverage of President George H.W. Bush in the wake of his death last week. Not surprisingly, Limbaugh did not hold back when it came to calling out the media’s politically expedient and “phony” embrace of the late former President..

Bream began the segment by pointing out that “the coverage of President George H.W. Bush’s legacy has been mostly positive, with some exceptions” before introducing Limbaugh: “our next guest says the media never treated the President with this kind of civility when he was alive.” A recent New York Post article titled “Democrats really do love Republicans -- when they’re dead,” made a similar point.

Limbaugh described the media’s “fawning and talking about how he was so great” as “phony,” adding “they never treated him this way when he was President, they were vicious to him, like they are vicious and partisan to every Republican.” According to Limbaugh, the media had “just as much animus for Bush 41 and Bush 43 as they do Trump.”

Limbaugh argued that the media’s “sudden respect” for Bush is “just a vehicle for them” to “be able to contrast what they think Trump is versus the way they are telling us Bush was.” Limbaugh said that although “what they’re saying about him now is true,” referring to his “class,” “dignity,” and “sophistication,” “they never reported on him this way when he was President.” Limbaugh cited their current objective, which is “to get rid of Donald Trump,” as the primary reason for the media’s change of heart when it comes to the media’s  treatment of America’s 41st President.

Several recent NewsBusters articles validate Limbaugh’s claim that the media never gave Bush favorable treatment when he was actually in office. Many in the media slammed Bush as a racist for the “Willie Horton ad” ran by an outside group to highlight the soft-on-crime policies of his Democratic opponent in the 1988 Presidential election, Michael Dukakis. They argued that the “Willie Horton ad” served as a catalyst to the unsuccessful gubernatorial candidacy of Klan leader David Duke and the race riots in Los Angeles.

In the wake of her grandfather’s death, Today show correspondent Jenna Bush Hager reminded the American people of a Newsweek article portraying Bush, then the Vice President, as a wimp. The media’s nostalgia for the Bush era would seem more sincere if they actually showered him with the same favorable coverage that they have given him over the past week.

Limbaugh later discussed an interview he had with then-President Bush in June 1992 and argued that the fact that Bush 41 and Bush 43 did not fight back against relentless media criticism is one of the things that led to the rise of President Trump because “Republican voters have just been frustrated that candidates they elect don’t fight back.”

A transcript of the relevant portion of Tuesday’s edition of Fox News at Night is below. Click “expand” to read more.

SHANNON BREAM: The coverage of President George H.W. Bush’s legacy has been mostly positive, with some exceptions. We talked about those last night. But our next guest says the media never treated the President with this kind of civility when he was alive. Here to explain, Rush Limbaugh, host of “The Rush Limbaugh Show,” great to have you with us tonight.

RUSH LIMBAUGH:  Hey, pleasure to be with you. Thanks for having me.

BREAM: Okay so last night, we talked about a couple of headlines including one from the AP that had to be well, reworked shall we say and some others that had an immediate negative action, reaction to the death of President Bush 41. And now in these coming days, we see a lot of fawning and talking about how he was so great at bipartisanship, he was a different kind of Republican. What is that all about?

LIMBAUGH: Well, it’s phony. They never treated him this way when he was President, they were vicious to them like they are vicious and partisan to every Republican.  I think it’s just a vehicle for them, Shannon, to be able to contrast what they think Trump is versus the way they are telling us Bush was. The thing is that they never treated George W. Bush this way or George H.W. Bush, either one of them, this way. They had just as much animus for Bush 41 and Bush 43 as they do Trump, for different reasons.

But since the current objective is to get rid of Donald Trump, however they can do it, driving down public opinion or Mueller’s report and impeachment. Anything they can do to contrast Trump with what they say was the greatness and the way it ought to be, every good Republican in the media’s idea loses.

That is why they celebrate Trump -- rather, Bush, because what did he do? He raised taxes. He was bipartisan. He went against the interests of his own party. That is what made him a good guy. And it’s just, it’s just phony. It’s nothing more than a vehicle for them to continually contrast this made up image that they have of George H.W. Bush, which by the way, what they’re saying about him now is true. All of the class and all the dignity, all the sophistication but they never reported on him this way when he was President.

BREAM: Well let me ask you because you interviewed him many times and spent time with them over the years. What you make of this idea that he was a great compromiser, that there was more bipartisanship then, do you think he worked well with the Democrats, he was too trusting of the Democrats? What do you make of his legacy in that respect?

LIMBAUGH: Well, I had one of the greatest honors and thrills of my life. I was invited to spend the night in the White House during the campaign in 1992; the Lincoln bedroom. The evening featured about an hour and a half discussion of the campaign. At this point in time, Ross Perot was threatening him on the Republican side with much the same kind of appeal that Donald Trump has and had in the 2016 campaign. And at this point in time it was June of 1992 and there really wasn’t a considerable Democrat threat at the time.

They weren’t thinking that Bill Clinton was really all that serious a contender and I got the impression that they weren’t taking the campaign as seriously as they should have and I remember the President telling me that he loved Tom Foley, thought we could really work with Tom Foley and he had found them to be a very cooperative guy. George Mitchell, he said, was the most partisan man in Washington. But George H.W. Bush believed in the, in the idea of service and government working together and compromising and the end result was what was important to him. And as such, he didn’t fight back against any of the criticism, just like his son didn’t and I think those two facts, the fact that there was more attempted cooperation, no attempt to defend themselves against some of the most outrageous charges that they were faced with by the media and the Democrats is one of the things that led to Donald Trump.