The Real History of the Liberal Media and George H. W. Bush 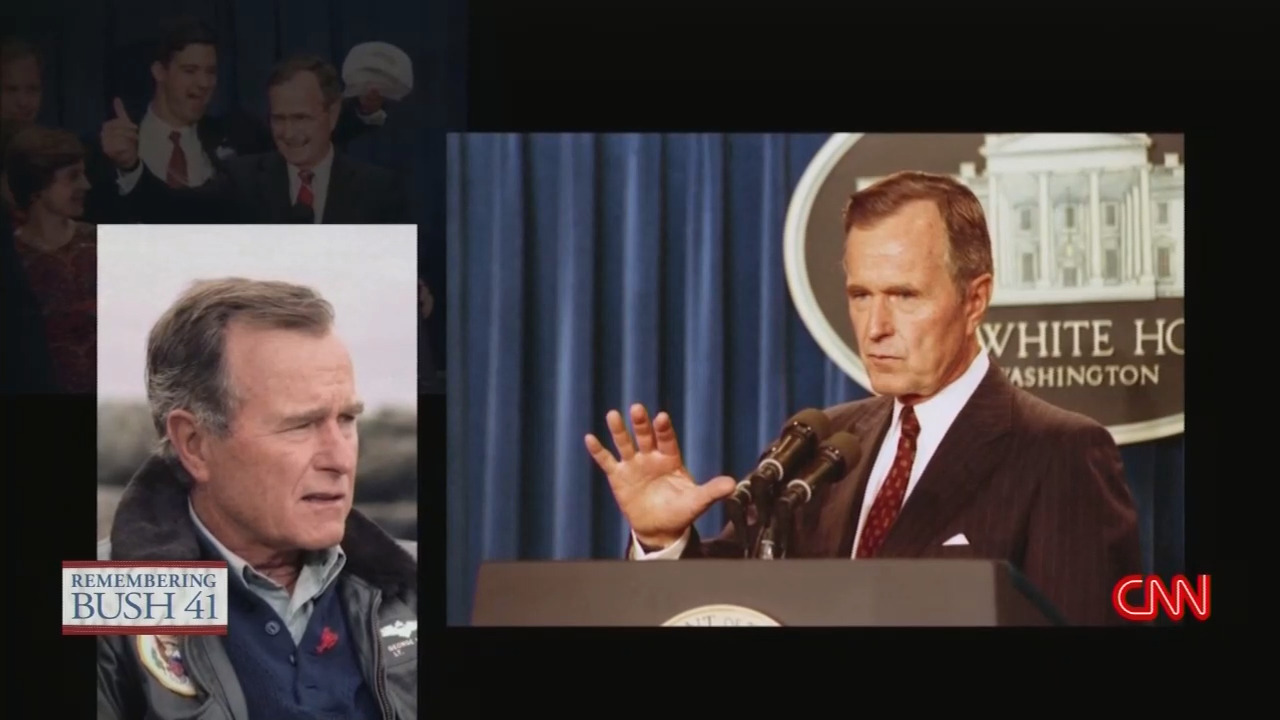 The (mostly) kind obituaries for former President George H. W. Bush have highlighted the decency and civility that marked his long career, often as a less-than-subtle jab at the current Commander-in-Chief.

“Never a proponent of ‘kinder and gentler’ politics, Mr. Trump prefers a brawl, even with his own party,” New York Times reporter Peter Baker juxtaposed in a Saturday morning article. On that morning’s Today show, NBC’s Peter Alexander scolded: “President Trump was not always so gracious about Bush’s hope for a kinder, gentler nation.”

On that same program, ex-Newsweek editor and Bush biographer Jon Meacham praised the late President’s bi-partisanship: “His substantive legacy is one of reaching out across what was a pretty wide aisle back in 1989 to 1993.”

The media’s current appreciation for the 41st President stands in sharp contrast to how they covered his presidential campaigns and his administration. When Bush was still in the arena, liberal reporters were among his most vociferous critics, who deplored his campaign tactics, accused him of exacerbating racial tensions, and bashed him for failing to adopt liberal policy positions.

■ Just days before the 1988 Iowa caucuses, CBS anchor Dan Rather tried to torpedo Bush’s presidential campaign with a slashing interview on the Iran-contra affair (falsely pitched to the Bush campaign as a routine profile). Rather berated the then-Vice President in a live interview on the Evening News — “You made us hypocrites in the face of the world! How could you sign on to such a policy?!” — but his over-the-top invective backfired, and Bush won the GOP nomination.

■ Reporters openly disdained Bush’s 1988 campaign against liberal Michael Dukakis. In what was supposed to be a news story, NBC Nightly News correspondent Lisa Myers faulted Bush’s rhetoric on the Pledge of Allegiance, asserting that it “leads some to recall Samuel Johnson’s observation that patriotism is the last refuge of a scoundrel.”

After the election, Time essayist Garry Wills frowned: “Bush won by default, and by fouls. His ‘mandate’ is to ignore the threats to our economy, sustain the Reagan heritage of let’s pretend, and serve as figurehead for what America has become, a frightened empire hiding its problems from itself.”

Six months into his term, the complaining continued. “The success of the Bush presidency is going to depend largely on his ability to prove that Bush as President is not the same as Bush as candidate. And the way he behaved on this [flag] issue, I think, is going to make it harder for him, because it’s a reminder of what kind of cheapness and demagoguery he was capable of and occasionally on some issues will be capable of again,” whined Time’s Strobe Talbott on the syndicated talk show Inside Washington. (Talbott’s political bent would be confirmed when he left journalism to take a senior position in the Bill Clinton administration.)

■ Reporters deplored the so-called “Willie Horton ad,” which was created by an outside group, not the Bush campaign, to highlight the soft-on-crime policies of Dukakis. For years, they insisted it was an out-of-bounds attack, and saddled Bush with the blame.

In 1989, when racist Klan leader David Duke ran for governor of Louisiana, ABC’s Judd Rose blamed Bush: “You might say that David Duke is the son of Willie Horton. Duke is more overt, of course, but he’s really just pushing the same buttons and sending the same coded messages that the Horton ads did so effectively for the Bush campaign last year.”

And in May 1992, during the Los Angeles riots, Boston Globe editorial writer Randolph Ryan blamed Bush for that, too: “There is a direct connection between the moral vacuity and coy racism of the Willie Horton President and the verdict of the Simi Valley jury [that sparked the unrest].”

■ The liberal media pressured Bush to renounce his most famous campaign pledge, to not raise taxes, casting it as irresponsible. Writing in the New Republic, Newsweek reporter Timothy Noah berated Bush for not adopting conventional liberal positions: “To be sure, I’m alarmed by the widening gulf between the rich and poor in our society. But George Bush’s ‘kinder and gentler’ rhetoric doesn’t include any practical solutions to the problem, such as a stiffer tax on the rich, or an expensive federal jobs program. In fact, Bush’s inaugural speech explicitly downplayed the use of public money to end society’s problems.”

After Bush caved to Democratic demands for higher taxes as the price for a budget deal, he was still condemned for making the promise in the first place. “Bush’s nationally televised paean to the homely virtues of a balanced checkbook might have carried a lot more weight in both the country and in Congress had he not won office two years ago with a promise to reduce the deficit without raising taxes. It was precisely such claims — that there is a free lunch after all — that got the U.S. into its fiscal mess,” Time’s Stanley Cloud complained in the October 15, 1990 issue.

NBC’s Andrea Mitchell sounded like a Democratic operative on the October 12, 1990 Nightly News: “The American people have failed to realize that they have a responsibility in all of this. But one of the reasons is that for ten years, Republicans in the White House, first Ronald Reagan and then George Bush, have been telling them they don’t have to pay for what they get.”

When economic growth slowed a year later, the media found a way to blame Bush and his original stance of low taxes: “Yes, times are tough because of mistakes we made in the past, including voodoo economics supported by George Bush, among others,” NBC weekend anchor Garrick Utley intoned on the January 25, 1992 Nightly News.

■ The media also found a way to diminish President Bush’s key foreign policy achievements. When the President used the military to topple Panamanian dictator Manuel Noriega, CBS’s White House reporter Wyatt Andrews fretted: “Mr. Bush is erasing his old image of being timid, but the new question now, almost overnight, is whether this President is exhibiting signs of being reckless.”

And after the successful liberation of Kuwait in 1991, U.S. News & World Report’s Matthew Cooper and Ken Walsh tried to tarnish that moment, too: “The political danger for Bush is that he could go overboard in exploiting his gulf triumph, possibly by lapsing into the mudslinging over patriotism that characterized his 1988 campaign.”

■ After the war, Bush’s approval ratings were the highest ever recorded by modern polling, but the media tagged him as racist for failing to embrace a liberal civil rights bill. “While we see George Bush saying that he doesn’t like the racist politics, boy, he’s letting his White House staff play it full bore,” Andrea Mitchell criticized on the June 11, 1991 edition of Today.

Talking about the same legislation three days earlier, CBS’s Bruce Morton had again used Willie Horton as a club against the President: “The Republicans labeled it a quota bill because they know white voters don’t like quotas. They hope, in fact, that quotas will do for President Bush in 1992 what Willie Horton did for him in 1988.”

■ Bush’s choice of Clarence Thomas for the Supreme Court was pilloried. Just a few days after the pick was announced in July 1991, columnist Carl Rowan blasted Bush and Thomas on Inside Washington: “Clarence Thomas is the best only at his ability to bootlick for Ronald Reagan and George Bush...They didn’t pick him because he was black. They picked him because he’s a black conservative....If you gave Clarence Thomas a little flour on his face, you’d think you had David Duke talking.”

When Thomas fought back against charges of sexual harassment, New York Times editorial writer Brent Staples blasted: “Judge Thomas has consistently played the race card, in the tradition of his patron, George Bush, whose Willie Horton commercial in 1988 touched a low point in political campaigns.”

Fellow Times writer Leslie Gelb blamed all of the ugliness on the President: “It was Mr. Bush who carried politics too far. By trying to pack the Court with conservatives....he took the Court into the political pit and, predictably, ignited an ugly political brawl.”

■ In their coverage of the 1992 campaign, journalists kept trying to punish Bush for the 1988 campaign they so despised. In May 1992, CBS’s Randall Pinkston flatly asserted: “Bush does not have a great civil rights track record with many black Americans, beginning with the use of the controversial Willie Horton ads in the ’88 campaign, through his initial veto of civil rights legislation.”

That same month, NBC’s Bryant Gumbel charged: “George Bush has been at the focal point of incidents that have exacerbated race relations in this country.”

Time’s Michael Kramer was even harsher, referring to the Los Angeles riots: “It would help, too, if the man who sanctioned the infamous Willie Horton ad during his 1988 run for the White House would admit his complicity in developing the images and code words that encourage whites to demonize blacks.”

Newsweek’s Joe Klein condemned Bush’s re-nomination convention: “The whole week was double-ply, wall-to-wall ugly...the Republican Party reached an unimaginably slouchy, and brazen, and constant, level of mendacity last week...[Bush] is in campaign mode now, which means mendacity doesn’t matter, aggression is all and wall-to-wall ugly is the order of battle for the duration.”

A September headline in the New York Times captured the media’s overarching spin: “Bush Is Harsh, His Backers Harsher.” In October, Bryant Gumbel presented it as fact that Bush would resort to low blows at a debate with Bill Clinton when he asked commentator John Chancellor: “How nasty do you expect George Bush to try to be?” Three days later on CBS, Harry Smith made his disdain clear, when he cast Bush’s questions about Clinton’s college-era trip to Moscow as “red-baiting junk.”

A poll of Washington media bureau chiefs and correspondents found that just seven percent voted for George H. W. Bush in 1992, vs. 89 percent for Bill Clinton (and two percent for independent Ross Perot).

“The White House press corps by and large detested George Bush,” Time’s William A. Henry III revealed after the 1992 election on a PBS special. He argued that the media’s coverage of Bush was so one-sided, it hurt journalism among conservative and Republican voters: “Their real contempt for him showed through in their reporting in a way that I think got up the nose of the American people.”

Keep all of this in mind as you hear journalists trumpet their praise of George Bush this week. They weren’t always singing the same tune.