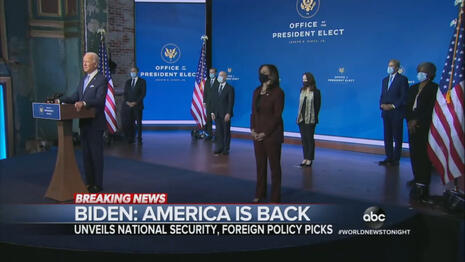 The transition has only just begun, but already the liberal media are fawning over Joe Biden’s “historic” choices to staff his administration, as he selects “very experienced,” “very diverse” and “not political” “adults in the room” who actually “know what they are doing.” PBS’s Yamiche Alcindor even suggested Biden’s bland bureaucrats were “superheroes” who will “save us all.”

The contrast with the media’s reaction to President-elect Trump’s selections four years ago could not be more stark. Then, the media slashed those cabinet choices as a “racially insensitive” group of “hard-line” “radicals” and “ignoramuses” who will bring about “environmental disaster” and “calamity to the poor.”

During the Trump years, the media justified their over-the-top hostility by pointing out that their job is to hold the powerful accountable. So here’s how they treated the incoming Republican Cabinet four years ago, and compare that to the commentary you’ll be hearing over the next few weeks as the Biden Cabinet is announced:

A “Hard-Line” Team of “Radicals” and “Ignoramuses” 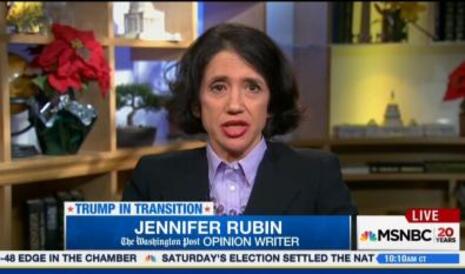 “What we have are ignoramuses, billionaires and a few generals....This is pretty frightful stuff. You have loads of people who have never been in government who don’t understand the difference between business and government.”
— Washington Post columnist Jennifer Rubin on MSNBC’s AM Joy, December 11, 2016.

“President-elect Donald J. Trump moved quickly on Friday to begin filling national security posts at the top echelons of his administration, selecting a group of hawks and campaign loyalists who reflect the hard-line views that defined his run for president.”
— New York Times article by Julie Hirschfeld Davis, November 18, 2016.

“So you have people who I would say don’t fit into exactly a team of rivals, but to many people a team of radicals.”
— Commentator Juan Williams on Fox News Sunday, November 20, 2016.

“There are millions and millions of non-white Americans, who are looking at the group — not because it’s so white — but also because if you take those people together — Bannon, Flynn and Sessions — all three of them have a history of being involved at a minimum racially insensitive endeavors....That’s a hardline group, on immigration, on foreign policy, on politics....that’s an ideological group and that’s a hardline group.”
— Bloomberg Politics editor John Heilemann on Sunday Today with Willie Geist, November 20, 2016. 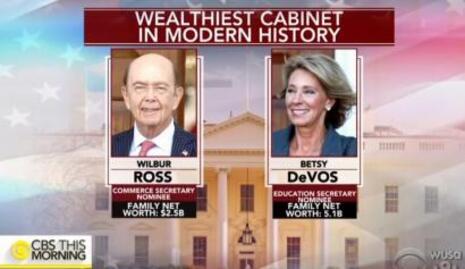 “[Trump’s] top cabinet picks come under fire for ties to bailouts and Wall Street. Critics saying this is not how you drain the swamp....”
— Co-host Savannah Guthrie on NBC’s Today, December 1, 2016.

“You know, before the election was over before election night and right after I described the Trump group as a pirate ship. Well, some of these nominees it looks like it’s a pirate yacht...”
— Political analyst Matthew Dowd on ABC’s Good Morning America, December 1, 2016. 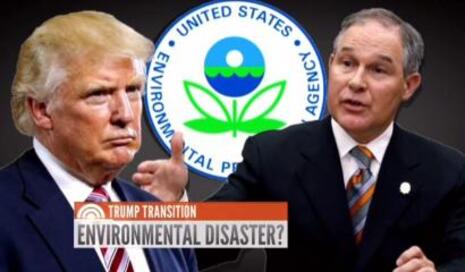 Anchor Scott Pelley: “The President-elect filled more administration posts today, putting a global warming skeptic in charge of protecting the environment.”...
Nancy Cordes: “The Sierra Club said today, ‘Having Scott Pruitt in charge of the EPA is like putting an arsonist in charge of fighting fires.’”
— CBS Evening News, December 7, 2016.

“Why don’t they just call it the ‘Environmental Pollution Agency’ instead of the Environmental Protection Agency, because he is going to dismantle everything in place — the air you breathe, the water you drink.”
— Co-host Joy Behar on ABC’s The View, December 8, 2016.

Co-host Paula Faris: “One thing, we looked at the hiring of Jeff Sessions for attorney general. And these were unfounded accusations from 30 years ago. That he-”
Co-host Sunny Hostin: “He’s a bigot...Somebody testified under oath that he called an African-American man a boy. He’s a bigot.”
— ABC’s The View, December 2, 2016.

Undoing Civil Rights and a “Calamity” for the Poor

“Ben Carson, with zero housing experience, named head of HUD. Another day in the kakistocracy.”
— December 5, 2016 tweet by NBC News legal analyst Lisa Bloom. (“Kakistocracy” is a term meaning a state or country run by the worst, least qualified, or most unscrupulous citizens.)

“Yet another calamity — contemptuous choice for critical dept. Wonder if Carson would like a housing expert to perform brain surgery on him.”...
“Trump choice of Carson will spell calamity for poor but not just poor. It betrays utter ignorance about cities and economic development.”...
— December 5, 2016 tweets by New York Times architecture critic Michael Kimmelman.

Saddened by the Lack of Big Government Liberals

“[Secretary of Energy-designate Rick] Perry joins an emerging Trump Cabinet at odds with some of the core missions  of their agencies: the nominee for the Department of Human Services wants to repeal ObamaCare; the nominee for the Environmental Protection Agency has previously filed suits against the agency over regulations; and the nominee for Labor Secretary wants to repeal regulations guaranteeing overtime pay and worker safety.”
— Correspondent Major Garrett on the CBS Evening News, December 13, 2016.

“Seven men and one woman named by Mr. Trump to run vast government agencies share a common trait: once they are confirmed, their presence is meant to unnerve — and maybe even outright undermine — the bureaucracies they are about to lead. Some of those chosen — 17 picks so far for federal agencies and five for the White House — are among the most radical selections in recent history.”
— Correspondent Michael Shear in a December 18, 2016 front-page New York Times article, “Outsiders Selected by Trump Aim to Unnerve Washington.”