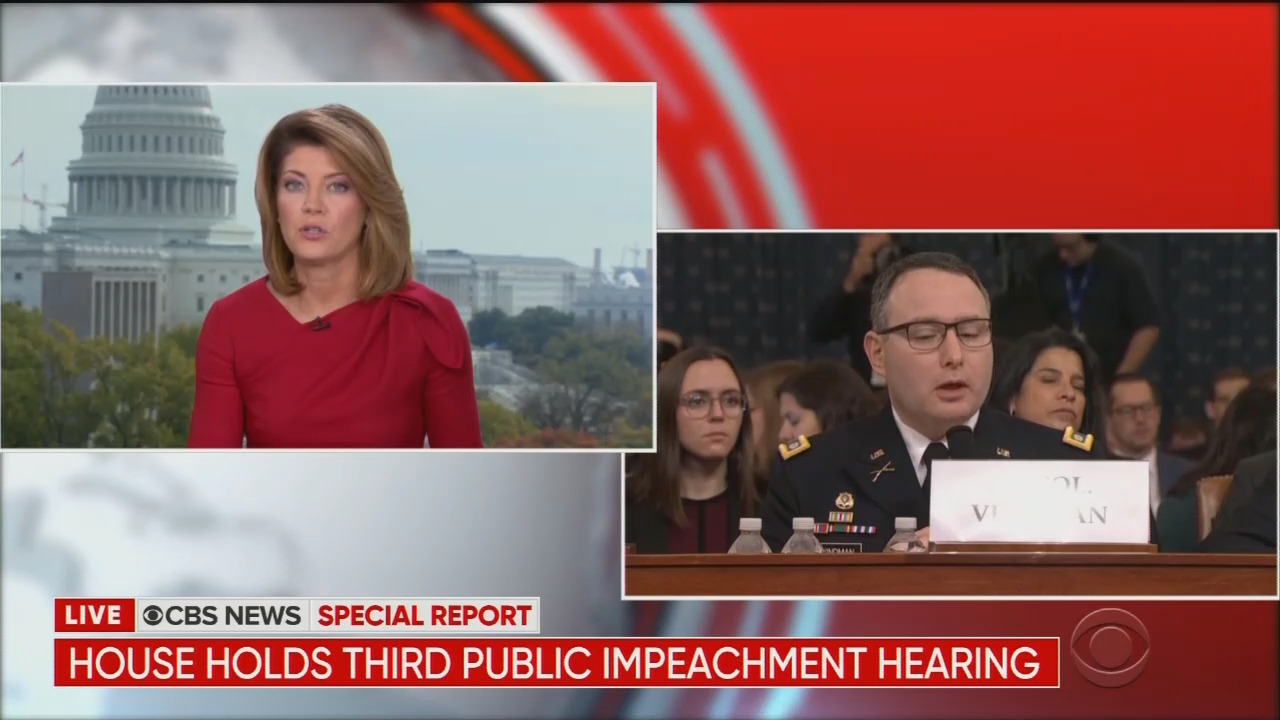 The TV ratings took another dive on Tuesday morning for Day 3 of the Democrats’ impeachment hearings, with only 11.4 million tuning in to ABC, CBS, NBC, CNN, MSNBC and the Fox News Channel for the testimony of Lt. Col. Alex Vindman and an aide to Vice President Mike Pence, Jennifer Williams.

But according to early Nielsen Media Research, the combined audience for those networks grew to 13 million for the afternoon/early evening session featuring the first two witnesses sought by the Republican minority, former U.S. Special Representative for Ukraine Kurt Volker and ex-NSC aide Tim Morrison.

Last Wednesday, 13.1 million watched the first day of testimony, while 12.7 million tuned in for Day 2 on Friday.

Also on Day 3, CBS actually bailed out of Vindman’s testimony at around 12:20 in the afternoon, long before it concluded, with anchor Norah O’Donnell advising viewers to watch the rest on CBS’s digital streaming service. In place of the hearings, early-afternoon CBS viewers got to see a fresh episode of The Young & The Restless.

On Tuesday night, the liberal networks were enthusiastic about the testimony during the lower-rated morning session. “As if he was the hero they needed to vanquish their nemesis,” my colleague Nick Fondacaro summarized last night, “the liberal media fell in love with the public impeachment testimony of White House Ukraine adviser Lieutenant Colonel Alexander Vindman.”

But approximately 1.5 million more viewers watched the afternoon session that produced headlines such as the one on FoxNews.com: “Morrison, Volker undercut claims of ‘quid pro quo,’ ‘bribery’ and ‘cover-up’ in pivotal day of testimony.”

Of course, with an estimated 254 million adults living in the United States, nearly everyone was doing something else on Tuesday besides watching these hearings.