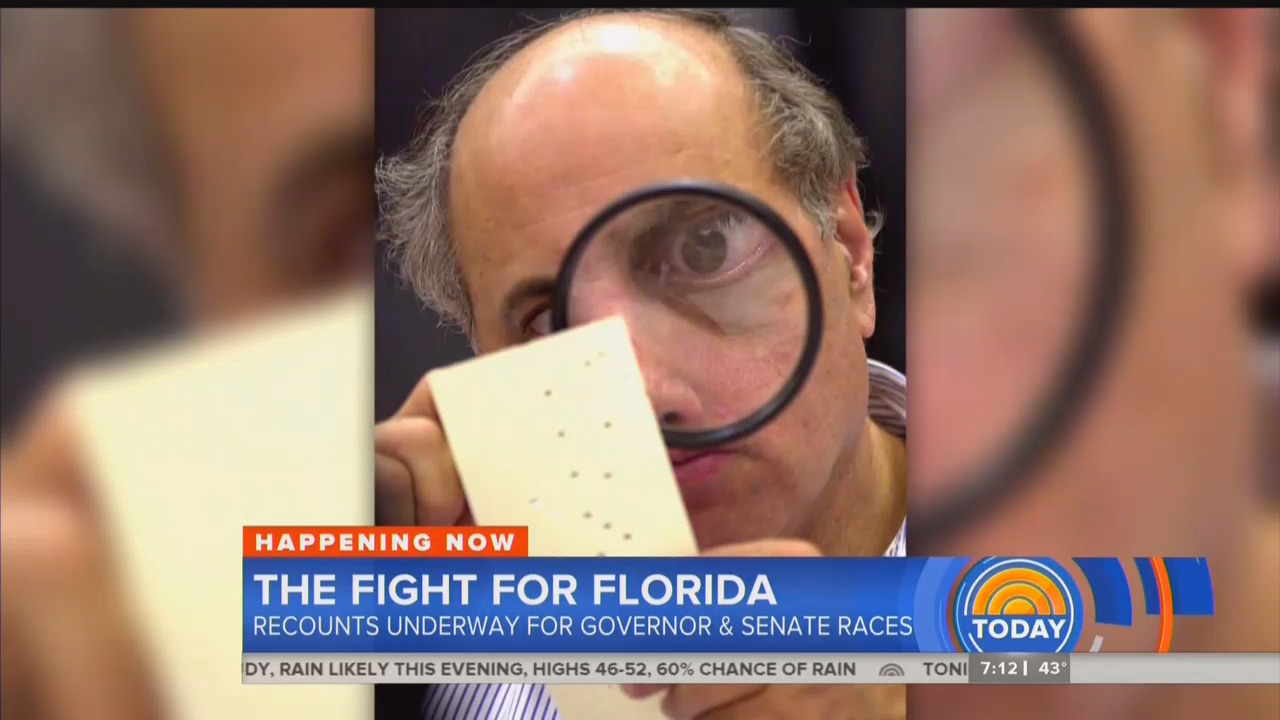 It’s been 18 years since a presidential election was clogged and stalled by a recount after a close finish in Florida, and now it’s happening again after Republicans led the election night tallies for Senator and Governor in the state.

This time, the national media are scoffing at complaints that Democratic election officials could be seeking to overturn the will of the voters. But back in 2000, those same outlets dripped with suspicion that Florida’s Republican Secretary of State, Katherine Harris, was conspiring to steal that election away from Democrat Al Gore.

The media’s push to install Gore in the White House began before the first sunrise after the polls closed. At 3:30am ET during NBC’s live election coverage, then-Newsweek writer Jonathan Alter insisted that since “recounts are as much an art as a science,” the only option was to ignore the Constitution and make Gore the winner: “If it turns out that Al Gore wins the popular vote nationally, there will be intense pressure in this country to have him become the President. Most people think the guy with the most votes wins.”

One claim put forward by the pro-Gore forces was that thousands of befuddled Democrats had actually voted for Pat Buchanan due to a bad ballot design in Palm Beach County. One voter making this claim, Andre Fladell, appeared on CNN’s Larry King Live on Thursday, November 9: “I had no idea that in this country you have to read zig-zag and diagonal to know who you're voting for,” he complained. “I didn’t go there to take a test. I went in to vote for President.” He told CNSNews.com that when it came to voting, “I wasn’t too bright.”

The next day, Fladell and two other Palm Beach voters also appeared on ABC’s Good Morning America, where they received sympathy from co-host Diane Sawyer, who called their stories “the most eloquent testimonials about American democracy we’ve ever heard.” The only problem: All three were sophisticated Democratic activists, not ordinary voters.

Yet the media preferred to take their claims of voting for the wrong candidate at face value. By Sunday, ABC’s George Stephanopoulos confidently claimed that “there is no question, or very little question, that Al Gore won the votes cast in the state of Florida....If this race is counted fairly, Al Gore won more votes in Florida.”

If Gore was the media’s victim, their villain was Florida Secretary of State Katherine Harris. In her magazine’s November 27 issue, Time’s Margaret Carlson sneered that Harris “mixed the pious certitude of Linda Tripp with the hauteur of a Dynasty protagonist....Until the Florida Supreme Court enjoined her from certifying the vote, Harris, often compared to Cruella de Vil, snatching ballots rather than puppies, was briefly the most powerful woman on the planet.”

When Harris followed the timetable established by Florida law and certified the final results on November 26, CBS’s Dan Rather dismissed what he called the “believed certification” as merely how “she sees it and she decrees it.”

Two days later, Rather suggested to one Florida Republican that “the fix” was in in Florida: “You’ve got a Republican Governor, you’ve got not just a majority but a dominant Republican state legislature and a Republican Secretary of State.’ And under those circumstances, so the quote goes, there’s no way Al Gore can win this.”

In the December 11 Newsweek, Jonathan Alter warned that Bush would be demonized if the media’s inevitable review of all of the state’s ballots showed Gore winning: “What will the country say? ‘Ooops’ isn’t going to cut it....However agreeable and successful he turns out to be, the new President is doomed to be seen by many Americans as a bastard.”

By then, Alter’s then-Newsweek colleague, Howard Fineman, had already admitted the obvious: that the media were coddling Gore’s effort, and would have been blasting Bush as a sore loser if he’d been the trailing candidate.

Fineman chuckled, before blurting out the truth: “Oh, my God. Are you kidding? That George Bush was a crybaby, that he was the spoiled son of a failed President. You know, you could just hear, the personal attacks on Bush would be just absolutely vicious.”