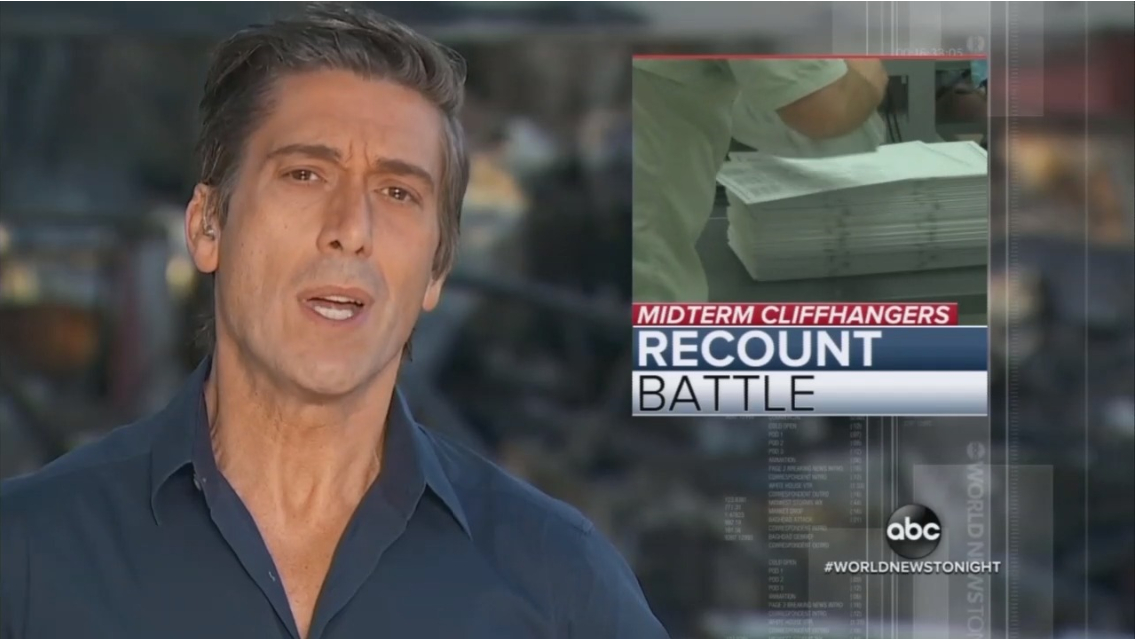 All eyes were on Florida’s contentious ballot recount in gubernatorial and U.S. Senate races as Democratically-aligned elections supervisors in Broward and Palm Beach Counties were accused of election incompetence and shenanigans by GOP Senate candidate, Governor Rick Scott. Despite Florida court rulings against the supervisors for their illegal handling of ballots, the liberal broadcast networks (ABC, CBS, and NBC) downplayed the idea that anything was amiss.

Most of the focus was on Broward County Elections Supervisor Brenda Snipes, who has a disturbing history of election shenanigans, including illegally destroying ballots, accusations of ballot stuffing, and posting results before the polls even closed. This time around, she was caught “accidentally” (according to the Miami Herold) mixing invalid provisional ballots in with valid ones and hiding the number of ballots that still needed to be counted while she kept "discovering" new ballots.

Despite the fact Snipes was breaking the law (with rulings against her), CBS’s Manuel Bojorquez spent a portion of the CBS Evening News downplaying her actions and making it seem like she was just being targeted. “Broward County's Supervisor of Elections, Brenda Snipes, who has been faulted by Republicans for not initially following vote reporting procedure, defended her process today,” he reported.

But in reality, there were even people on the left ripping Snipes for her apparent incompetence. According to The Daily Caller, far-left liberal college professor and former Democratic congressional candidate Tim Canova had said Snipes should be in prison. Bojorquez never mentioned the rulings against Snipes this year.

But Bojorquez wrapped up his segment noting: “A judge said he saw no evidence of voter fraud here and denied Scott campaign request to impound the machines and ballots when they are not in use.”

OQUENDO: But today, a Florida judge found no sign of fraud.

JUDGE JACK TUTER: I am urging, because of the highly public nature of this case, [transition] to ramp down the rhetoric.

In contrast, during his report on NBC Nightly News, correspondent Kerry Sanders noted Snipes’ shady dealings. “Republican questions largely surround Broward County and its embattled Elections Supervisor, Democrat Brenda Snipes, whose office in 2016 was found to have destroyed ballots. And this year, admitting she counted 22 provisional ballots that have already been rejected,” he said, effectively giving a little bit of credence to the accusations.

“But so far, no law enforcement agency has found any evidence of fraud causing them to launch an investigation,” Sanders also said. He also played a clip of incumbent Democratic Senator Bill Nelson suggesting Scott didn’t want all the legal votes counted. But Sanders failed to report that Nelson (and gubernatorial candidate Andrew Gillum) wanted to count votes of non-citizens.

Sanders said there was no evidence of Republican accusations, but he breathlessly pushed Nelson’s suggestion “one machine in Broward County malfunctioned, skipping close to 25,000 votes.” Apparently, Democrats don’t need evidence for their accusations to get support from the liberal media.

DAVID MUIR: Back here at home tonight, and to Florida now. The state famous for its presidential recount. And now a judge there is urging calm tonight in the Senate race. More than 8 million votes cast, fewer than 13,000 separate Republican Rick Scott from Democrat Bill Nelson. So, tonight, the recount is underway, and so is the drama. ABC's Victor Oquendo in Broward county tonight.

RICK SCOTT: Senator Nelson is clearly trying to find -- to try and commit fraud to try to win this election.

OQUENDO: But today, a Florida judge found no sign of fraud.

JUDGE JACK TUTER: I am urging, because of the highly public nature of this case, [transition] to ramp down the rhetoric.

OQUENDO: David, they are scanning ballots right behind me. The deadline is Thursday. And if the candidates are still separated by just a quarter of one percent, currently about 20,000 votes, then that triggers a manual recount. David?

ANA CARBONELL: We're concerned in terms of the shenanigans that have taken place in these two supervisors of elections.

BOJORQUEZ: The Democrats, including incumbent Bill Nelson, have called for Scott, the current governor, to recuse himself. Here at the Broward County Supervisor of Elections, there are attorneys, and observers from both sides and the media, but the focus is on the ballots on the other side of this glass. Both the governors and Senate races are close. A machine recount is mandatory in races that are less than half a percent apart and must be complete by 3:00 P.M. Thursday. If the races then end up within a quarter of one percent, a hand recount of questionable ballots would need to be done by November 18th. That conjures up memories of the 2000 presidential election that George W. Bush eventually won by 537 votes.

BOJORQUEZ: Accusations of fraud and vote suppression have been flying back and forth. Broward County's Supervisor of Elections, Brenda Snipes, who has been faulted by Republicans for not initially following vote reporting procedure, defended her process today.

BRENDA SNIPES: I have worked here for about 15 years, and I have to say, this is the first time that this office or I have been under such attacks, so if we make mistakes, we own our mistakes.

BOJORQUEZ: Today, a judge said he saw no evidence of voter fraud here and denied Scott campaign request to impound the machines and ballots when they are not in use. He did request additional deputies be present here and urged both sides “to the ramp down the rhetoric”. Jeff?

LESTER HOLT: They’re racing against the clock in Florida to finish recounts in the Senate and governor's elections by Thursday's deadline and in Mississippi, a candidate facing a runoff has sparked controversy. We have it all tonight starting with NBC's Kerry Sanders.

KERRY SANDERS: Tonight in Florida, a race to recount 8 million votes before Thursday. Republican Rick Scott had narrowly edged out Democrat Senator Bill Nelson on election night. But today, a judge refusing a Scott request to impound counting machines in Democratic Broward County when they’re not in use. Instead, requesting three sheriff's deputies guard ballots and issuing this warning.

SANDERS: That comes after Scott charged Nelson with fraud.

SANDERS: And President Trump tweeting today: “an honest vote count is no longer possible and ballots infected, must go with election night.” But so far, no law enforcement agency has found any evidence of fraud causing them to launch an investigation. Republican questions largely surround Broward County and its embattled Elections Supervisor, Democrat Brenda Snipes, whose office in 2016 was found to have destroyed ballots. And this year, admitting she counted 22 provisional ballots that have already been rejected.

Have there been mistakes?

BRENDA SNIPES: [Long pause] Um. [Long pause] There have been issues that did not go the way we wanted, so we could call it a mistake.

SENATOR BILL NELSON: And one fact is that Rick Scott isn't interested in making sure every lawful vote is counted.