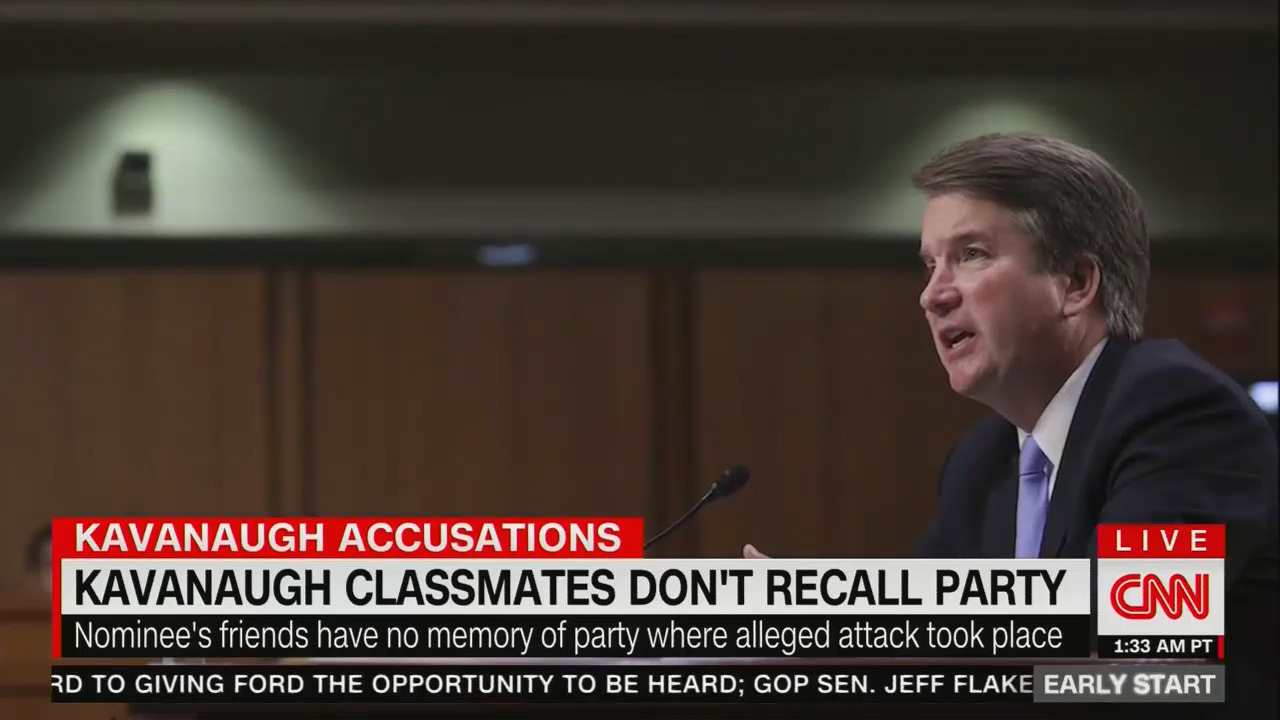 Yet today, CNN viewers have barely heard a peep about these denials, even as the Kavanaugh story dominates their on-air coverage. From 4:00 a.m. to 2:00 p.m. Eastern, CNN spent 3 hours and 23 minutes talking about the Kavanaugh controversy, but only about eight minutes of that were devoted to passing along these confirmations of Kavanaugh’s denial.

Former classmate Mark Judge, who was named by Ford as being in the room during the alleged assault, communicated his denial to the Senate Judiciary Committee on Tuesday: “I have no memory of this alleged incident....I do not recall the party described in Dr. Ford's letter. More to the point, I never saw Brett act in the manner Dr. Ford describes.”

During ten hours of on-air programming on Wednesday, CNN gave a mere five minutes to Judge’s statement, half of it (2 minutes, 34 seconds) during their little-watched 4:00 a.m. and 5:00 a.m. Eastern hours. During the 4:00 a.m. hour, Early Start co-host Christine Romans dismissed Judge’s denial: “What is his credibility in saying he didn’t see this kind of behavior if he has written extensively about become blackout drunk with his friends — blackout drunk with his friends.”

Another classmate, Patrick Smyth, also on Tuesday sent a letter to the Judiciary Committee saying that while he believed he was one of the other partygoers named by Ford, he knew of no such event: “I have no knowledge of the party in question; nor do I have any knowledge of the allegations of improper conduct she has leveled against Brett Kavanaugh.”

But former FBI Assistant Director Tom Fuentes, asked about how the FBI might conduct the investigation sought by Christine Blasey Ford and her Democratic supporters, suggested at the end of the 12:00 p.m. Eastern hour that investigators would be very interested in the denials of the others named by her:

“We have seen this public reporting of another person, who since has said, ‘I wasn’t even there.’ So right off the bat, you have a discrepancy concerning her credibility,” Fuentes told Inside Politics anchor John King. So her credibility in this is a key factor, and it’s going to have to be.”

While the statements of Kavanaugh supporters were barely mentioned, during the 1:00 p.m. hour of Wolf, fill-in host Jim Acosta spent 6 minutes, 5 seconds interviewing Ford friend Samantha Guerry, who predictably vouched for her high school classmate: “She’s a very substantial woman of great intellect and integrity. She is a bio-statistician...She is someone who has really devoted her career to accuracy and data and facts. She’s someone who doesn’t put pen to paper unless she can prove it.”

But later in the same interview, Guerry — who said she was also acquainted with Kavanaugh in high school — admitted that she’d never heard any stories about Kavanaugh treating women badly until Ford’s story surfaced, and could also not confirm the notion that Kavanaugh drank too much while at Georgetown Prep. Here’s a short transcript (emphasis added): 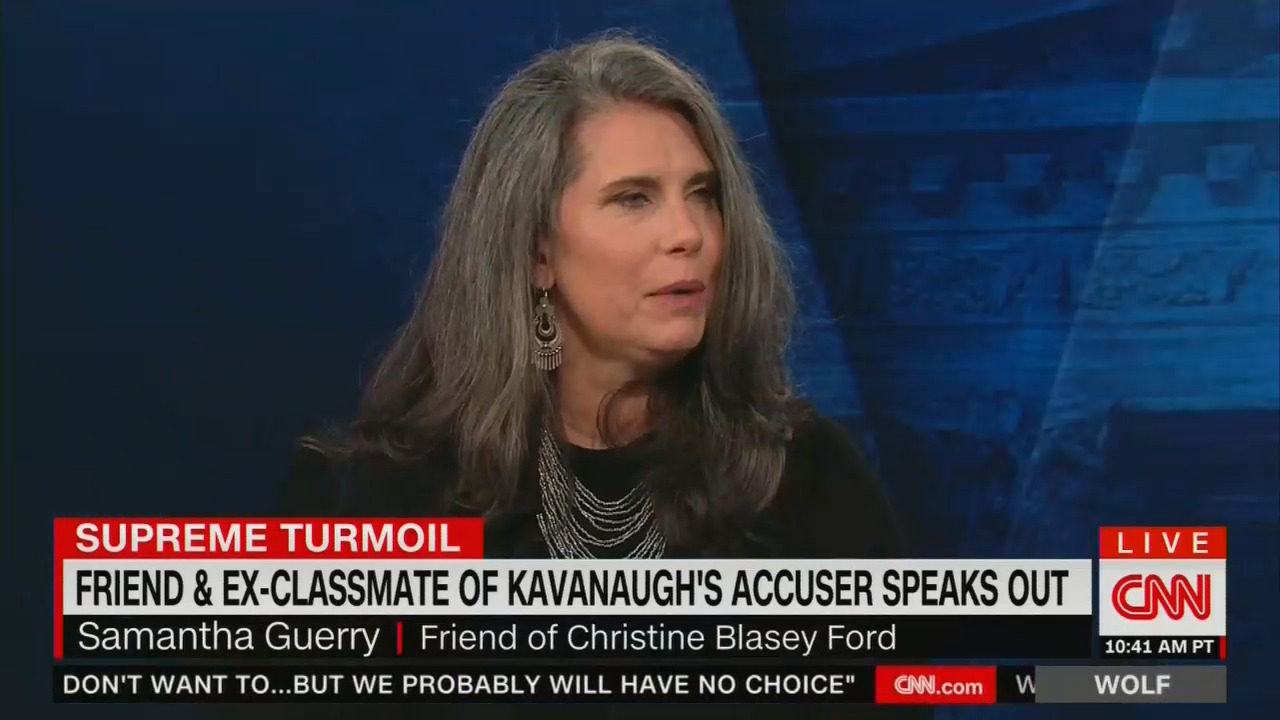 ACOSTA: Do you know Brett Kavanagh at all?

GUERRY: I did. He was an acquaintance of mine in high school.

ACOSTA: And did he have this reputation for excessive drinking during that time?

GUERRY: I can’t really speak to that.

ACOSTA: What about what Dr. Ford is alleging? Was this the first time you'd heard anything like that with respect to Judge Kavanagh?

GUERRY: Absolutely. It’s not the first time I’ve heard anything like that in terms of the community of women that I know — not regarding him — but –

ACOSTA: But those sorts of things went on?

GUERRY: One of the things that’s surprising to me as I’ve got on involved in this in the last couple of days is how many women of my class have come forward to me in this last few days and said, 'I had similar experiences in high school.' And this hits me very deeply –

ACOSTA: Not with Brett Kavanagh, but with other boys?

GUERRY: Not with Brett Kavanagh but with other boys in our community, and we all feel that if we were in her shoes, we would want to be taken seriously as well.

That description of Kavanaugh's behavior, offered by someone publicly standing by his accuser, doesn't seem very different from the description provided by his supporters. So maybe CNN should take the word of his supporters a bit more seriously.

Thanks to MRC's Geoffrey Dickens and Bill D'Agostino for helping with the research for this item.