The latest Zogby poll asked: “Compared to four years ago, how trustworthy do you think the mainstream media is? When we say mainstream media, we mean network newscasts – NBC, CBS, and ABC, along with large newspapers such as the New York Times, L.A. Times, and Washington Post?” 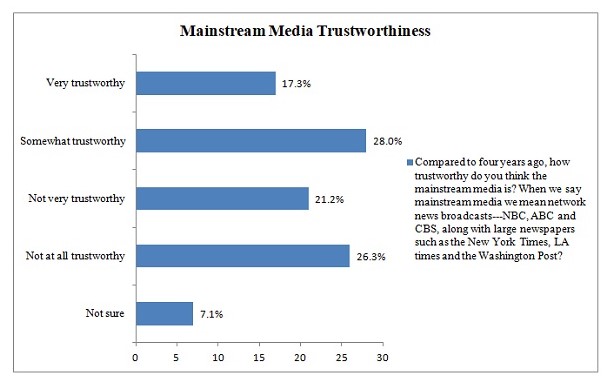 As usual, two-thirds of Democrats say they trust the Democrat-friendly media, while 69 percent of Republicans don’t find them trustworthy. Likewise, 52 percent of men found the “MSM” untrustworthy, while a plurality of women (47 percent) believe they are trustworthy.

“What is obvious is the erosion in trust of the mainstream media, which did not happen when Trump announced his candidacy. People have been turning away from major newspapers and network news for years. With new technology available, people get information from many different sources these days. What's true is the partisan element the mainstream media has taken on in recent years, and that's reflected in our polling data and their bottom line,” said the poll analysis from Jonathan Zogby, the CEO of Zogby Analytics.

Zogby polled more than 1,500 Americans, and the margin of error is 2.5 percent.