A new American President is always a big story, but TV news is obsessed with the Trump administration — and not in a good way.

In the first 30 days (January 20 to February 18), our analysts determined that the President and his team were the subject of 16 hours of coverage on just the Big Three evening newscasts. This equates to more than half (54%) of all of the news coverage during this period. 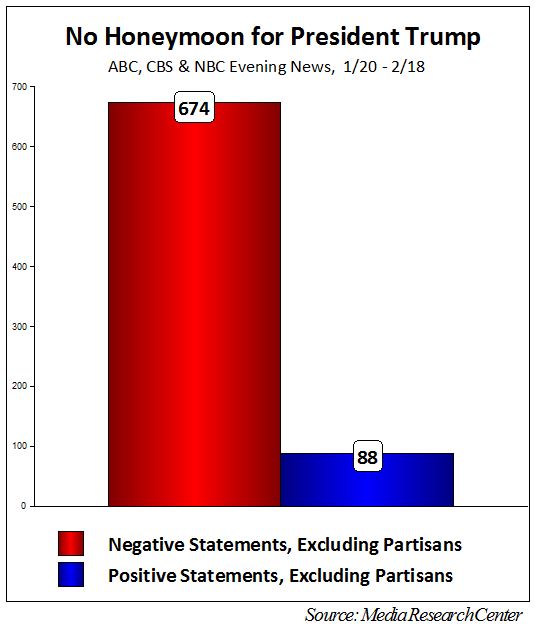 While most new presidents enjoy a media honeymoon, the tone of Trump’s coverage was nearly as hostile (88% negative) as we found during last year's presidential campaign (91% negative).

Our measure of media tone excludes soundbites from identified partisans, focusing instead on tallying the evaluative statements made by reporters and the non-partisan talking heads (experts and average citizens) included in their stories. In their coverage of Trump’s first month, the networks crowded their stories with quotes from citizens angry about many of his policies, while providing relatively little airtime to Trump supporters.

And the networks’ anchors and reporters often injected their own anti-Trump editorial tone into the coverage. “It has been a busy day for presidential statements divorced from reality,” CBS Evening News anchor Scott Pelley snidely began his February 6 broadcast.

“Instead of working to clarify or backtrack on President Trump’s false claims,” NBC’s Hallie Jackson scolded on the January 24 Nightly News, “today his press secretary instead tried to cement them.”

The biggest controversy during President Trump’s first month in office was the temporary ban on immigration from seven countries compromised by Islamic terrorism (Iran, Iraq, Libya, Somalia, Sudan, Syria and Yemen). The three evening newscasts spent more than 3 hours (188 minutes) on this topic alone, accounting for about one-fifth of all of the Trump administration’s coverage.

Network coverage provided a megaphone to those distressed by Trump’s action, with NBC’s Lester Holt on January 30 beginning his newscasts from “the Statue of Liberty, which for nearly 130 years has symbolized the welcome arms of a country of immigrants.” As for Trump’s temporary ban, Holt quoted anonymous “critics” who “call it a solution in search of a problem, and an unconstitutional and thinly-disguised ban on Muslims.”

A range of other immigration initiatives (the border wall with Mexico, a crackdown on sanctuary cities and increased deportation of criminal illegal aliens) accounted for 62 minutes of network airtime. Most of this coverage was sympathetic to those newly at risk for deportation; for example, ABC’s Jim Avila, on February 11, cast it as a “stern warning to all 11 million undocumented living in the United States, most of them law-abiding and paying taxes and working, that they are no longer safe to stay here.”

The scandal surrounding ousted National Security Advisor Michael Flynn accounted for 48 minutes of coverage, while the rest of the Trump administration’s complicated relationship with Russia garnered 44 minutes of coverage. Rounding out the Top Five: Trump’s nomination of federal Judge Neil Gorsuch to the Supreme Court to replace the late Justice Antonin Scalia (32 minutes).

Further highlighting the hostile tone of these newscasts, nearly an hour of coverage (56 minutes) was given over to anti-Trump protests on various topics, with nearly one-fifth (82 out of 442) of the Trump stories or briefs aired during these 30 days including at least some discussion of an anti-Trump protest.