In this issue: The news media reward Donald Trump with a “honeymoon” as unfriendly as their campaign coverage, with journalists blasting the President-elect as a “racist,” “authoritarian” and a “demagogue,” while some cast his election as “tainted” and potentially “illegitimate” because of Russia’s hacking.

Also: Lacking all self-awareness, the disgraced ex-NBC Nightly News anchor Brian Williams frets about “fake news,” Time’s Joe Klein claims there was “absolutely no hint of scandal” during Obama’s eight years in office, while actress Megan Mullaly swoons over the Obamas as “the greatest President and First Lady in any of our lifetimes.” 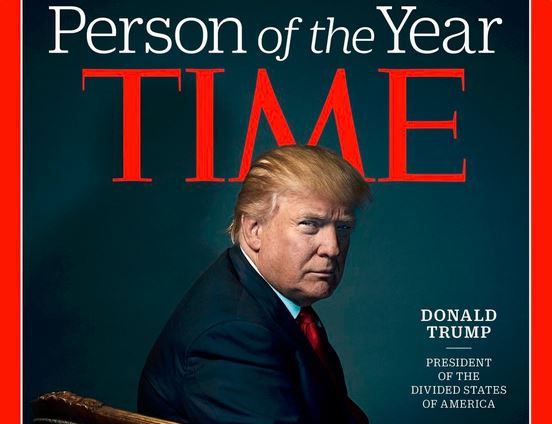 “No presidential candidate in American history had done or said so many outlandish and offensive things as Trump. He cheered when protesters got hit at his rallies, used sexist insults for members of the press....This is the method of a demagogue. The more the elites denounced his transgressions, the more his growing movement felt validated.”
— Writer Michael Scherer in cover story for Time’s December 19 “Person of the Year” issue.

“He is entertaining up at that podium — I love watching these rallies for that reason. On the other hand, John, I talk to international correspondents who say to you, ‘This is exactly what authoritarians do. This is what strongmen do. This is what happens in authoritarian regimes.’ I think we need to start using those words on TV, at least, to discuss the possibilities before us.”
— Host Brian Stelter to former Fortune editor John Huey on CNN’s Reliable Sources, December 4.

“There are some real elements of authoritarianism in the approach that Donald Trump takes to government — his admiration for Putin. These things are troubling. We live in an open system, in a democratic system, small ‘d,’ where America is supposed to be allergic to authoritarianism, but we’re seeing how easily Americans slip into it, and I think we have to be on guard, particularly in the media, against allowing ourselves to, sort of, slip casually into authoritarianism.”
— MSNBC’s Joy Reid on NBC’s Meet the Press, December 25.

“It is a fact that the Trump campaign gave a platform to white supremacists. The only question is whether the Trump presidency will do the same. Many Americans who voted for Trump may not consider themselves racist, but they cast a ballot for a candidate who espoused racism and xenophobia and told lie after lie without remorse. They have to take responsibility for their decision, and so do the people who choose to work for Trump.”
— New York Times columnist and former editorial page editor Andrew Rosenthal, December 7.

Is Trump as Crazy in Private as He Is in Public?

“Here’s something many people wonder: Does he say the same bizarre things to you in private that he says in public?”
— Anchor Scott Pelley asking House Speaker Paul Ryan about President-elect Donald Trump in an interview shown on the December 4 CBS Evening News.

“So this was a tainted election. It was not, as far as we can tell, stolen in the sense that votes were counted wrong, and the result won’t be overturned. But the result was nonetheless illegitimate in important ways; the victor was rejected by the public, and won the Electoral College only thanks to foreign intervention and grotesquely inappropriate, partisan behavior on the part of domestic law enforcement. The question now is what to do with that horrifying knowledge in the months and years ahead.”
— New York Times columnist Paul Krugman, December 12. 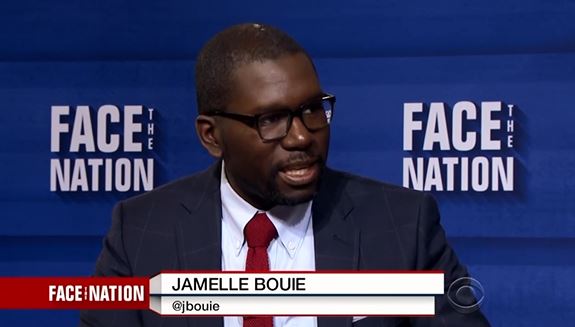 Host John Dickerson: “We heard about Russian involvement potentially while the election was going on, but what seems to be new is that it was targeted to help Donald Trump....”
Slate writer Jamelle Bouie: “It really is unprecedented. And if — if it is true, if we have further verification of this, then what it suggests potentially is that the election was in some sense illegitimate. And I don’t know where you go from there.
— CBS Face the Nation, December 11.

“Biggest winner? Vladimir Putin. He did it. He did it. He did what Gorbachev couldn’t do, what Castro couldn’t do. He basically took over the United States and got himself a Manchurian candidate and that is something no other Russian leader has been able to do. He’ll be cheering about this and it will be in history books for the next 50 years. It’s a coup. It’s an amazing coup.”
— The Root’s Jason Johnson on MSNBC’s Hardball, December 21, during a segment on the biggest winners and losers of 2016.

Host Thomas Roberts: “We have to question the America First model of Donald Trump because he’s, right now, putting himself to doubt the U.S. intelligence and putting Putin first.”
Correspondent Katy Tur: “He’s putting ‘Donald Trump First’ before ‘America First.’...He is putting Putin before the American public, siding with them, saying absolutely, they had nothing to do with it, there is no evidence. You cannot prove it unless you find somebody in the middle of hacking.”
— MSNBC Live, December 15. 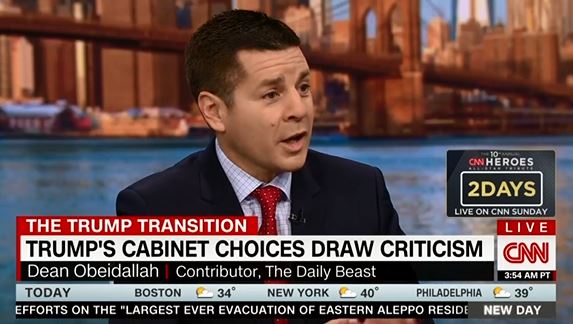 Saddened by the Lack of Big Government Liberals

“Seven men and one woman named by Mr. Trump to run vast government agencies share a common trait: once they are confirmed, their presence is meant to unnerve — and maybe even outright undermine — the bureaucracies they are about to lead. Some of those chosen — 17 picks so far for federal agencies and five for the White House — are among the most radical selections in recent history.”
— Correspondent Michael Shear in a December 18 front-page New York Times article, “Outsiders Selected by Trump Aim to Unnerve Washington.”

“When read together, Trump’s [presidential campaign] announcement and [Charleston church shooter Dylann] Roof’s manifesto offer a duet in racial grievance...Trump has broadcast racial propaganda and anti-Semitic messages....Roof’s depiction of black Americans as violent and dangerous is just a few steps away from Trump’s depiction of black communities as violent and dangerous hellscapes that threaten the safety of the entire nation....The same white nationalists who led Roof down a path of hate and evil now gather in Washington, D.C., to celebrate the election of Trump as a triumph for their movement.”
— Slate’s Jamelle Bouie in a December 15 article, “Brothers in White Resentment; What gave us Donald Trump is what gave us Dylann Roof.” 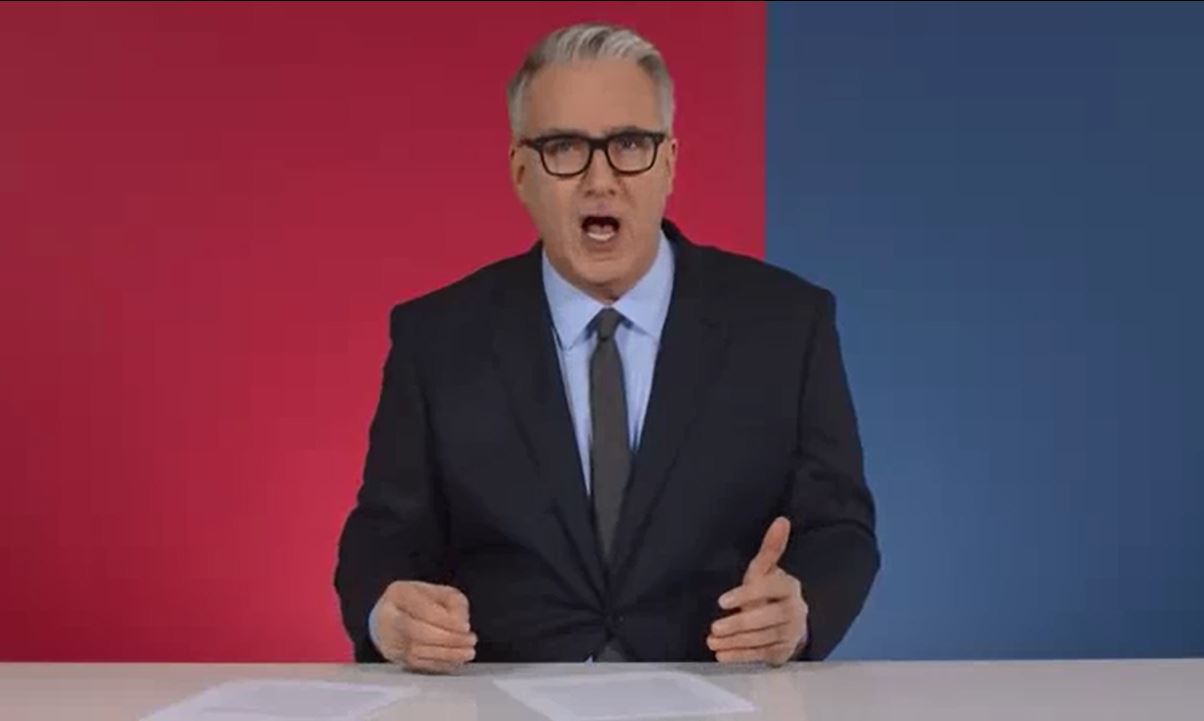 “These are not words of sanity! These are the rages and the boasts and the madness that we have seen throughout history: Saddam Hussein, Mussolini, Fidel Castro, Mao Tse Dung, Stalin, Pol Pot, bin Laden, Hitler.”
— Ex-MSNBC host Keith Olbermann talking about Donald Trump in a video message for The Resistance on GQ.com, November 29.

“There would be little melodrama and absolutely no hint of scandal during his time in office. The conservative fever swamps would be no less pustulent than they were during the Clinton presidency — indeed, the level of race-based hatemongering was frightening — but somehow the Obamas never let it get to them. They radiated a sense of militant normality, a mother-knows-best family on the world’s brightest stage.”
— Time’s Joe Klein writing in the magazine’s December 19 issue.

“In the weeks since the election, some Americans have found a new folk hero in a familiar face: Hillary Clinton, comfortably dressed suburban retiree. Within hours of her loss, a steady stream of photos began surfacing of supporters posing with her as she took part in lazy-day activities: There’s Hillary, walking in the woods of Chappaqua, N.Y.; Hillary browsing the aisles at an independent bookstore; Hillary shopping for Thanksgiving dinner at the market; and Hillary walking in the woods of Chappaqua again, this time with Bill. Adam Parkhomenko, a longtime Clinton aide, has started a Twitter account, @HRCInTheWild, for tracking the spontaneous sightings.”
— New York Times writer Amanda Hess in a December 2 article.

Expect President Trump to Blow Up the Whole Planet

Host Chris Hayes: “Trump’s comments about nuclear weapons have experts worried he could literally, inadvertently trigger a catastrophe....”
Esquire’s Charles Pierce: “We have what, I think the total is 7100, individual nuclear warheads. I don’t even want to know what the destructive capabilities there. And we’re about to hand the launch orders over to a guy who can’t stay away from his phone for 15 minutes.”
— Exchange on MSNBC’s All In with Chris Hayes, December 27.

“As we talked about here last night, fake news played a role in this election and continues to find a wide audience.”
— Host Brian Williams, who had to quit as the anchor of NBC Nightly News because of lies, on MSNBC’s The 11th Hour, December 6. 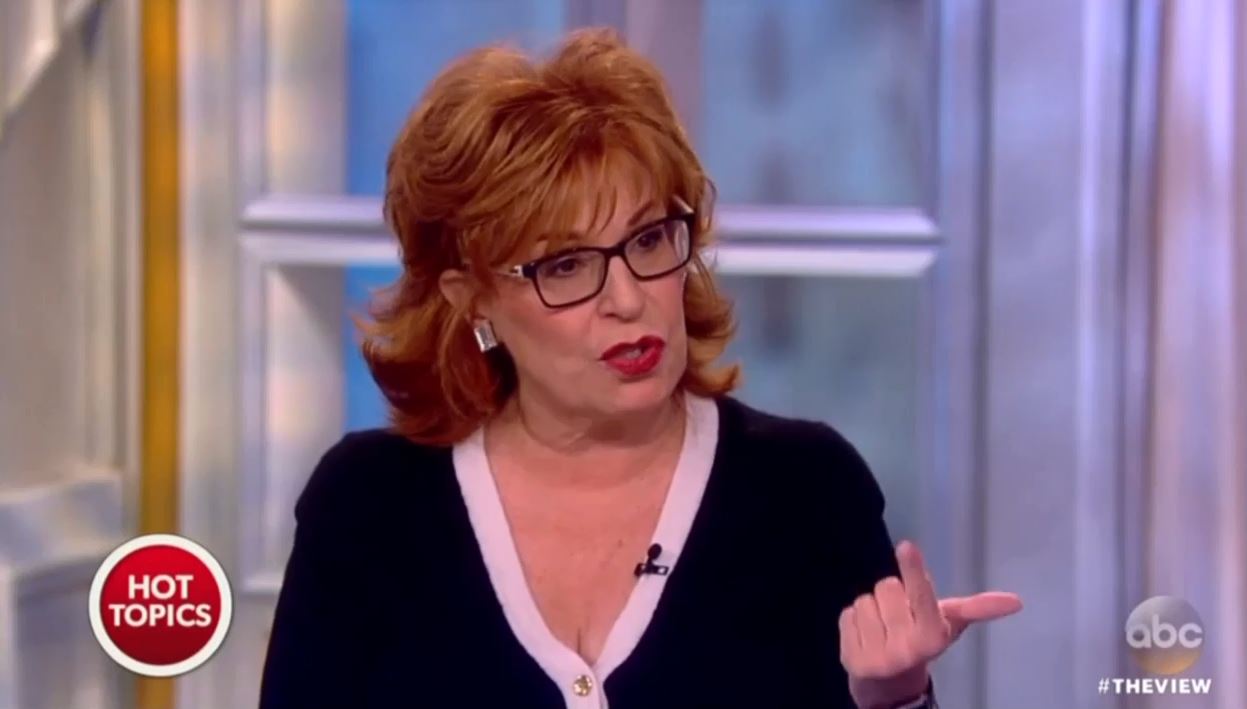 “Yes, we’re sore losers, because a lot of the reason he won was based on racism, the Russian hackings. Lies. Continuous lying that went on. And the intrusion of the FBI at the last minute there. All of that seems to have basically distorted the whole election. So, yeah, we’re sore losers. Because it wasn’t really won legitimately, as far as I’m concerned.”
— Co-host Joy Behar on ABC’s The View, December 2.

“Mrs. Obama is not only a woman to watch in American politics, but also considered the coolest First Lady in U.S. history....With every song, every laugh, and every daring style choice, the power of Michelle Obama’s personality and authenticity has made her a pop culture icon.”
— Host Oprah Winfrey during CBS’s one-hour December 19 prime time special, First Lady Michelle Obama Says Farewell to the White House.

Trump: Just What You’d Expect from “Dumb” and “Racist” America

“It [the election outcome] is disturbing on so many levels. One, that we have elected an inept racist as president. Two, just seeing how dumb and delusional so many Americans are. Because really — in terms of the subsets of people who would vote for Trump — you have to be delusional, or racist, or stupid. I am so confused as to the fact that such a high percentage of Americans are either really stupid or incredibly bigoted....There are a lot of really, really dumb people.”
— American pop musician Moby, as quoted by writer Kate Mossman in a December 9 profile published in Britain’s The New Statesman magazine.

Obama = The Greatest President of Our Lifetime

“He was charming and amazing, and then I said, ‘Listen, I really love you and we don’t want you to go. And he gave me a hug and he said, ‘We’re not going anywhere.’ And he walked out the door and, I mean, I’m not talking about like the cute, single tear — I mean, burst into wrenching sobs, doubled over....I mean, that’s the greatest President and First Lady in any of our lifetimes.”
— Actress Megan Mullaly talking about meeting the Obamas at White House Christmas party on CBS’s The Late Show with Stephen Colbert, December 14.