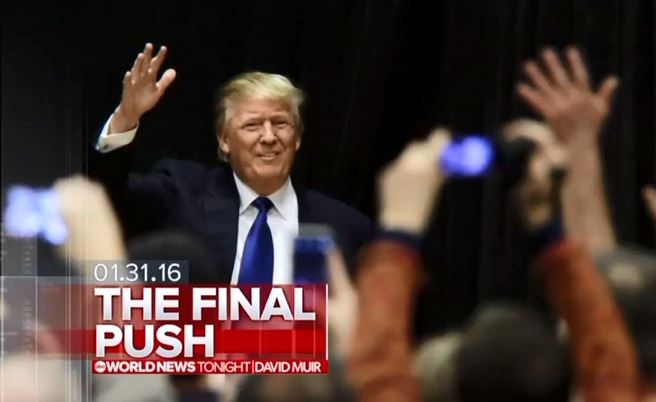 For months, one of GOP presidential frontrunner Donald Trump’s major advantages has been the establishment media’s decision to cover his candidacy to the near-exclusion of his Republican competitors. A new analysis by the Media Research Center finds Trump continued to receive the vast majority of TV news coverage throughout the month of January, leading up to tonight’s crucial Iowa caucuses.

An examination of all campaign coverage on the ABC, CBS and NBC evening newscasts from January 1 through January 31 finds Trump received nearly 157 minutes of airtime, or almost 60 percent of the total coverage of GOP presidential candidates. Texas Senator Ted Cruz received half as much coverage (79 minutes, or 30%), while Florida Senator Marco Rubio received a grand total of ten and a half minutes of coverage (4%).

None of the other Republican candidates received even ten minutes of airtime during the entire month of January. 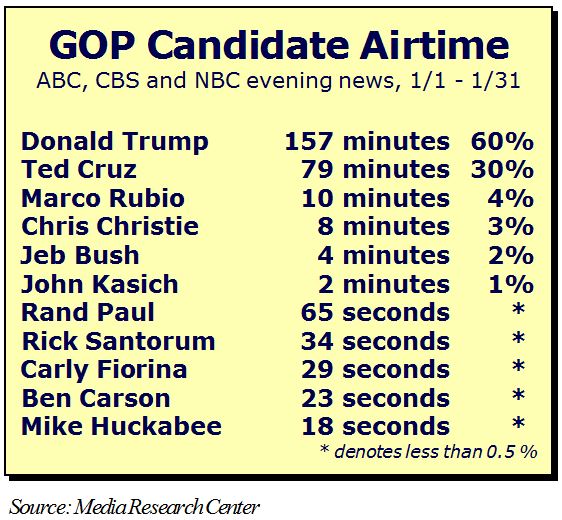 With January now in the books, Trump’s entire campaign has thus far received a whopping 736 minutes of coverage on the three evening newscasts. Former Florida Governor Jeb Bush has received 154 minutes of total airtime (although not much recently), while Ted Cruz is in third place with 142 minutes of TV news coverage.

The networks’ obsession with Trump continues a trend that began in July, when Trump alone received more than 70 percent of the coverage of a crowded field of Republican candidates. While Trump’s share of the GOP total dipped below 50 percent in October and November, in each of the last seven months he has received far more coverage than any of his individual competitors.

In July, the nearest rival to Trump in terms of network airtime was Wisconsin Governor Scott Walker, who declared his short-lived candidacy that month. Walker in July received 13 minutes of network evening news coverage, far behind Trump’s 99 minutes that month.

In August, Trump received 117 minutes of coverage, vastly exceeding the 19 minutes given to Jeb Bush, who came in second that month. In September, October and November, neurosurgeon Dr. Ben Carson’s campaign came closest to rivaling Trump’s in terms of total airtime, but Carson’s total for those three months (89 minutes) never came close to Trump’s total for the same time period (209 minutes).

In December, Ted Cruz became Trump’s chief competitor for airtime, but his 38 minutes paled in comparison to the nearly 137 minutes of coverage showered on Trump that month.

If Trump prevails in Iowa tonight and New Hampshire next week, he might want to consider thanking the national news media, who have consistently kept their focus on the GOP frontrunner, while paying little attention to the rest of the field.