No Labels for Liberal Joe Biden, But for Sarah Palin... 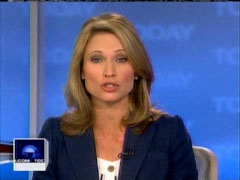 But seven days earlier, as those same programs reacted to the Obama campaign’s text message heralding Joe Biden as the Democratic vice presidential candidate, none of those broadcast found a moment to call him “liberal,” in spite of Biden’s lengthy record of liberal votes as determined by the nonpartisan National Journal.

Here’s a quick rundown of how the three broadcast networks emphasized Palin’s ideology on their August 30 programs:

-- DAVID WRIGHT: For the GOP, this is a first....a chance to make history and, for McCain, reach out to two key constituencies....women and conservatives. The youngest of Palin's five children, born in April, has Down's syndrome, but she never once considered an abortion, on moral grounds. Palin's conservative values make her the kind of candidate some think the party needs.
MATTHEW DOWD: I think it will create an unbelievable amount of energy among that group in the Republican party. 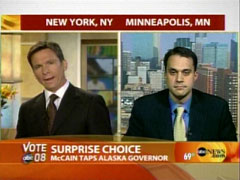 -- BILL WEIR, interviewing McCain staffer Mike DuHaime: Governor Palin, on the record, opposes abortion. She opposes gun control, the theory of evolution, uh, being taught in schools. Also, she disagrees with the belief that global warming is manmade. That, all of that, may thrill Christian conservatives, but why would a feminist Hillary Clinton supporter vote for that ticket?

-- KATE SNOW, to ABC’s Cokie Roberts: She is quite conservative, right? I mean she's, as Bill pointed out, she’s anti-abortion, she’s for gun rights. She's got quite a conservative record.

CHIP REID: On most issues, she is reliably conservative, from taxes to abortion, which she fiercely opposes. And her selection has been praised by many conservative activists. But Democrats and some Republicans have sharply questioned why McCain would choose someone with virtually no experience in foreign policy, especially after he criticized Barack Obama as "not ready to lead."

AMY ROBACH: And now to the other big headline of the morning: John McCain's running mate, Alaska Governor Sarah Palin, a staunch conservative and 40-something mother of five. The new GOP ticket is set to spend the first full day together on the campaign trail. NBC's Kelly O'Donnell is in Pittsburgh....
O'DONNELL: At 44, Sarah Palin has been governor of Alaska less than two years...Married to a commercial fisherman and mother of five, Palin is a social conservative -- against abortion and for gun rights -- who could energize the party base.