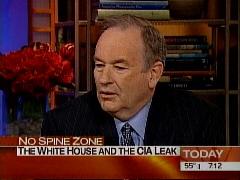 Maybe somebody at NBC wasn’t too happy that this morning’s Today hosted FNC star Bill O’Reilly. Right at the start of O’Reilly’s interview with Katie Couric, the on-screen graphic included the words: “No Spine Zone,” maybe a mere misspelling of O’Reilly’s trademark “No Spin Zone,” or perhaps a derogatory shot at their cable news competitor. We'll report, you decide.

Either way, the words were quickly taken off the screen and replaced a few moments later with “No Spin Zone.” Later in the interview, though, Couric did seem to chastise O’Reilly: “Is there any way, though, that you could do this job and be more conciliatory?” She wondered, “Could we have more intelligent conversations about these divisive issues?”

For the rest of Couric’s interview, where O’Reilly huffed about both the “hard left” and the “hard right,” check out Mark Finkelstein’s item on NewsBusters.
NBC Today O'Reilly Factor