Since MSNBC and CNN are both liberal “news” outlets, it certainly comes as no shock when they quote information from each other and consider those assertions to be 100 percent accurate without verifying any of them.

That was the case on Tuesday, when the co-hosts of MSNBC’s Morning Joe cable TV program quoted results from a survey conducted by CNN just hours before the Senate impeachment trial got underway.

Just over half of Americans say they believe the Senate should vote to convict and remove President Trump from office...

[Sixty-nine] percent say that the Senate impeachment trial should include testimony from new witnesses; 26 percent disagree. That’s an important number.

Scarborough responded that the survey statistics were “unbelievable” before stating: “If you’re in one of these swing states -- actually, if you’re in any state -- some of these numbers should send a real message to you if you’re a United States senator and you’re trying to figure out whether you want … a fair and open trial.”

Of course, Scarborough never referred to the part of the poll that revealed people in swing states split evenly, with 49 percent each supporting and opposing impeachment. Also, Trump’s overall approval and disapproval numbers were unchanged from last month.

So exactly how is that “devastating?”

Overall, Trump averaged 42% job approval during his third year in office, an improvement over his 38% first-year and 40% second-year averages....Trump's third-year average is not far behind Obama's 44.5% or Reagan's 44.9% averages at the same point in their presidencies. 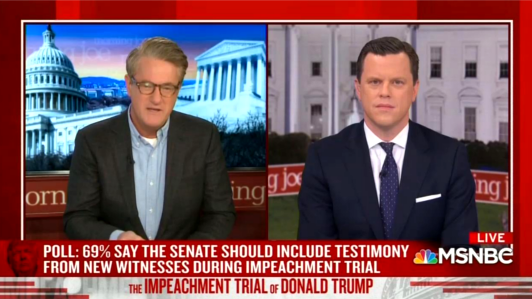 But Scarborough pressed on. “[F]or so many of those members of Congress,” the host noted, supporting the President “made sense because they’re in gerrymandered districts where Donald Trump is sitting, enjoying a 60, 70, 80 percent approval rating. Not so in Arizona, in Colorado and in Maine” or several other states.

The anchor then claimed that Republicans, including Senate Majority Leader Mitch McConnell, Senator Lindsey Graham and President Trump, have “lost that argument” on impeachment.

Scarborough noted as he turned to co-host Willie Geist. “How does [Trump] get away with lying? How does he get away with saying the things that he says? Why are people so stupid that they believe him when he lies? That it was a perfect call? They don’t believe him. They know he’s lying. They demand accountability. Will these United States senators on the Republican side of the aisle listen?"