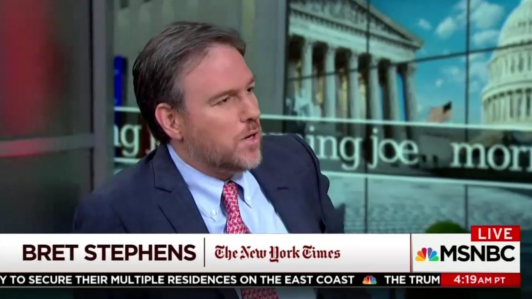 The ongoing battle between New York Times columnist Bret Stephens and George Washington University media professor Dave Karpf took another bizarre turn on Thursday, when Stephens pulled out of a scheduled debate with Karpf because the clash would not be closed to the public.

Intended as the end of a feud between the two men that began back in August -- when the professor compared the columnist to a “bedbug” in a post on Twitter -- the event was slated to take place on October 28 in Washington, D.C., until Stephens pulled out.

According to an article written by Reed Richardson, a writer and editor for the Mediaite.com website:

[T] he Times columnist had previously accepted the public invitation [from GWU], which offered to host an open discussion about civil online discourse featuring himself and Karpf.

But right before the final details of the event were completed, Stephens reportedly raised a series of concerns to the organizers, which ultimately led him to pull out of the debate.

Richardson also noted that Stephens is a “vigorously selective defender of free speech” who “infamously stepped on a series of rakes” regarding the debate.

He also quoted Karpf as stating: “The thing that I can share is [Stephens] had decided that he was only willing to come if we made it not a public event.”

“Students could be in the room, but he didn’t want to allow this story to continue anymore,” the professor added. The pupils “talked with him, and what it came down to was the only way he’d do the event is if the public wasn’t allowed to see it.”

Richardson noted that “Stephens has used his prestigious perch at the Times  to routinely chastise and mock college students as being too self-selectively sheltered from other points of view," which is ironic considering he seemed too afraid to do a public debate.

As NewsBusters reported in late August, the feud began when there was an outbreak of bedbugs in the NYT newsroom, and Karpf made a joke comparing Stephens to the annoying pests.

Stephens had previously compared Republicans to murderous dictators and said the “serpent” Ted Cruz would sell his family into slavery.

Richardson also posted that Stephens sent an angry email to the professor’s boss and received a hostile response to his column on Twitter.

When the columnist was a guest on MSNBC soon after the fight began, he huffed: “Using dehumanizing rhetoric like bedbugs or analogizing people to insects is always wrong.. ... We can do better. We should be the people on social media that we are in real life.”

Then on August 31, NewsBusters stated that Stephens had doubled down on his fury and compared Karpf – a Jewish professor -- to Adolf Hitler.