2020 Dem, Polling at Less Than One Percent, Whines That Fox Won’t Give Him a Town Hall 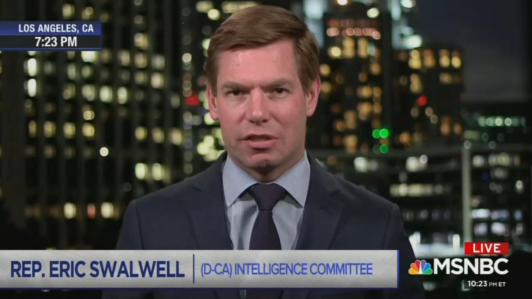 While the number of candidates in the Democrats’ 2020 presidential primary continues to grow, one of the most controversial issues liberals face is whether or not to participate in a town hall conducted by the Fox News Channel.

However, California Democratic Rep. Eric Swalwell claimed on Wednesday that the network -- which dominates the ratings among cable news channels -- had rejected his request to take part in another town hall on FNC.

During an appearance Wednesday on CNN, the candidate stated:

I would absolutely do a Fox town hall, but they told us we can’t have one, which is a little bit confusing to us because they have given them to people who are polling at the same place as us.

I can only conclude that they are afraid to give me the opportunity.

One might also point out that Swalwell is registering at one percent in one poll and not even that in the Real Clear Politics average. The Congressman might not even make the Democratic debates as he would have to make the one percent threshold level, something he’s currently not doing. Maybe Fox thinks no one could pick him out of a lineup.

On CNN, Swalwell said he found it "frustrating" that Fox News was “bemoaning that the Democrats won't do the debates” on the network while it simultaneously turned down his offer for a town hall.

He added that the network did not provide the criteria it was using to determine which candidates it offers such events to.

According to an article by CNN media reporters Brian Stelter and Oliver Darcy, a spokeswoman for the FNC responded that the channel “has left the door open for a future opportunity” with Swalwell.

Stelter and Darcy also noted that Democratic National Committee Chairman Tom Perez said that Fox News will not be included in the mix of networks that will host Democratic primary debates in the months to come.

“Perez himself occasionally appears on the network and hasn't taken a position about others doing so,” they added before noting most of the candidates “aren't risking a public battle with the country's most-watched cable news network.”

As part of the interview on Wednesday, Swalwell stated that he disagrees with the position taken by Massachusetts Senator Elizabeth Warren, who on Tuesday slammed the channel as a “hate-for-profit racket” while rejecting their offer.

Fox News has already hosted such gatherings featuring senators Bernie Sanders of Vermont and Amy Klobuchar from Minnesota and will conduct one with South Bend, Ind., Mayor Pete Buttigieg on Sunday and another with Sen. Kirsten Gillibrand from New York on June 2.

It shouldn’t come as a surprise that when it suited him, Swalwell has been a guest on a number of Fox News programs. His most outrageous accusation regarding the Republican President came during the July 18 edition of Tucker Carlson Tonight.

That was when the host pressed him on the Congressman’s bizarre claim that Trump was a traitor and therefore committed a “capital offense” that could result in him receiving the death penalty.