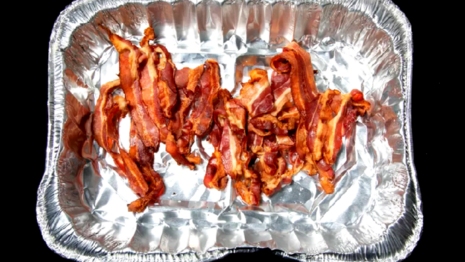 Remember "funemployment?" That was a concept introduced during the Obama administration during 2009 to make people feel better about rampant unemployment by portraying it as a fun thing.

Well, flash forward to the inflationary era of 2022 during the Biden administration and National Public Radio has come up with something similar. Not the "Whip Inflation Now" (WIN) of the 1970s but more of an upbeat version that makes inflation sounds like a creative challenge or Winflation. And as part of the Winflation challenge, NPR has come up with what they think are creative ideas for whipping inflation during Thanksgiving dinner.

Picture the scene: The Thanksgiving guests are seated around the dinner table and eagerly anticipating the traditional dinner when the host reaches into the oven and pulls out a tray of... bacon. Imagine the depressing letdown of the guests when they realize it is no joke and they won't be eating turkey. Nothing could be destroy the mood more except perhaps if the host also presents his substitute for stuffing... sliced tomatoes.

I kid you not, that is exactly what NPR recommended on Tuesday in "Inflation won't win Thanksgiving: Here's NPR's plan to help you save on a meal."

Turkey is by far the most expensive thing on the table. Turkey prices have risen about 50% in the last two years, largely because of production slowdowns and an outbreak of avian flu. On average, a 16-pound bird will run you $28.96 and stuffing (prices are up about 70%) will run you $3.88.

NPR Global Economics Correspondent Stacey Vanek Smith decided she would stick with meat for the main dish (many vegetarian options are cheaper), even though that's not easy. Meat prices have risen significantly across the board: Beef, chicken, fish and even Spam are all pricey. So Stacey opted for pork. Specifically: bacon.

Stacey's local grocery store was selling family packs of bacon for just $4 apiece. And, of course, a little bacon goes a long way.

Instead of stuffing, Stacey sliced some tomatoes — a relative bargain that she hoped could be put to use with leftovers to create a new holiday tradition: The Thanksgiving BLT.

You have to wonder about the gastronomic sensibilities at NPR when it was recommended that, in the name of fighting inflation, mashed potatoes be replaced by... mashed beans.

The price of Russet potatoes is up more than 20% and the price of the milk needed to whip into the potatoes, up 16%.

Finally, the NPR Thanksgiving dinner substitution game includes an item that most of us have been avoiding since we were babies, namely baby food.

Finding a butter substitute turned out to be the biggest challenge. Margarine prices are up more than 40%. Jelly, jam, and peanut butter prices have all skyrocketed. So Alina went on a hunt in her grocery store and found...baby food.

Baby food prices have risen a lot more slowly than butter or margarine.

Nowhere in this dreary tableau is there any mention that inflation could be associated with the Biden administration or the Democrats for their massive domestic spending.

The strange thing is that NPR types like to present themselves to the public as urbane sophisticates yet they seem too clueless to realize that serving such food for Thanksgiving would instantly turn them into pariahs among all their dinner guests to the extent that besides no one ever attending their Thanksgiving dinners again, they would probably never be invited to one by anyone present as punishment for serving up that recommended disaster of a dinner.

Oh, and has NPR estimated the cost of replacing the plates and glasses smashed by their disgusted Thanksgiving guests?