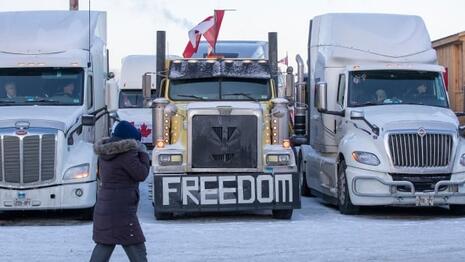 Did you just hear "Heil Hitler!" as Canadian Liberal MP Ya'ara Saks hilariously fantasized? Nope! In fact you probably heard nothing at all because there is a new ailment that liberal residents of Ottawa are suffering from, "phantom honking."

It has become so severe that the tax-funded Canadian Broadcasting Corporation reported on it on Saturday in a most serious manner, "The trucks have left Ottawa, but 'phantom honking' lingers for many downtown."

Reporter Nicole Williams dug into the details of this phenomenon sans any sense of the hilarious absurdity of it all:

The trucks have since been removed, with police pushing the majority of protesters outside of the downtown core over the Family Day long weekend. Even still, some downtown residents say they're haunted by "phantom honking" — what sounds like blaring truck horns, but no actual sounds are there.

"When you hear that noise, it's like, 'Oh, are they back? Is there a road convoy coming back, right?'" said Sean Flynn, who lives about three kilometres from downtown but could still hear the horns inside his home during the protests.

"'I felt I was constantly doing these sort of double takes ... it almost feels a bit re-traumatizing."

"It's hard to explain because I think with any post-traumatic stress-induced thinking, it's not very rational. You're not actually hearing honking," he said, adding he experiences "constant on-edgeness" and "fear" any time he steps outside since the protests.

In comes the media-selected expert:

"These sounds become sort of embedded in mind, kind of like the way trauma leads to flashbacks," said Liu. "Even long after this has happened, the brain is still in a hyper-vigilant state and expects more honking."