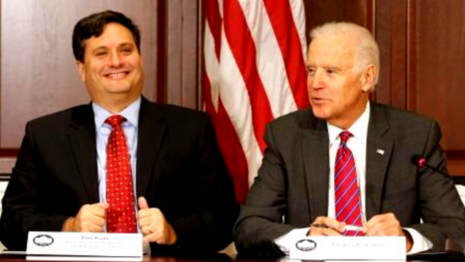 So who would write the latter article? None other than liberal shillmeister Al Hunt. And what is really funny is that Hunt's article, which was originally published in The Hill on Sunday, was promoted on Twitter by Klain, for which he got widely mocked.

The title of Hunt's article, "Let's be honest: 2021 wasn't all bad," was absurd but when you read the text below it is like something from a parallel Pollyanna universe:

The economy is humming

The unemployment rate is down to 4.2 percent, the lowest since the pandemic hit, and it’s expected to decline further next year. Economic and wage growth are robust.

“All the key indices, except inflation, are pointing strongly in the right direction,” says Roger Altman, the senior chairman of Evercore, a leading global investment bank.

Total wages, including extra hours of work, are slightly outpacing inflation. More workers are quitting because of better opportunities. Household net worth is up an astounding 20 percent from a year earlier. Bloomberg reported in ten key measurements of the economy, Biden has the best first year record of any president in the last 50 years.

So the economy is all great... except for that minor bit about inflation being at the highest rate in over 40 years. So much for transitory inflation. Otherwise, the economy is humming along...except for the many small businesses forced to close this past year due to Covid restrictions.

And now for more about the wonderfulness of 2021 according to the gospel of Albert Hunt:

That's the way it should be, but isn't always.

Think back four years ago: The Trump administration looked more like “The Godfather” — without the skill. The national security adviser and HHS secretary were caught in illicit or unethical activities and were out. Investigations were launched of the heads of the EPA and Interior Department, and they were out the next year.

A scandal-free Biden administration? Perhaps Hunt still believes a certain Laptop from Hell (10 for the "big guy") is just Russian disinformation. Something for Al to think about if he attends one of Hunter Biden's art shows with works from the great Vincent Van Dough starting at $75,000 a pop. It even beats doing nothing while working for Burisma at a measly $64,000 per month.

And as to competence. Hey, who could have handled the Afghanistan withdrawal better than Joe Biden? We save a ton of money in transportation costs by leaving behind billions of dollars worth of military equipment for the Taliban to use. Maybe now the Taliban will implode over a military supply chain crisis.

And the big seal of approval from Ron Klain for this over-the-top flack job earned a good laugh on Twitter.